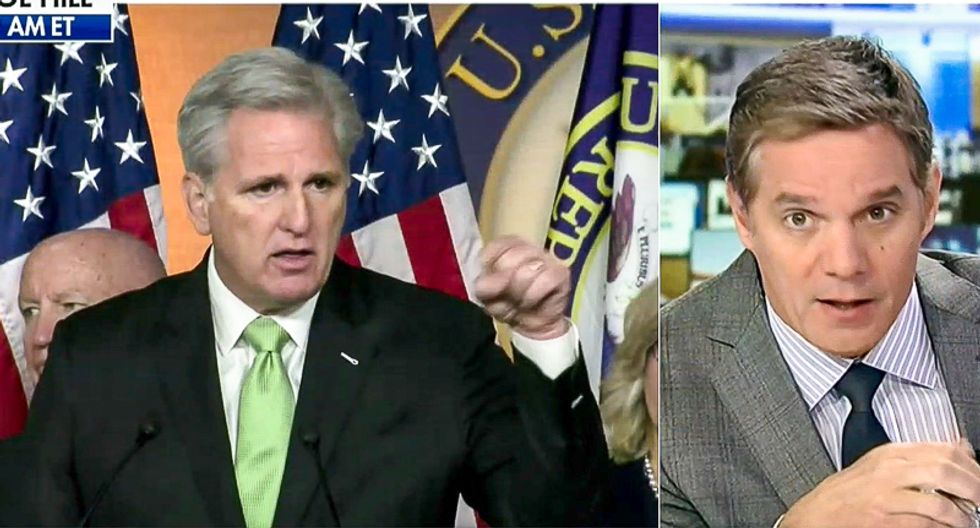 Fox News and other cable outlets cut off House Minority Leader Kevin McCarty (R-CA) on Tuesday as he was denouncing articles of impeachment that were introduced by Democrats moments earlier.

McCarthy reacted to the articles of impeachment by attacking the Democrats' process instead of mounting a defense of President Donald Trump's alleged abuse of power.

"Nothing on that phone call is wrong," McCarthy said of Trump's telephone call with the president of Ukraine. "If somebody is an elected official and they did something wrong but they run for another office, somehow what they did is not wrong anymore?"

"We're talking about the highest elected office in this land and in this entire world," he continued. "They are so brazen that they will change the rule of law to impeach him."

According to McCarthy, House Speaker Nancy Pelosi (D-CA) held up the president's North American trade agreement until articles of impeachment were ready.

"She wished we'd go into a recession," he charged.

At that point, Fox News host Bill Hemmer cut off the GOP leader, noting that he had "talked about deplorables at least three times."