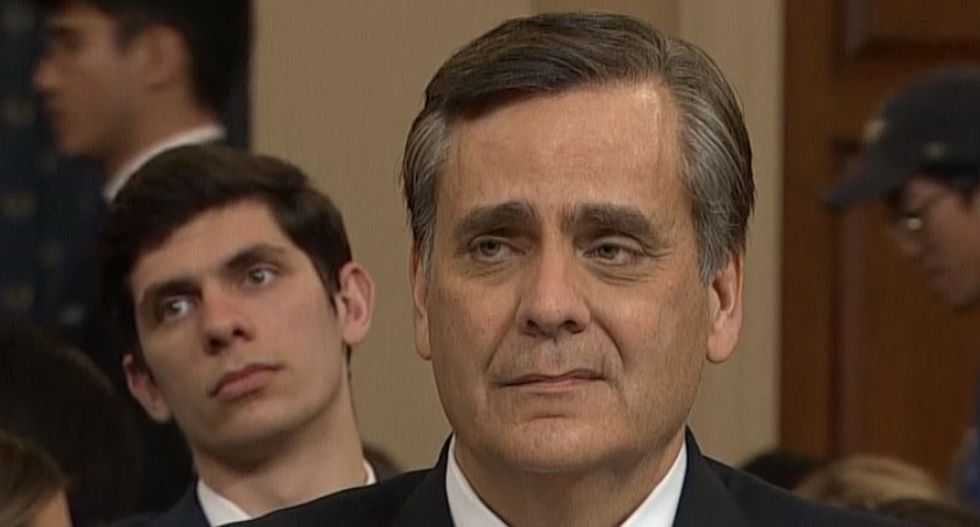 During the House Judiciary Committee hearings on impeachment Wednesday, Rep. Joe Neguse (D-CO) challenged the GOP constitutional expert witness, George Washington University law professor Jonathan Turley, who had argued Trump wasn't being given a proper chance to present his case — and got him to admit that President Donald Trump has in fact blocked several key witnesses from testifying, something previous impeached presidents did not do.

"And you're aware that President Trump has refused to allow his chief of staff or White House counsel to testify in this inquiry, correct?" said Neguse.

"Yes, but various officials did testify and they are remaining in federal employment," said Turley.

"That is correct," said Turley.

"Are you familiar with the letter issued by White House counsel Pat Cipollone on October 8, written on behalf of President Trump, in effect, instructing executive branch officials not to testify in this impeachment inquiry?"

"And am I correct that no president in the history of the republic, before President Trump, has ever issued a general order instructing executive branch officials not to testify in an impeachment inquiry?" said Neguse.

"That's where I'm not sure I can answer that affirmatively," said Turley. "President Nixon, in fact, went to court over access to information, documents, and the like, and he lost."

"Well, Professor Turley, I would just again refer you back to the history that's been recounted by each of the distinguished scholars here today, because we know, as we recount these examples, that President Nixon did, in fact, allow his chief of staff and his chief counsel to testify, and this president has not," said Neguse. "We know that President Clinton responded to the interrogatories propounded by that impeachment inquiry, and that this president has not."

"I agree with that," conceded Turley.

"At the end of the day, this Congress and this committee has an obligation to insure that the law is enforced," said Neguse.