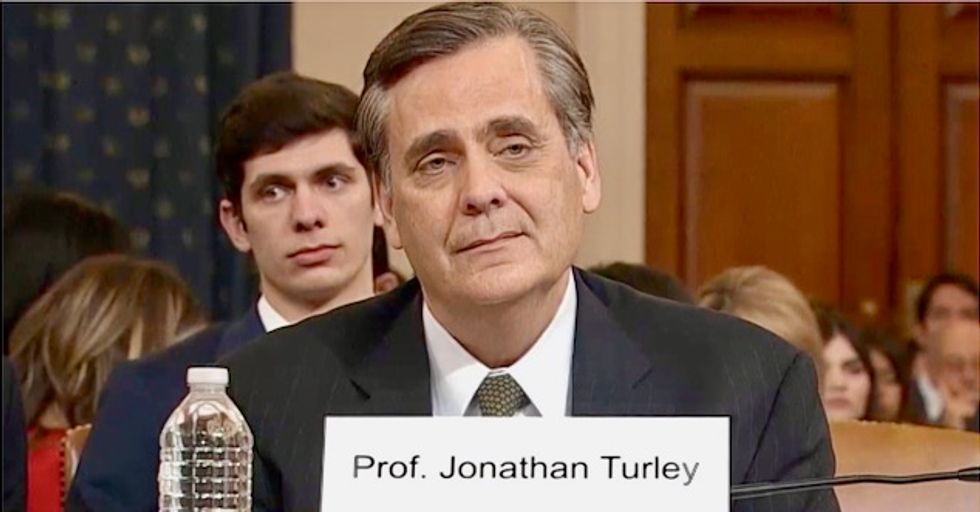 Turley has released his 53-page opening statement, which some have already observed is more than twice as long as the combined statements of the Democrats' three legal experts.

In it, he makes this statement that is getting a great deal of attention:

"I get it. You are mad. The President is mad. My Democratic friends are mad. My Republican friends are mad. My wife is mad. My kids are mad. Even my dog is mad . . . and Luna is a golden doodle and they are never mad. We are all mad and where has it taken us? Will a slipshod impeachment make us less mad or will it only give an invitation for the madness to follow in every future administration?"

Turley will argue that Trump should not be impeached, despite writing in that same statement: "The use of military aid for a quid pro quo to investigate one’s political opponent, if proven, can be an impeachable offense."

But that same Jonathan Turley had a very different position on impeaching a sitting president when that president was a Democrat. Professor Turley, in a statement written  November 9, 1998, declared that impeaching President Bill Clinton was necessary to literally protect the "existence of the government," and to prevent "contempt for law" and "anarchy."

Professor Turley literally suggested that were President Clinton not impeached, anarchy would rain down on the nation.

"Allegations of criminal acts in office by a president are perhaps the greatest threat to the perceived legitimacy of a government," Professor Turley wrote back in 1998. "When there is compelling evidence of criminal acts in the Chief Executive, an entire system of laws is undermined and demands some form corrective action."

Turley did not stop there. He continued:

In a government of laws, existence of the government will be imperiled if it fails to observe the law scrupulously. Our Government is the potent, the omnipresent teacher. For good or for ill, it teaches the whole people by its example. Crime is contagious. If the Government becomes a lawbreaker; it breeds contempt for law; it invites every man to become a law unto himself; it invites anarchy.

The allegations against President Clinton go to the very heart of the legitimacy of his office and the integrity of the political system. As an individual, a president may seek spiritual redemption in the company of friends and family. Constitutional redemption, however, is found only in the company of representatives of all three branches in the well of the Senate. It is there that legitimacy, once recklessly lost, can be regained by a president.

Clinton was impeached for lying under oath and obstruction of justice.

His actions are dwarfed by what is charged in both the Mueller report and in the just-released House Intelligence Committee impeachment report, which spans 300 pages.

Professor Turley is getting some appropriate criticism on social media.

Mr. Turley took a very sharp right turn several years ago. Some of his positions are baffling. By his logic, even N… https://t.co/QQNJ2bSSmG
— David Saliba (@David Saliba)1575473472.0