Here are 7 standout moments from the Democratic primary debate 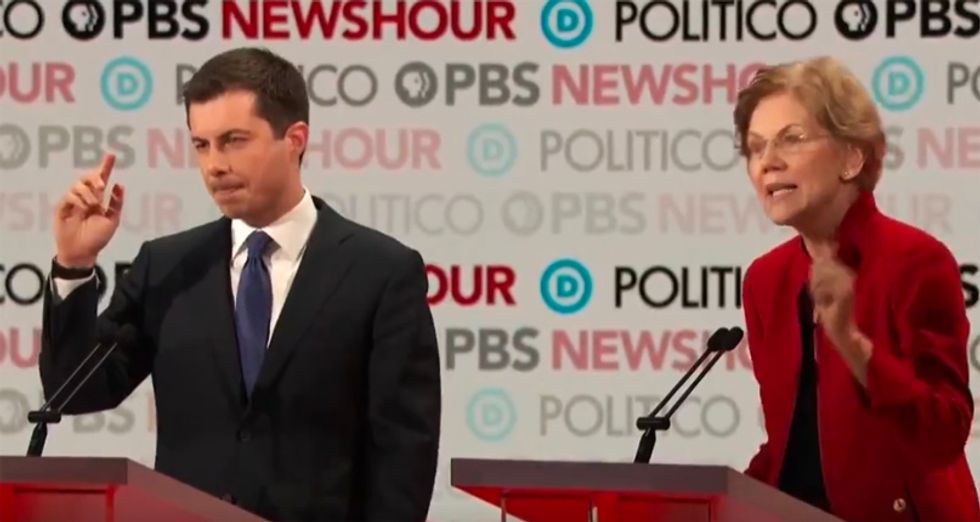 On Thursday night, the size of the Democratic presidential primary debate finally shrunk down from 10 candidates to the more manageable seven, all facing off to convince voters that they’re best suited to defeat Donald Trump in 2020.

With skillful moderation from PBS and Politico, the debate started off calm and was much more focused on foreign policy than is typical. It was a welcome change, given how central foreign policy is to a president’s powers and priorities.

By the second hour, the event became somewhat more combative with Sen. Elizabeth Warren (D-MA) and Sen. Amy Klobuchar (D-MN) facing off with Mayor Pete Buttigieg. Sen. Bernie Sanders (I-VT) and former Vice President Joe Biden later sparred over health care. Overall, though, the debate ended with calls for conciliation — and a focus on how to best defeat Trump.

Here are 7 notable moments from the debate:

1. Sen. Bernie Sanders defended the rights of Palestinians — a rarity in American politics.

He said that while he’s pro-Israel, U.S. policy cannot “just about being pro-Israel. We must be pro-Palestinian as well.” Biden said that while he would not withhold aid to Israel to extract policy concessions, a two-state solution — which seems to have no role in current U.S. policy — is necessary for any path forward in the region.

While Andrew Yang at one point downplayed the significance of racism in motivating the president’s voters, Steyer was forthright in calling out Trump’s white supremacy.

3. Warren and Buttigieg went head to head over the issue of big-money donors.

Warren called out the mayor for holding fundraisers with wealthy donors that regular Americans would be unable to attend, but Buttigieg responded by saying that she is much wealthier than he is and has previously solicited funds from rich people herself.

Sen. Elizabeth Warren: "Billionaires in wine caves should not pick the next president of the United States." Pete… https://t.co/61f0pFvvPS
— PBS NewsHour (@PBS NewsHour)1576809188.0

4. Warren gave a smart rejoinder to a question raising the fact that she’d be the oldest president ever inaugurated.

5. Multiple candidates took on directly the issue of Chinese authoritarianism and repression — where Trump is weak — and the Chinese government apparently wasn’t happy.

CNN live feed of Democratic presidential debate goes to black in Beijing. Candidates were asked about China’s human… https://t.co/qDAVKDeVgK
— Will Ripley (@Will Ripley)1576807288.0

7. Andrew Yang addressed being the only person of color on the debate stage.

Businessman Andrew Yang weighs in on being the only person of color on the stage tonight. #DemDebate https://t.co/TvRBxe3BOt
— Pod Save America (@Pod Save America)1576806780.0