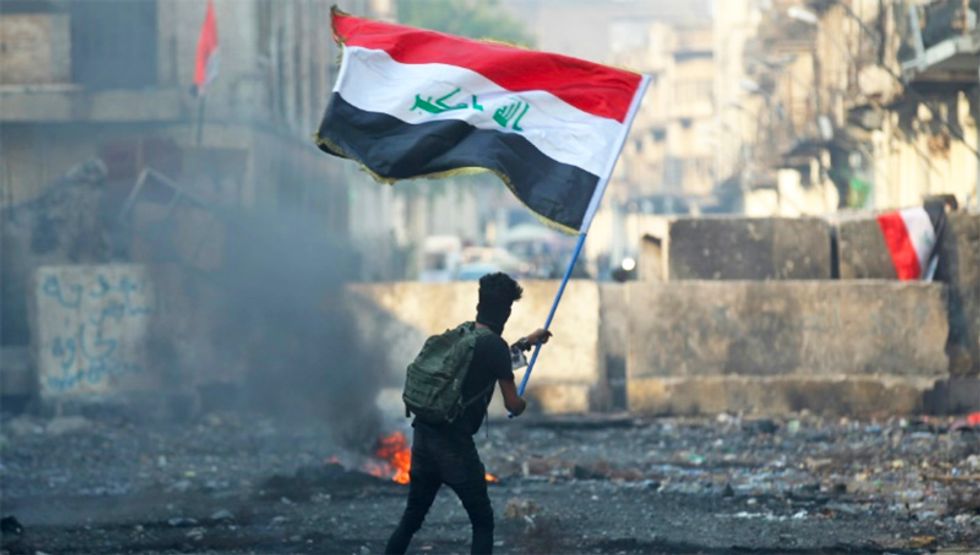 AFP / AHMAD AL-RUBAYE After a spike in deaths last week, Prime Minister Adel Abdel Mahdi said on Friday he would submit his resignation to parliament

Iraq's parliament approved the resignation of Prime Minister Adel Abdul Mahdi and his cabinet on Sunday after two months of anti-government demonstrations that have left more than 420 dead, most of them protesters, as thousands mourned the dead in nationwide marches.

Prime Minister Adel Abdul Mahdi said Friday he would submit his resignation to parliament following a spike in the death toll among protesters who accuse the country's entire ruling elite of being inept, corrupt and beholden to foreign powers.

Parliament opened its session on Sunday afternoon and within minutes had approved Abdul Mahdi's resignation, which according to Iraq's constitution renders him and the entire cabinet a "caretaker government". The speaker of parliament said he would now ask President Barham Saleh to name a new prime minister.

Just before the session began, another protester was shot dead in the capital, medical sources said.

The demonstrations spread from their epicentre in Baghdad and the mostly Shi'ite south to the northern, majority-Sunni city of Mosul, where hundreds of students dressed in black organised a mourning march for fallen activists.

The protest movement is Iraq's biggest since the US-led invasion of 2003 toppled Saddam Hussein and installed a democratic system in the oil-rich but poverty-plagued nation. The demonstrators have vented their anger at neighbouring Iran, which is seen to wield huge influence in Iraq, with protesters last week burning down an Iranian consulate.

"Abdul Mahdi should leave, so should parliament and the parties, and Iran," said a young demonstrator in Baghdad's Tahrir (Liberation) Square, the centre of the protest movement that started in early October.

In other developments, an Iraqi court sentenced a police officer to death on Sunday after convicting him of killing demonstrators, the first such sentence in the two months of deadly civil unrest. The Kut criminal court sentenced the police major to be hanged, and also jailed a police lieutenant colonel for seven years.

They were both judged guilty for their roles in the deaths of seven protesters in the southern city on November 2, judicial sources said.

In Mosul, protesters were marching in solidarity with activists elsewhere in the country.

"It's the least Mosul can give to the martyrs of Dhi Qar and Najaf," said Zahraa Ahmed, a dentistry student, naming the two provinces where most of the recent deaths took place. "The protesters are asking for their basic rights so the government should have answered from the beginning,” he added.

Previously, most Sunni-majority areas had refrained from protesting, fearing that opposing the central government would earn them the labels of being "terrorists" or supporters of Saddam Hussein.

For three years, Mosul was the heart of the Islamic State group's self-styled "caliphate", and much of it still lies in ruins today.

Another student in Mosul, Hussein Kheder, carrying an Iraqi flag, said the whole country was now on the same page politically and told AFP that "now the government needs to heed the protesters' demands".

In Salaheddin, a Sunni-majority province north of Baghdad where rallies were held for the first time, authorities had already declared on Friday three days of mourning for the victims. Additionally, eight Shi'ite-majority provinces announced a day of mourning on Sunday during which government offices would remain shut.

More than 20 people had been killed in the Shi'ite shrine city of Najaf, 40 people in the hotspot of Nasiriyah and three in the capital Baghdad in three consecutive days of violence.

On Sunday, an AFP correspondent reported calm in Nasiriyah, the birthplace of Abdul Mahdi, who came to power just a year ago based on a shaky alliance between rival parties.

He had resisted protesters' calls for him to step down over the past two months. But the crackdown turned the tide this week, as it prompted Iraq's Shi'ite spiritual leader, Grand Ayatollah Ali al-Sistani, to call on parliament to drop its support for the premier.

In quick succession, political factions indicated they would support a no-confidence motion.