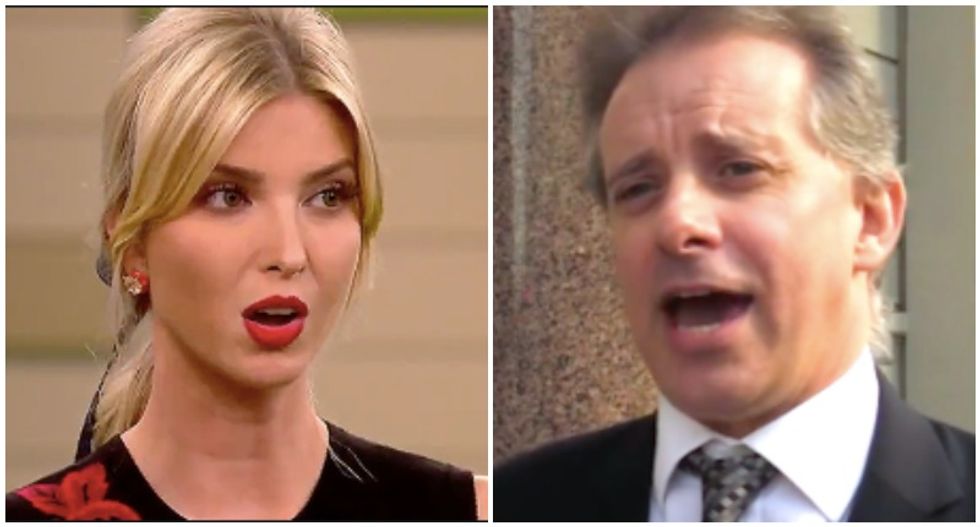 The Department of Justice’s inspector general’s report on the FBI’s Russia investigation revealed that Steele had a previously unreported “friendly” relationship with a member of the president’s family.

"He stated that if anything, he was 'favorably disposed' toward the Trump family before he began his research, because he had visited a Trump family member at Trump Tower and 'been friendly' with [the family member] for some years,” the report said. "He described their relationship as 'personal' and said that he once gifted a family tartan from Scotland to the family member.”

The family member was identified as Ivanka by ABC News. Politico and other outlets subsequently confirmed the report.

Steele, a former MI6 agent who founded the firm Orbis Business Intelligence, and Ivanka met at a 2007 dinner and “began corresponding about the possibility of future work together,” a source told ABC News. The two reportedly discussed how Steele’s firm could help the Trump Organization expand into foreign markets.

The Times of London reported Wednesday that the two specifically discussed how to find “appropriate business partners in Russia and China.”

Steele and Ivanka met while sitting together at an exclusive London club at a dinner with about 20 other people, according to the report. The dinner featured speeches from David Cameron, who would go on to be elected prime minister, and Strobe Talbott, the former president of the Brookings Institution who served in the State Department under former President Bill Clinton.

The dinner was organized by a group of businessmen to “discuss philanthropic funding of political research,” The Times reported.

Steele and Ivanka “became friends” after the dinner and discussed business opportunities in Russia and China, according to the report.

The two corresponded about meeting up near Trump Tower, according to emails viewed by ABC News, and later met at Trump Tower. The two stayed in touch via email “over the next several years,” including a 2008 exchange in which they discussed meeting at a restaurant just blocks from Trump Tower.

Less than a decade later, Steele was hired by Fusion GPS to investigate Donald Trump’s ties to Russia. Steele produced a controversial dossier, which, among other things, alleged that Trump employed a “number of prostitutes to perform a ‘golden showers’ show in front of him” at a Moscow Ritz Carlton Hotel room where the Obamas had stayed.

The inspector general’s report disputed a claim pushed by Trump that the FBI’s Russia investigation was launched based on information in the dossier, which the report said agents only obtained after kicking off the probe. But the report also noted that the dossier played a “central and essential” role in the FBI’s applications to surveil former Trump campaign adviser Carter Page, a process which inspector general Michael Horowitz severely criticized for systemic errors and omissions despite finding that the attempts to surveil him were justified.

The FBI used Steele as a source in the past but ended its relationship after learning he had spoken to journalists, according to the report. The FBI was not able to corroborate the “golden showers” episode nor some of the other claims in the dossier.

Steele told ABC News the inspector general’s report contained “numerous inaccuracies and misleading statements.” Steele said that he could not provide the FBI information about his sources, because it was “highly risky” for their safety. He further claimed that if they had been able to give interviews in a private manner, their information would be “put in a very different light.”

Former longtime Trump lawyer Michael Cohen told former special counsel Robert Mueller that President Donald Trump was still looking to expand into Russia while he was running for office. He directed Cohen to get approval from the Russian government to build a Trump Tower in Moscow despite denying so publicly, the attorney told investigators. Cohen, who pleaded guilty to lying to Congress about the project in Mueller’s investigation, later testified to the House Oversight Committee that Trump, “in his way,” told him to lie to Congress about Trump Tower Moscow.