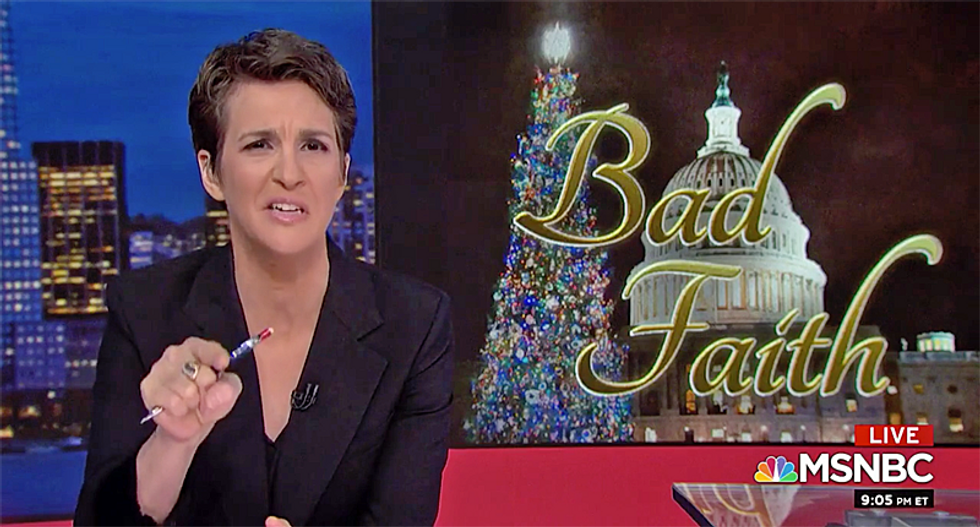 The host of "The Rachel Maddow Show" on Friday blasted "bad faith" arguments from Republicans about the impeachment inquiry into President Donald Trump.

Maddow recounted the process complaints by Republicans -- each of which has disappeared.

"After going through all of that, they now have unveiled a new objection as to why President Trump cannot actually be subject to this impeachment proceeding, a new noble stand they're taking for fairness and the American way -- they have rolled it out with our friends at the Fox News channel," Maddow said.

She played a clip of former GOP Speaker Newt Gingrich on Fox News.

"And really, on the eve of Christmas it is really sad to see the dishonesty and the partisanship that the House Democrats are displaying," Gingrich argued.

That was too much for Maddow, who reminded her viewers that then-Speaker Gingrich introduced articles of impeachment against Bill Clinton the same night he was lighting the national Christmas tree.

Maddow warned the press not to fall for "bad faith" arguments from Republicans.

"So I would caution my friends in the media and those of us responsible for sort of tracking this on behalf of the media in this country, that it's not necessarily worth continuing to follow each bad faith objection after all the previous bad faith objections have been shown to be in bad faith, right? I mean, to a certain extent after somebody says this is something they really care about, it's then revealed to something they actually can't possibly care about, you should be cautious the next time they try to sell you that same soft soap," she explained.