Not dead last, but close to it. 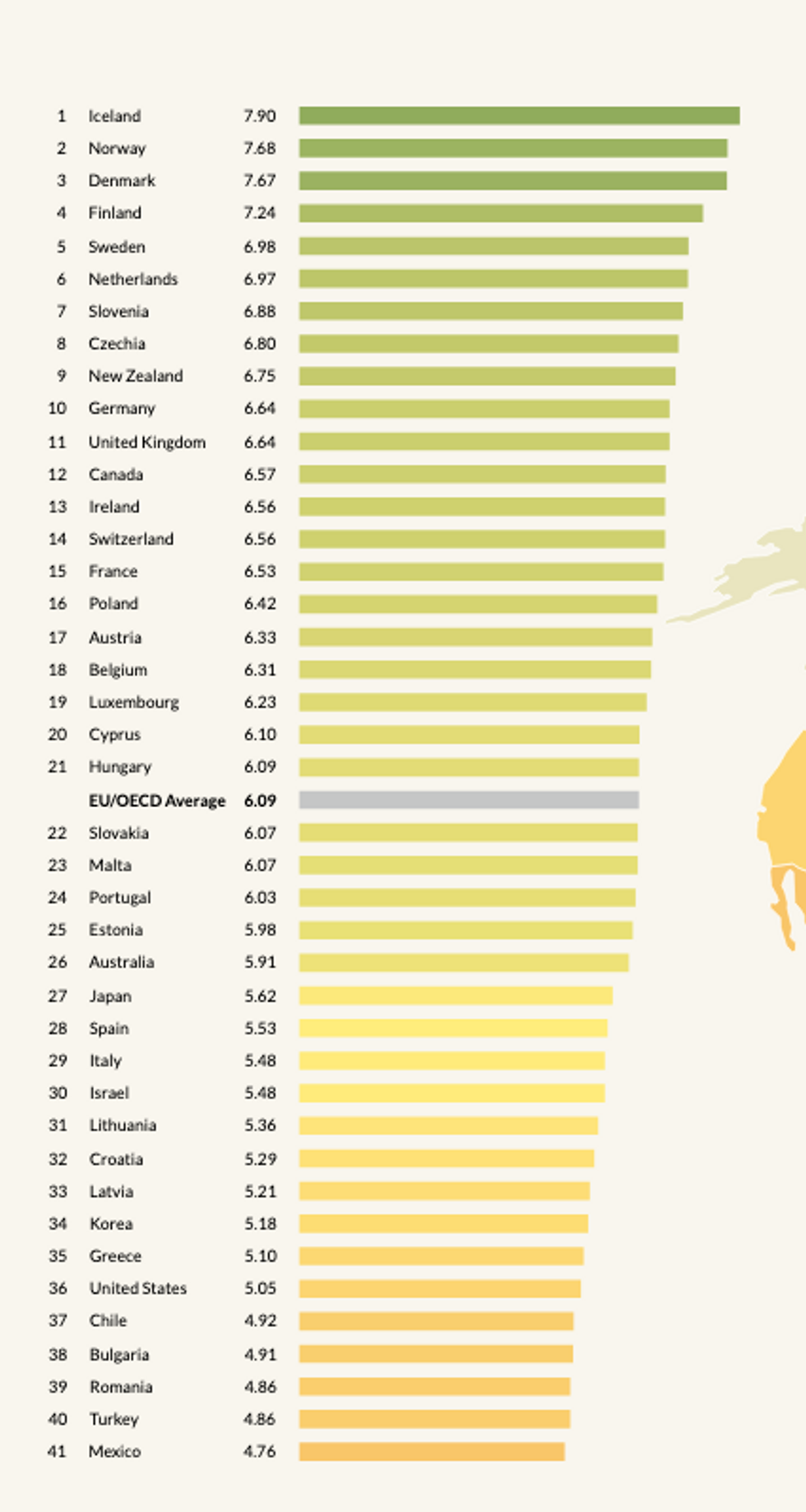 That's where the United States came out in a new survey of the world's 41 highly-developed nations measuring access to social justice and the opportunities they afford their respective citizens and residents.

The Social Justice Index (SJI), detailed in a 274-page report (pdf) and put out by the Bertelsmann Stiftung foundation in Germany, ranks the more than three dozen European Union and OECD nations based on six key social justice dynamics: poverty, education, the labor market, intergenerational justice, health, and social inclusion and nondiscrimination.

While the group said "the picture is rather bleak across the board," it is the Nordic countries which generally rank highest—with Iceland, Norway, Denmark, Finland, and Sweden the top five. On the other end, the U.S. came in near the very bottom, ranking 36 out of 41 nations overall, only coming out ahead of Chile, Bulgaria, Romania, Turkey, and Mexico.

Especially on the issue of poverty, the foundation said in a statement, the U.S. under President Donald Trump "falters considerably" compared to other developed nations. According to the group:

The risk of poverty in the country remains high at 17.8% – only Israel exceeds this rate. Children and youth (poverty risk of 21%) as well as senior citizens (23.1%) are particularly at risk of poverty. There are no improvements to be expected on the horizon; instead, the recent cuts in social spending taken by the Trump administration raise fears that poverty will increase rather than decrease.

Setbacks have also been registered in the area of intergenerational justice, where the United States numbers among the five worst performers. This is in part due to the country’s weak environmental policies: with greenhouse gas emissions reaching 19.86 tons per capita, the United States is one of the biggest polluters in the sample (rank 40). The country’s weak efforts to leave behind an intact environment are also reflected in its failure to expand renewable energies, which account for a mere 8.7% of the country’s total energy generation. In addition, the government’s high budget deficit threatens to place a heavy financial burden on young and future generations. The per capita debt burden bearing down on every child in the United States is already exceedingly high at $351,810 (rank 38).

The index further explains that the U.S. "fails miserably" when it comes to placing value on the interests of both older and younger generations when it comes to its domestic policies. It also cites Trump's horrific environmental record as an area of particular concern.

"The Trump administration has been a rapidly escalating disaster for environmental policy," said one expert quoted in the report. "Although  some  of  the  more  liberal  states  will  attempt  to  continue  reducing carbon emissions, no national action can be expected during Trump's presidency. Indeed, Trump has promised to rejuvenate the coal-mining industry, an economic absurdity."