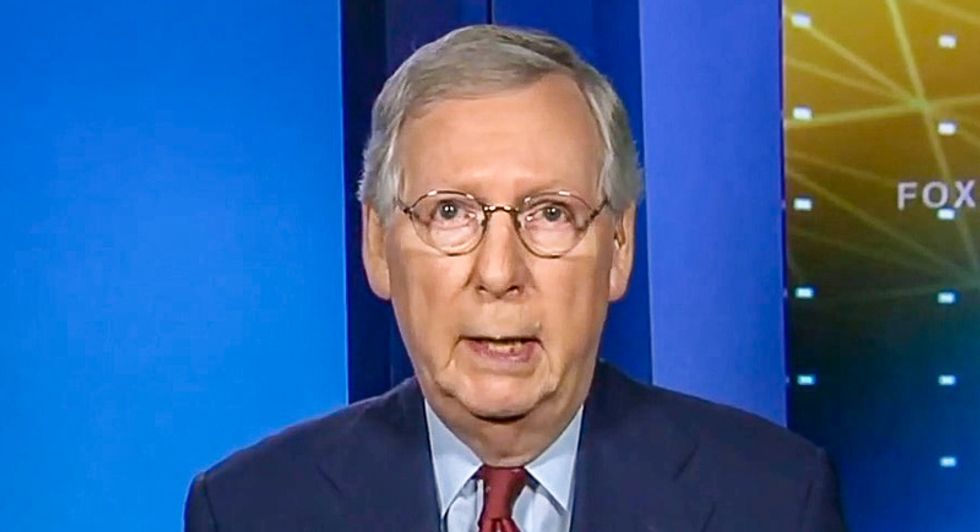 MSNBC host Chris Hayes argued on Thursday that Senate Majority Leader Mitch McConnell made a “big tactical error” by admitting on Fox News that he was in lockstep with President Donald Trump’s defense team as the coming impeachment trial looms.

In light of Alaska Republican Sen. Lisa Murkowski’s criticism of McConnell’s claims of a complete alliance with the White House as the Senate takes over impeachment is was disturbing, and she said it might confuse voters, Hayes said the leader’s blunder has become clear.

McConnell last week said explicitly to Fox News host Sean Hannity that, heading into the trial, “there will be no difference between the president’s position and our position as to how to handle this.”

And the problem for McConnell is that, unlike in many other situations, the majority leader has no ability to shut impeachment down unilaterally. If four Republican senators defect from his effort to hold a sham trial, they can join with the Democrats to ensure a thorough process. While it’s unclear how many Republicans will be willing to break with McConnell, Murkowski is one of the most plausible candidates to dissent from the GOP line, along with Utah Sen. Mitt Romney, Maine Sen. Susan Collins, and Colorado Sen. Cory Gardner. (It’s still exceedingly unlikely, though, that there will be nearly enough defections to get the 67 votes needed to remove Trump from office.)

By so straightforwardly admitting that he’s not even trying to appear impartial in the trial, McConnell has made it more difficult for people like Murkowski, who prides herself on independence, to dutifully follow his lead.

“Her stance represents a crack, a real crack, publicly, in McConnell’s efforts to forgo a real trial,” Hayes said. “And it’s a sign that McConnell’s decision to go on Trump TV and declare he was coordinating with the White House was a big tactical error.”

One interesting question Hayes didn’t really address, though, is why McConnell — typically a skilled political operator — would make such a blunder. McConnell’s up for re-election in 2020, so signaling to his voter base, which loves Trump, that he’s on the president’s side is, of course, important to him. He also seemed particularly worried that he might get blowback from voters, Trump, and right-wing media for not completely shutting the trial down or refusing to take it up, as some have called for; he’s trying to innoculate against these criticisms. In other words, he’s trying to shore up his far-right flank — but in doing so, he risks spooking Murkowski, Romney, and their ilk who he so desperately needs.