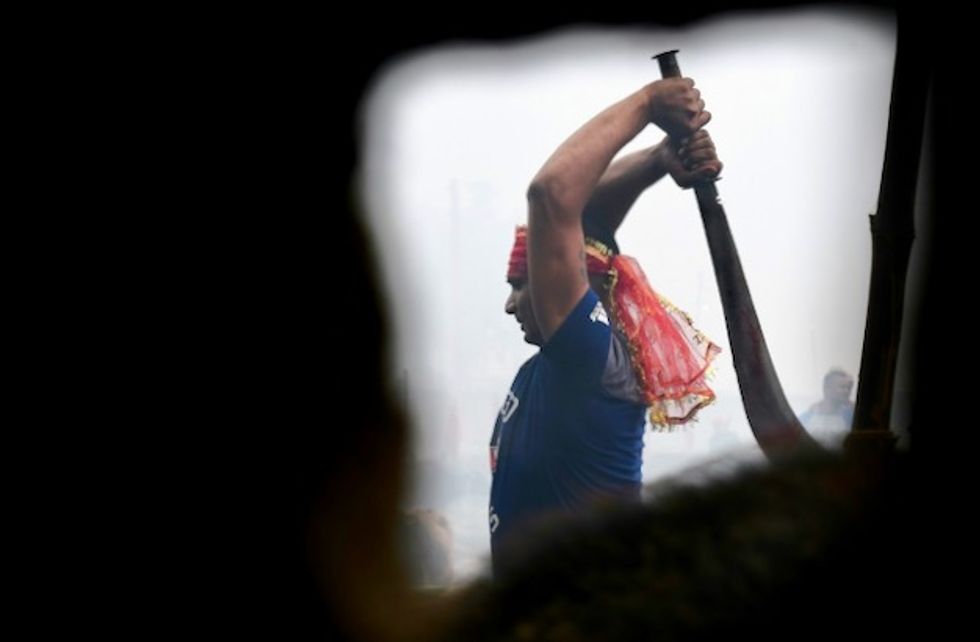 The stench of raw meat hung in the air and pools of blood dotted the muddy ground on Tuesday as what is thought to be the world's biggest animal sacrifice swung into action in a remote area of Nepal.

Efforts from activists and officials were expected to cut the death toll from the 200,000 butchered at the last Gadhimai Festival five years ago, but thousands of creatures were still set to be killed over the two days.

The event in honour of a Hindu goddess kicked off in the early hours amid tight security, with the ceremonial slaughter of a goat, rat, chicken, pig and a pigeon. A local shaman then offered blood from five points of his body.

Some 200 butchers with sharpened swords and knives then walked into a walled arena bigger than a football field that held several thousand buffalo as excited pilgrims climbed trees and walls to catch a glimpse.

"We had tried not to support it but people have faith in the tradition and have come here with their offerings," Birendra Prasad Yadav from the festival organising committee told AFP.

Thousands of goats were also bound for sacrifice -- mostly by having their throats slit -- as well as pigs and even some rats. The pilgrims could either take the remains to cook or leave them for organisers to bury.

AFP / Prakash MATHEMA An estimated 200,000 animals ranging from goats to rats were butchered during the last two-day Gadhimai Festival in 2014

Thousands of worshippers from Nepal and neighbouring India have spent days sleeping out in the open and offering prayers ahead of the event in Bariyarpur village, close to the Indian border.

"I believe in the goddess. My mother had asked her for the good health of my son," one of them, Rajesh Kumar Das, 30, told AFP, holding a goat in his hand.

Some 2,000 police personnel were patrolling the village and the field where sacrifices were taking place to control crowds gathered to watch.

According to legend, the first sacrifices in Bariyarpur were conducted several centuries ago when goddess Gadhimai appeared to a prisoner in a dream and told him to offer blood and establish her temple.

When he awoke, his shackles had fallen open and he was able to leave the prison and build the temple, where he sacrificed animals to give thanks, so the legend goes.

Indian border authorities and volunteers have in recent days seized scores of animals being brought across the frontier by unlicensed traders and pilgrims.

AFP / PRAKASH MATHEMA The first sacrifices in Bariyarpur were conducted several centuries ago, according to legend

While this has failed to stop the flow, officials and animal rights groups say such efforts combined with awareness campaigns have helped decrease the bloodshed.

"The temple committee seems to be shaken by the campaigns as well as the government. The number of animals sacrificed are gradually decreasing," said Amruta Ubale of Animal Equality India.

Local officials have also been running programmes to raise public awareness against the sacrifices and asked devotees to offer money instead of animals, district official Phanindra Mani Pokharel said.

Many were hopeful the centuries-old tradition would end after the temple authorities announced a ban in 2015 and Nepal's supreme court directed the government to discourage the bloodshed a year later.

But animal rights activists say both government agencies as well as temple committees have failed to implement these rulings.

"It is now time for the Nepal government to step up and introduce a ban in law on animal sacrifice so that this is the last time we witness such horrors at Gadhimai," said Tanuja Basnet, director of Nepal's Humane Society International.

Among the bleating goats in the temple area were some devotees who opted not to kill any animals but to free pigeons, like 20-year-old Rabindra Kumar Yadav who came to thank the goddess for his health.

"We didn't sacrifice an animal, we worshipped the goddess with a pair of pigeons instead," he said, before the lucky birds flapped away to safety.