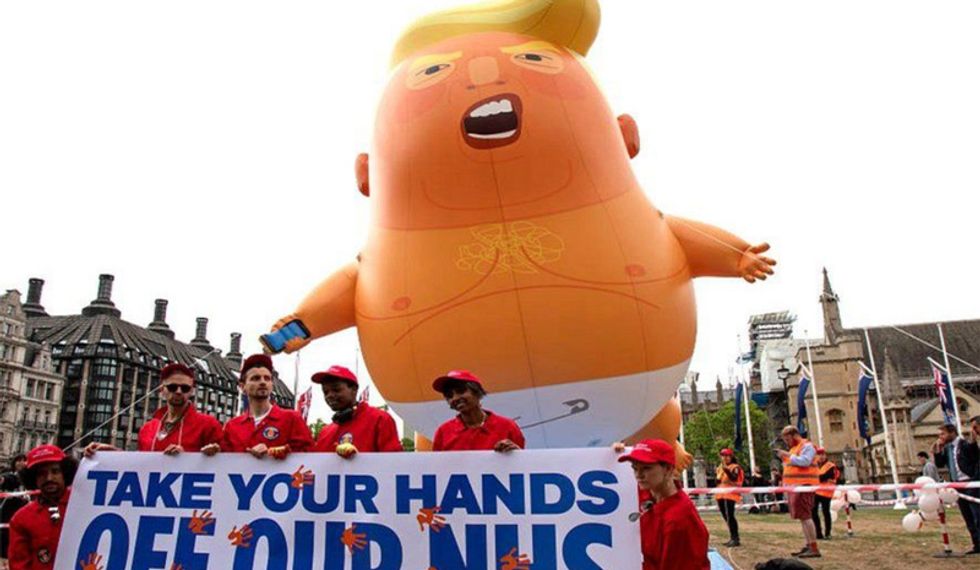 Nurses and doctors from the United Kingdom's National Health Service are planning to lead a protest against U.S. President Donald Trump next week amid mounting concerns about potential privatization of the U.K.'s decades-old public healthcare system.

The Stop Trump Coalition—which helped organize massive protests against the U.S. president when he visited the U.K. in July 2018—said in a statement Friday that "the health workers' bloc will tell Trump 'hands off our NHS,' as concerns intensify about a trade deal letting U.S. firms muscle in on the health service."

Trump is scheduled to arrived in the U.K. late Monday, ahead of a two-day summit to mark the 70th anniversary of the North Atlantic Treaty Organization (NATO). Demonstrators plan to gather at Trafalgar Square Tuesday evening, then march toward Buckingham Palace, where Trump is set to attend a banquet with the Queen.

"This week we discovered just how great a threat Donald Trump is to our NHS," explained Nick Dearden of trade campaign group Global Justice Now, who is set to speak at the upcoming protest. "That's why Tuesday's demonstration will be led by nurses and doctors—to symbolize the millions of people who will stand up for our health service against a U.S. president who simply represents the biggest, greediest corporate interests in the world."

"We will make clear that Britain is not for sale," Dearden added. U.K. Prime Minister and Conservative Party Leader Boris Johnson "might be happy to be bullied by Trump, but on Tuesday we will make clear to the world that we are not."

On Wednesday, as Common Dreams reported, Labour Party Leader Jeremy Corbyn unveiled over 450 pages of leaked government documents on U.S.-U.K. trade negotiations between July 2017 and July 2019—which Corbyn called "evidence that under Boris Johnson the NHS is on the table and will be up for sale" in talks with Trump.

REVEALED: the truth about the Conservatives, Donald Trump and our NHS. https://t.co/AvCxXdVnGM
— Jeremy Corbyn (@Jeremy Corbyn)1574852769.0

Johnson and other Tories have repeatedly denied such charges, both prior to and following Corbyn's press conference Wednesday. Johnson told LBC radio Friday that "under no circumstances will this government or any Conservative government do anything to put the NHS up for negotiation in trade talks, or privatizing, anything like that."

"Were the United States or any other country to insist on that as a condition of talks, we would simply walk out," added the prime minister. Johnson—whom Trump has previously supported and showered with praise—also encouraged the U.S. president to stay out of the U.K.'s approaching election, which will be held on Dec. 12.

New research commissioned by GMB, the union for NHS workers, and released Friday cast doubt on Tory politicians' promises to safeguard the nation's government-run healthcare system. Conservative Health Secretary Matt Hancock, for example, claimed in January that "there is no privatization of the NHS on my watch."

The Guardian reported that "the value of contracts given to non-NHS providers, mainly profit-driven firms but also including some social enterprises, has soared by 89% since 2015, from £1.9 billion to £3.6 billion a year."

GMB national secretary Rehana Azam said in a statement Friday that "these shocking figures expose the extent to which our NHS is increasingly falling into private hands."

"Outsourcing is bad news for patients and NHS staff," Azam added. "Time and time again, we have seen private providers fail to deliver while our members' terms and conditions and the NHS national agreement have been undermined."

Azam insisted that "it is safer and in the long-run it is better value for services such as care, patient transfers, and facilities management to be brought back in house."

"NHS services should be provided in the public interest, not for private profit," she concluded. "Urgent action is needed to end outsourcing in the NHS, and we urge NHS workers and everyone who relies on the service to make that case to their local candidates during the election."