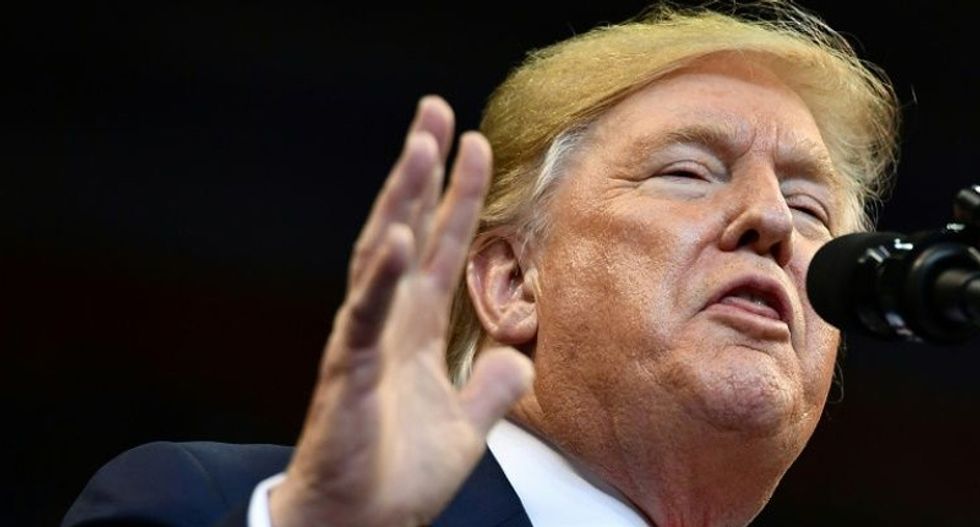 In a speech to the right-wing Turning Points USA conference in Florida on Saturday, President Donald Trump launched into an incoherent diatribe against wind power in which he said in the same breath that he "never understood wind" and has studied windmills "better than anybody," pointed out for no apparent reason that the earth is "tiny" compared to the rest of the universe, and claimed there are "bird graveyards" under wind turbines.

"I never understood wind. You know, I know windmills very much," Trump told the audience of mostly high school and college students. "It's very expensive. They're made in China and Germany mostly—very few made here, almost none. But they're manufactured tremendous, if you're into this, tremendous fumes, gases are spewing into the atmosphere."

"You know we have a world, right?" the president added. "So the world is tiny compared to the universe. So tremendous, tremendous amount of fumes and everything. You talk about the carbon footprint. Fumes are spewing into the air, right? Spewing. Whether its in China, Germany, its going into the air. Our air, their air, everything. Right?"

Trump went on to rant about the threat wind turbines pose to birds, without noting that fossil fuel plants are far more deadly.

"They're noisy. They kill the birds," Trump said. "You want to see a bird graveyard? You just go. Take a look. A bird graveyard. Go under a windmill someday. You'll see more birds than you've ever seen ever in your life."

Activist Matt Ortega tweeted in response to the president's speech that "Trump says he doesn't understand wind then proved it."

Trump's remarks were so bizarre that environmentalists and other observers had a difficult time critiquing them, aside from noting that they were completely "unhinged."Vox's David Roberts wrote that while was no decipherable argument in Trump's speech, that won't stop mainstream media outlets from presenting the president's remarks as a "coherent point about wind power."

Earther's Matt Novak wrote Monday that Trump's speech would "be almost funny if it wasn't coming from the most powerful person in the world—a man who's setting energy policy while climate change makes the world less inhabitable for all of us."

"All in all, the speech was suitably unhinged for a president who has mostly lost touch with reality," Novak added. "But President Trump has learned that he can say whatever he wants now and his supporters will stick with him."

Gov. Ron DeSantis will resist testifying in Andrew Warren’s legal challenge to the governor’s order suspending him as the elected state attorney for Hillsborough County, according to a pretrial report issued in the case.


U.S. District Judge Robert Hinkle released the report, a summary of where the case stands, on Tuesday. It sets deadlines for filing motions and completing depositions in the lawsuit but Hinkle hasn’t yet set a trial date.

The video was released as part of the sentencing of 72-year-old Howard Richardson, a Pennsylvania man who got 46 months in prison Aug. 26 for attacking law enforcement officers with a Trump flag and joining a mob that used a large Trump banner as a battering ram during the Jan. 6 attack, reported NBC News.