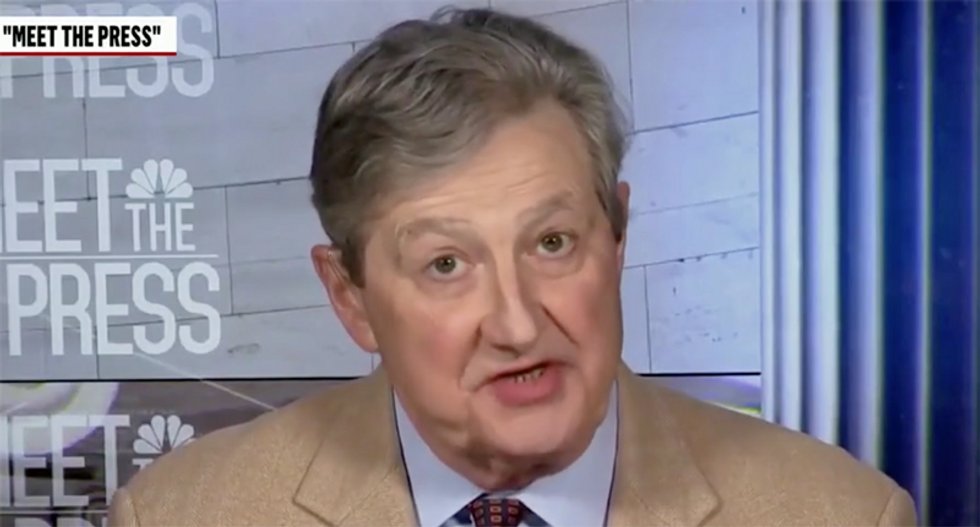 Sen. John Kennedy (R-LA) was ripped on MSNBC for promulgating disinformation from Russian military intelligence by repeating the conspiracy theory that it was Ukraine -- not Russia -- that intervened in the 2016 presidential election.

MSNBC anchor Nicolle Wallace played a clip of Kennedy being interviewed by Chuck Todd on "Meet the Press."

"For the second Sunday in a row -- in defiance of facts, intelligence assessments, reason -- Sen. John Kennedy was out peddling Vladimir Putin's talking points and demonstrating his utter capitulation to Putin and Donald Trump," Wallace noted.

For analysis, Wallace interviewed Charlies Sykes, the founder and editor-at-large of conservative news and opinion website The Bulwark.

"We have been watching these interviews, and we try not to amplify Russian propaganda here, but I keep airing that because I have not heard an explanation as to why," Wallace said.

"I wish I had one. I mean, this is the guy who has a degree from Oxford, he's not an unintelligent man, yet he comes off as an addled Russian asset on television," Sykes replied.

"Is this the price now to be paid for currying favor in Trump world? Did he have to go full Devin Nunes (R-CA) on all of this?" Sykes wondered.

"And I think this is part of the dilemma dealing with impeachment, the willingness of people who ought to know better to pedal this kind of just flat-out B.S. It's just this torrent, this hurricane of misinformation from people who you would hope would keep a calmer head about them, a calmer demeanor," he added.