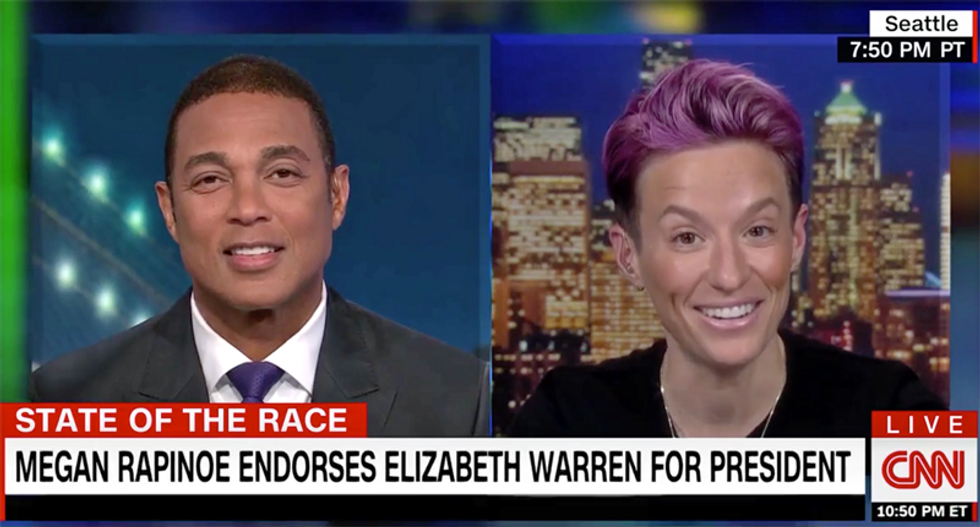 "Elizabeth Warren picking up a big endorsement today from Megan Rapinoe, the soccer star and social activist who was named Sports Illustrated's 2019 'Person of the Year' earlier this week," Lemon reported.

Lemon played a clip of Rapinoe talking to Warren that was posted earlier in the day on Twitter.

I truly believe the best things in life are a result of being bold and being real. I’m proud to endorse Elizabeth W… https://t.co/ZAqiJiy9e3
— Megan Rapinoe (@Megan Rapinoe) 1576257551.0

Lemon said, "I'm sure every candidate would love to have had your endorsement, why are you team Warren?

"I mean I have been tracking the whole thing obviously for a while, but honestly I think we need -- as I said in, the video -- I think we need really big, bold, brave progressive policy," she explained.

She also offered her thoughts on President Donald Trump.

"So for me, I just feel like we cannot focus too much on Trump, obviously he's a crazy force happening, but ... we need to show people there is another path forward," Rapinoe said.

"He should be impeached. It's clear he uses the office to enrich himself and his family and the people around him, he abuses power," she added. "For me it's impeachment for sure."