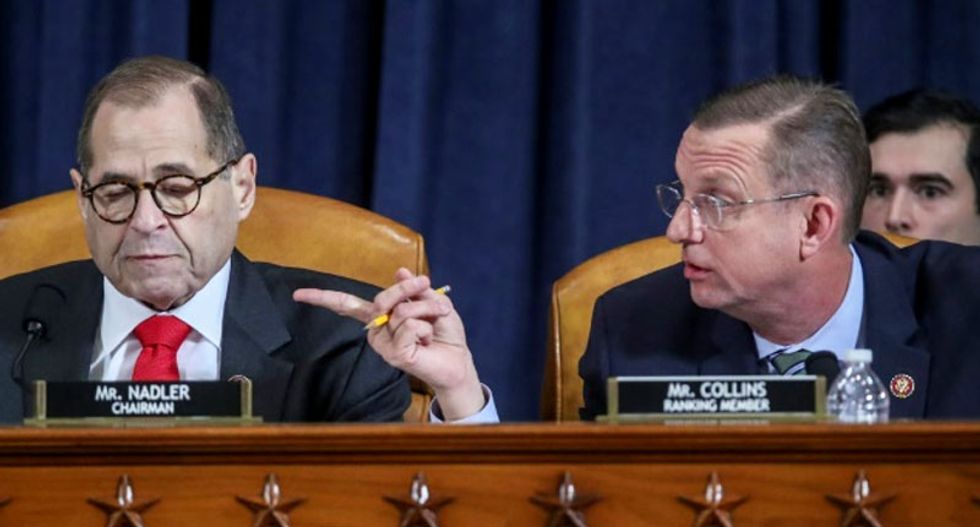 Democrats laid out the case for the impeachment of President Donald Trump Monday as they prepared to issue formal charges against the US leader.

Four months after an anonymous whistleblower sparked the investigation of Trump for seeking illicit political favors from Ukraine, Democrats said there was clear evidence that he had committed bribery, abused his power, and obstructed the investigation.

"President Trump put himself before country. These facts are not in dispute," Judiciary Committee Chairman Jerry Nadler said.

Facing an almost certain vote in the coming weeks to make Trump the third president impeached and placed on trial, Doug Collins, the senior Republican on the committee, countered that the effort was a simply "a good PR move" for Democrats ahead of next year's national elections.

"It's all political," Collins said, dismissing the allegations.

"This is all about a clock and a calendar."

It was not clear whether Trump was watching the proceedings that could cast a dark stain on his presidency.

"Witch Hunt," he tweeted as the hearing got under way.

"The Do Nothing Democrats are a disgrace!"

Tempers flared as Republicans tried to derail the hearing at its opening with procedural moves, and a lone protestor was ejected after shouting in the president's defense.

"We voted for Donald Trump and Americans are sick of this impeachment... Trump is innocent," he shouted.

Trump is accused of abusing his powers by pressuring Ukraine to announce an investigation into former vice president Joe Biden, his potential challenger in the 2020 election.

Trump also pressed Kiev to further investigate a widely-dismissed allegation that the Ukraine government helped Democrats in the 2016 election.

Barry Berke, an attorney for the Democrats, said there was "significant proof" of wrongdoing as he laid out the evidence collected by the House Intelligence Committee in a 10-week investigation.

"In the scheme to pressure Ukraine... the person at the center of that scheme was President Donald Trump," he told the hearing.

Berke played videos of testimony by top US diplomats involved with Ukraine supporting the charges, and a video of Trump claiming he has "the right to do whatever I want as president."

"He put his political reelection interests over the nation's national security and the integrity of its elections."

"Of course we have an election coming up," he said, in a nod to Republican criticisms.

Republican attorney Stephen Castor, tasked with disputing the evidence, said Democrats were simply attacking Trump for policies they do not agree with.

"Democrats are obsessed with impeaching the president," he said.

He called the key evidence from the transcript of a July 25 phone call between Trump and Ukraine President Volodymyr Zelensky "baloney."

In that call, Trump tells Zelensky he wanted "a favor," including an investigation of Biden and the 2016 conspiracy theory.

He also argued that Democrats needed to take more time to accumulate evidence and build their case.

Democrats rejected that argument, noting Trump has blocked his top advisors from testifying and refused to hand over White House records.

Democrats appeared determined to push through to a full House vote on formal charges -- articles of impeachment -- before the end of the year.

That could see Trump stand trial in the Senate in January, which could last several weeks.

Given the solid Republican majority in the Senate and the high threshold to convict him, two-thirds of the 100 senators, it is almost certain that he will be acquitted.