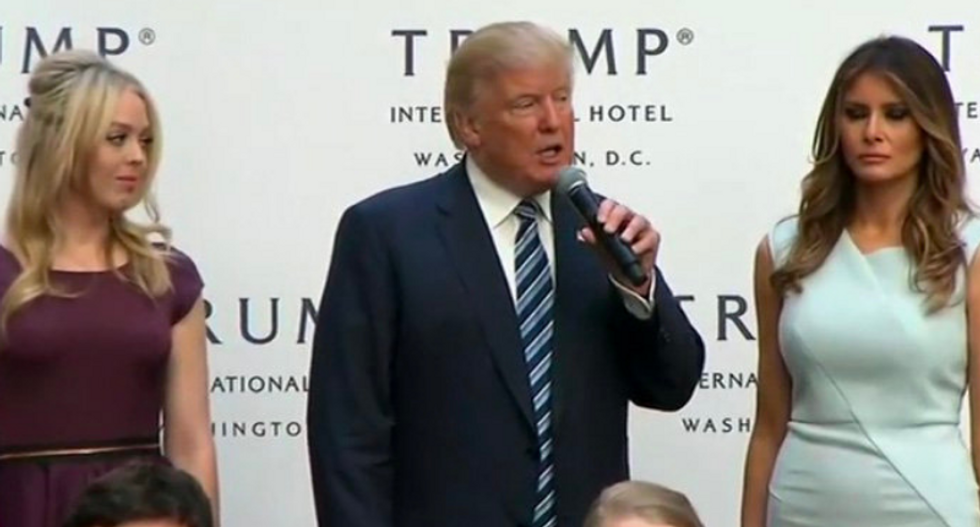 President Donald Trump has spent the better part of three years patronizing his own resorts, clubs, and golf courses. While each time he visits, he scores free advertising for himself; it turns out the best business decision is to take Trump out entirely.

The New York Times wrote Wednesday that the biggest cash driver for the president, his Doral resort in Maimi. But the resort is "emblematic of the financial pressure on Mr. Trump since he won the White House three years ago." The highest-profile properties are now part of a partisan war, and it's reduced the occupancy as a result.

At the same time, Trump is facing multiple lawsuits for violating constitutional emoluments regulations that were set to prevent foreign power-players from having financial influence over the president of the United States.

In Midtown Manhattan, however, a partially owned Trump building doesn't have any of the Trump Organization brandings on it. No protesters stand outside, and he doesn't promote it on Twitter.

"Revenues at office towers on Sixth Avenue in Midtown, on Wall Street in downtown Manhattan and at a third building in San Francisco — cities that are centers of political opposition to the president — have each jumped during Mr. Trump’s tenure in the White House, outperforming the family’s much better-recognized assets like Trump Tower on Fifth Avenue in New York, financial filings show," wrote The Times.

Hotels in New York, Panama, and Toronto have all removed the Trump name from the properties. They've increased the rent for office and commercial properties, giving the president's business a much-needed boost. Meanwhile, places like Doral are struggling.

“Our office buildings are killing it,” Eric Trump told The Times. “It is under-appreciated.”

The family has been able to maintain revenues over the past years despite declines at Trump-branded hotels in Miami and Chicago.

"For this report, The Times analyzed five years of Mr. Trump’s personal financial disclosure statements, which he first filed as a candidate and then as president. His candidate reports covered periods longer than a calendar year, so The Times adjusted the figures for comparison," the report said. "Additionally, The Times obtained loan data and other financial reports that offered a fuller picture of the performance of Mr. Trump’s commercial real estate portfolio, and loan data on Trump Organization properties."

"Trump Organization had at least $572 million in revenue in 2018, about even with 2017, The Times found. Revenue remained stable because commercial real estate added $17 million while hotels and branding deals fell off by about the same amount."