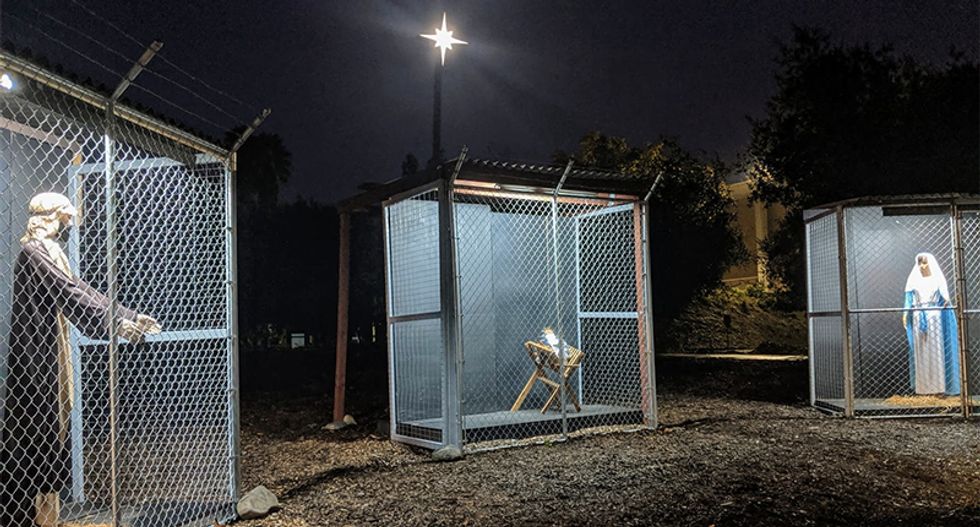 MAGA supporters are losing their minds after a photo of the Nativity scene at Claremont United Methodist Church was posted to Facebook.

The scene depicts Mary, Joseph, and the baby Jesus separated and put in their own cages, a reference to the families separated at the U.S.-Mexico border. Inside the church, the family is shown as reunited.

Senior minister Karen Clark Ristine shared the image on Facebook with the message hoping that everyone in the United States could see the photo and read the story for Christmas.

"The theological statement posted with the nativity: In a time in our country when refugee families seek asylum at our borders and are unwillingly separated from one another, we consider the most well-known refugee family in the world," she wrote. "Jesus, Mary, and Joseph, the Holy Family. Shortly after the birth of Jesus, Joseph and Mary were forced to flee with their young son from Nazareth to Egypt to escape King Herod, a tyrant. They feared persecution and death."

She went on to ask what would likely happen to the Holy family if they sought refuge in the United States today.

"Imagine Joseph and Mary separated at the border and Jesus no older than two taken from his mother and placed behind the fences of a Border Patrol detention center as more than 5,500 children have been the past three years," she continued. "Jesus grew up to teach us kindness and mercy and a radical welcome of all people."

She cited Matthew 25:35, which quotes Jesus expressing his gratitude for those who fed him when he was hungry and welcomed him in, even though he was a stranger. It's not something generally upheld by Evangelical Christians supporting President Donald Trump.

"In the Claremont United Methodist Church nativity scene this Christmas, the Holy Family takes the place of the thousands of nameless families separated at our borders," said the senior minister.

Comments on the post have taken a turn for the ugly, with those who disagree with the depiction attacking the church, the minister, conspiracy theories, and more.

"Imagine taking money you could have spent helping the indigent and spending it on barbed wire and cages to virtue signal," commented Victor Hamby.

The church's website gives details about the church's work with asylum seekers and the $10,000 they recently raised for Justice For Our Neighbors, a group that gives free legal counsel for detained and separated children.

"Joseph, Mary, and Jesus were not refugees. Bethlehem was their home town. That is a despicable nativity," proclaimed Jared Stanley. Jesus was actually Galilean from Nazareth, which is why he's generally referred to as Jesus from Nazareth.