Who is the audience for the Judiciary Committee’s impeachment hearing? 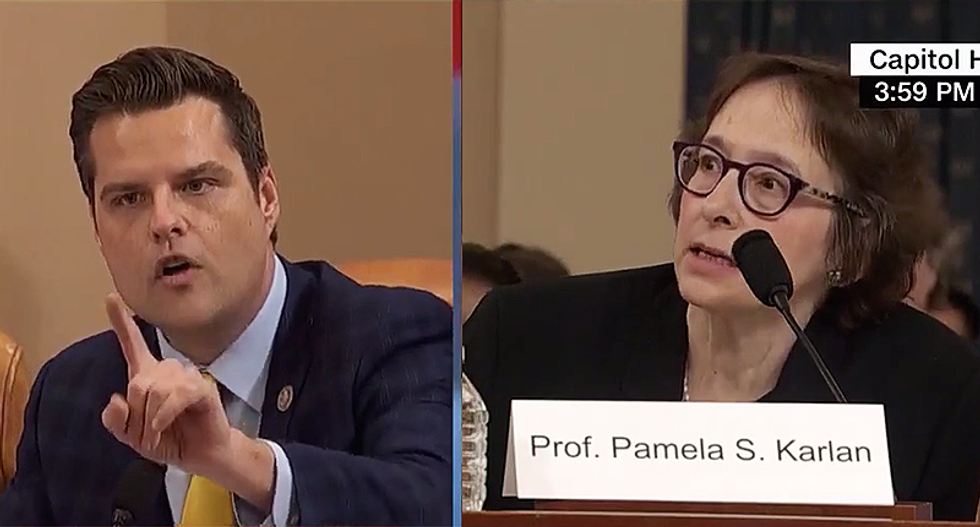 What is the purpose and who is the audience for Wednesday’s Judiciary Committee Hearing? The Democrats must do better, for all our sakes.

I have long expressed my exasperation with the timid way in which the House Democratic leadership has only reluctantly moved toward impeachment, even in the face of the damning Mueller Report, and then has proceeded in the most narrow and legalistic way imaginable.

Trump is a very dangerous President, and it is imperative that he be called to account and ultimate removed for his abuses of office. The current crisis could be an opportunity for the Democrats to do this in a way that is legally and politically empowering. But the Democrats seem intent, yet again, on squandering this opportunity with their legalistic narrowness.

While Jerrold Nadler is surely no Adam Schiff, he performed decently, and committee Democrats seem committed to carefully drafting impeachment charges based on the serious and factual information about Ukraine disclosed by the Schiff Committee.

James Madison would be proud. James Wilson too. And Gouveneur Morris. (They would not be proud of the continued sycophancy and obstruction of the Republicans).

But those guys were lawyers, not ordinary citizens. And they died two centuries ago.

What are the Democrats actually doing now? What is the point of this opening hearing, and how does it relate to what has come before and what will follow? Most importantly, who are they trying to convince?

Answers to these questions are not clear, and Nadler’s brief press statement after the hearings did little to clarify. And the process the Democrats organized in the Judiciary Committee is utterly tone deaf to questions of rhetoric and public relations.

The Democrats called three first-rate legal scholars as witnesses. All three performed admirably. One, Pamela S. Karlan, performed brilliantly (“The President can name his son Baron. But he can’t make him a baron!”). But they spent most of their time delivering learned discourses about the original intentions of the framers of the Constitution and commenting in detail on the facts of the Ukrainian case already disclosed by the televised House Intelligence Committee hearings and subsequent Schiff Report. Everything they said is true. And if they were trying to impress Ari Melber and other liberal legal commentators, then their appearance was a huge success. But the witnesses basically seem like what they are—three really smart liberal democrats, and Democrats, who think, as I do, that Trump ought to be impeached. They didn’t add anything to what is known, and they lacked the charisma or the gravitas to move anyone who might be paying attention. As a result, their reason for being there was less than clear.

The Republicans, on the other hand, were brilliantly cynical, and cynically brilliant. They called as their witness another legal scholar, Jonathan Turley, who opened his remarks by declaring that he is a Democrat who voted for Hillary, has serious problems with Trump, and thinks a more sustained inquiry might be legitimate, but has problems with this inquiry.

Turley’s performance was disingenuous and at times even tendentious (as in his suggestion that Andrew Johnson was a poor man being persecuted by fanatical Radical Republicans). His designated role was to obstruct, and he played his part well. Barring some truly Orwellian developments, history will not be kind to him.

But he was nonetheless rhetorically compelling. By sounding communitarian themes, abjuring any privileged judgmental position, and offering broad meta-commentary rather than focusing on the details of Ukraine, he seemed more restrained and less obviously partisan than the Democratic witnesses, who seemed to be using their legal or historical expertise to claim some kind of privileged political judgment. Furthermore, Turley was right about the narrowness of this impeachment and about the absurdity of imagining that it really matters to anyone, other than perhaps their students and their moms, what these three law professors think about Trump.

This does not make him right. He is wrong. And there is a stronger and broader case for impeachment to be made. But the Democrats are not making it. And by proceeding in such a legalistic way, they are making themselves vulnerable to the rhetorical populism that is being predictably, and scurrilously, invoked by the Republicans, who repeatedly alluded to the elitism and the arrogance of the “Democrat” legal experts who think that they know what is best for us all.

If the Republicans can call a Democratic legal witness to help them make their case, why can’t the Democrats be smart enough to make at least one of their witnesses be a very public Republican? Why not call George Conway, or Charles Fried, or another prominent conservative jurist who has publicly declared that Trump is an autocrat who deserves to be impeached? Why not make rhetorical use of the fact that hundreds of Republican legal scholars and former prosecutors have publicly denounced Trump’s abuses of office? (And entering one of their unnamed texts “into the record” serves no public purpose whatsoever!) Why rely so heavily on three liberal legal scholars from elite institutions? Does this make political sense?

Indeed, why bring only legal scholars as witnesses? The impeachment is not a legal proceeding. But apparently the Democrats can only think like lawyers. At one point in the hearings, after Turley defended Andrew Johnson, one of my Facebook friends posted “where is Eric Foner when you need him?” Precisely! Eric Foner is not a legal scholar. But he is a brilliant, charismatic historian who can more evocatively speak about the history of democracy in the U.S than any one of the designated Democratic experts. Why not bring him to testify? Does it count against him that he is a compelling teller of narratives?

The most important words in the U.S. Constitution are not contained in the impeachment clause of Article II. They are the words of the Preamble, beginning with “We the People.”

There are a great many historians, political scientists, and even journalists, who are telegenic and charismatic and who can speak compellingly and with authority, not simply about the Constitutional text but about the broader ideas of fairness and accountability and equality before the law that lies at the heart of our constitutional democracy. Trump violates all of these values, always. Ukraine is one example. But the details of Ukraine don’t need to be rehearsed again. What needs to be rehearsed is why they matter. This is not a narrowly legal question. And it is not a question about what “high crimes and misdemeanors” means or even what James Madison intended. It is a question about the core values of a constitutional democracy, why we all should care about them, and how bad things happen when we stop caring.

At one point in the hearing, Professor Karlan explained that Article II speaks broadly about “bribery” because there had not before been an official called “President,” and the notion of constraints on a President was thus unprecedented. She said this in passing, as if it were widely understood. But most Americans do not know that the Constitution created the institution of the president as an anti-monarch. They don’t know how novel the U.S. Constitution is in historical terms (alas, this is true even of many of those who have been students in our classes). They need to be better informed about how and why the Constitution, with all of its real flaws, is in many ways a revolutionary document, precisely because it rejects monarchy and inherited authority and replaces them with idea of “We the People.” And this idea has come to mean not simply “elections,” but fair elections based free debate and political competition, in which public officials are publicly accountable and do not own their positions.

There were moments in Wednesday’s hearings where this theme was sounded loudly. Most of them involved the impressive Professor Karlan, though the perorations of Reps. Hakim Jeffries and Jamie Raskin about democracy also deserve notice, and Nadler himself gave a creditable closing speech. But these moments were too few and far between, and they were lost in a blizzard of often boring and repetitive commentary.

The Democrats could have done a much better job of carefully choosing witnesses who might have really been compelling to “undecided” citizens, who are not legal scholars and whose very reputations could obviously refute the suggestion that their testimony was partisan or ideologically-based. They could have done a better job of framing the purpose of the first day of testimony relative to the broader process and narrative they wish to present, emphasizing that they were less interested in the witness opinions about Trump’s conduct than about the values at stake in an impeachment, and the general kinds of abuses that warrant an impeachment inquiry. And they could have done a much better job of saying, repeatedly, what Noah Feldman said, once, in passing: that the real “victim” of Trump’s abuses is not Ukraine but the citizens of the U.S., who deserve a president who does not lie, cheat, and break the law in order to keep his power.

This impeachment is not a narrowly legal matter. It is a political conflict being fought, now, by legal means, but one that will ultimately be resolved by electoral means, in November 2020. If the Democrats do not figure out how to work this process with more political savvy, then the tyrant and his cronies will have four more years in office. And we will all be fucked.