'Absolutely horrific': Trump preparing to roll back restrictions on US military use of landmines 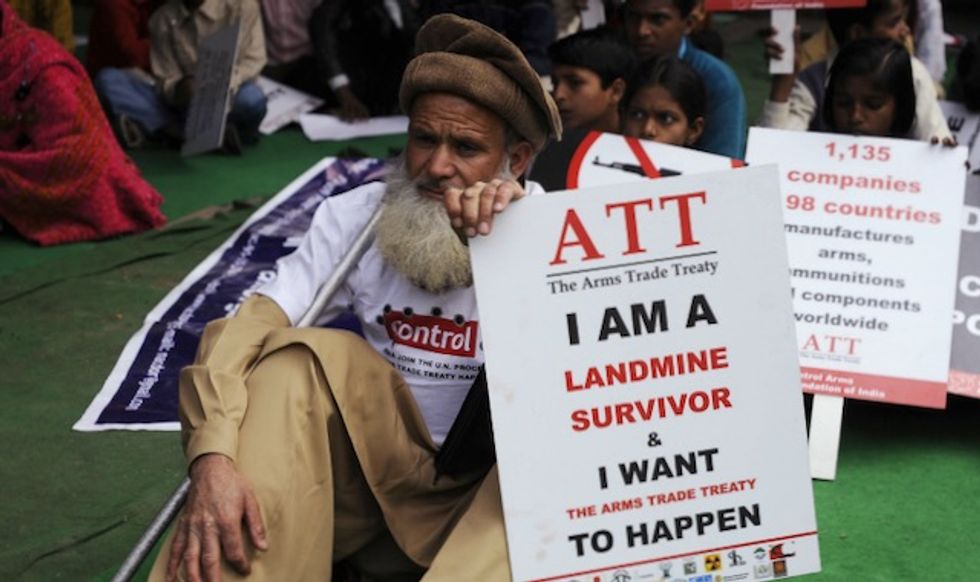 "Trump's policy rollback is a step toward the past, like many of his other decisions, and sends exactly the wrong message to those working to rid the world of the scourge of landmines."

President Donald Trump is reportedly preparing to roll back established constraints on the U.S. military's ability to use landmines overseas despite the weapons' long history of killing and maiming civilians around the world.

CNN, citing multiple anonymous Defense Department officials, reported Thursday that the Trump administration is expected to loosen landmine restrictions in the coming days by rescinding a 2014 order by former President Barack Obama that limited U.S. landmine use to the Korean Peninsula.

"Trump's landmine move would be in line with all of his other moves to undercut arms control and disarmament in a world much in need of them."

"President Obama's policy brought the U.S. policy closely in line with the obligations of the 1997 Mine Ban Treaty," Jody Williams, an anti-war activist who won the Nobel Peace Prize in 1997 for her work to ban landmines, told Common Dreams in an email. "Mr. Trump's policy rollback is a step toward the past, like many of his other decisions, and sends exactly the wrong message to those working to rid the world of the scourge of landmines."

More than 160 nations have ratified the Mine Ban Treaty, also known as the Ottawa Treaty, which prohibits the stockpiling, production, and use of landmines. The United States is one of just 32 U.N. member states that have not ratified the treaty.

"The beauty of the treaty is that it has established a new norm and even countries outside the treaty felt the stigma related to landmines and changed policies, even if they didn't join the treaty," said Williams. "Mr. Trump's landmine move would be in line with all of his other moves to undercut arms control and disarmament in a world much in need of them. The landmine ban movement will do what it has always done with governments that still remain outside the Mine Ban Treaty—push back and continue the push to universalize the treaty—including the U.S."

The Landmine and Cluster Munition Monitor, a non-governmental research initiative, estimated in a November 2019 report that 130,000 people were killed by landmines between 1999 and 2018. The majority of the deaths were civilians.

According to CNN, the Trump administration's new policy will place the authority to use landmines in the hands of "commanders of the U.S. military's combatant commands, usually a four-star general or admiral, such as the commanders of U.S. Africa Command and U.S. Central Command which oversee operations on the African continent and the Middle East respectively."

"So horrific that after decades of international efforts to rid the world of landmines, Trump is about to 'make landmines great again' by loosening restrictions on their use."

The decision to rescind the Obama administration's 2014 policy was recommended following a Pentagon review launched in 2017 by then-Secretary of Defense Jim Mattis.

"So horrific that after decades of international efforts to rid the world of landmines, Trump is about to 'make landmines great again' by loosening restrictions on their use," Medea Benjamin, co-founder of anti-war group CodePink, told Common Dreams.

"Is this what Make America Great Again means? Who in their right mind can justify this?" the group asked. "Landmines have a long history of killing and wounding civilians and are banned by more than 160 countries. Absolutely horrific."