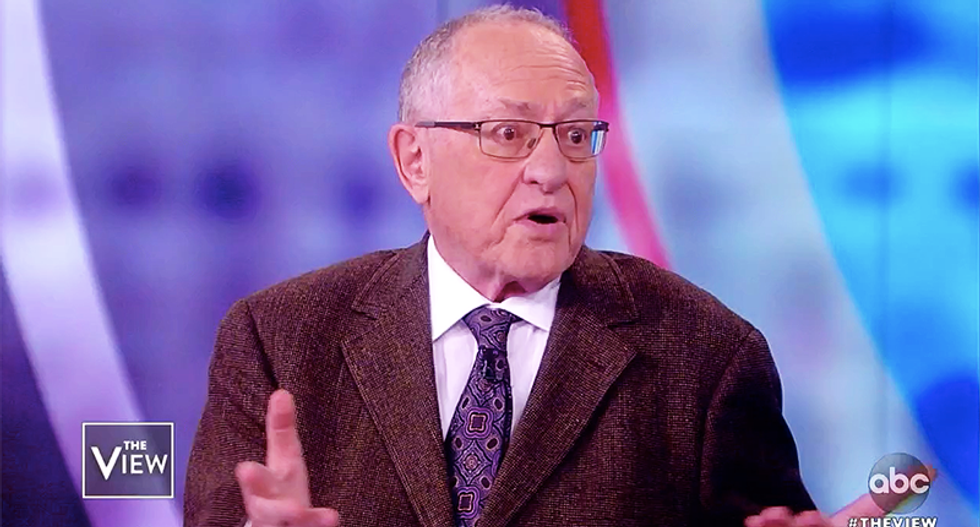 The dust-up started on January 2nd, when University of Minnesota Law Professor Richard Painter, who served as chief White House ethics lawyer in George W. Bush administration, noted that Dershowitz was using the exact same language that Trump has employed in his impeachment defense.

Lee offered her analysis of the shared use of language.

“Alan Dershowitz’s employing the odd use of ‘perfect’—not even a synonym—might be dismissed as ordinary influence in most contexts. However, given the severity and spread of ‘shared psychosis’ among just about all of Donald Trump’s followers, a different scenario is more likely,” she explained.

“There is even proof: his bravado toward his opponent with a question about his own sex life—in a way that is irrelevant to the actual lawsuit—shows the same grandiosity and delusional-level impunity,” Lee argued.

“Also identical is the level of lack of empathy, of remorse, and of consideration of consequences (until some accountability comes from the outside—at which time he is likely to lash out equally),” she wrote.

In the column, Dershowtiz argued why he does not think Lee should be allowed to question the mental health of the president, or himself.

"Publicly offering "professional opinions" or diagnoses in the absence of a psychiatric examination, is a violation of psychiatric ethics and the rules of the American Psychiatric Association," he argued. "Dr. Lee has a history of such unethical conduct. She previously diagnosed President Trump as being psychotic. Now she is doubling down accusing me of having a 'shared psychosis' with President Trump, and having 'wholly taken on Trump's symptoms by contagion.'"

"She also believes that my use of the word 'perfect' -- the same word used by Donald Trump in describing his phone call to the Ukrainian President -- is evidence of a 'shared' psychosis. She does not mention that I used the word 'perfect' in the context of rebutting the false accusations against me and proclaiming, quite truthfully, that I have never had sex with any woman other than my wife, since the day I met Jeffrey Epstein," he wrote. "I used the word 'perfect' in reference to my fidelity during the period in which I was falsely accused, just as someone might say she had a 'perfect' attendance record. Moreover, Dr. Lee neglects to mention that the interview during which I used that word took place months before President Trump used it. I guess she believes he caught the contagion from me."

Dr. Lee said she will not back down.