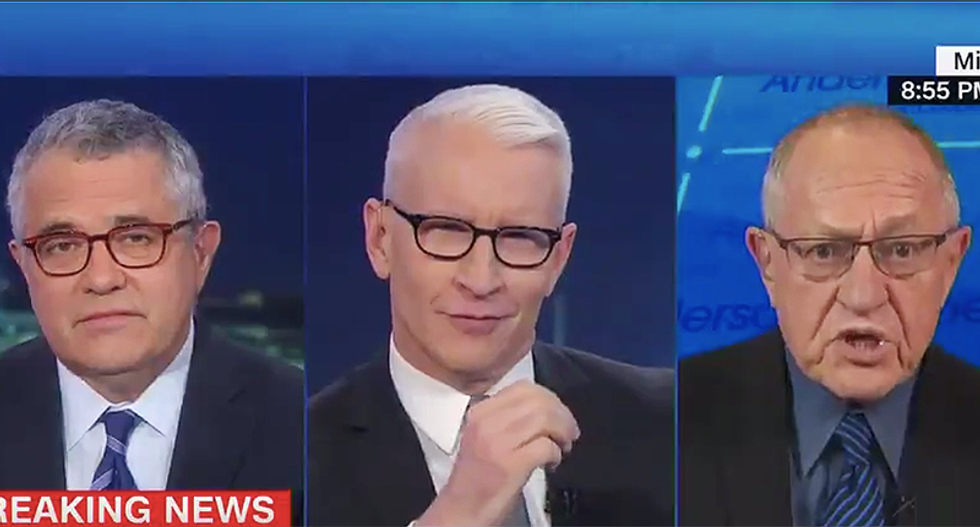 On Monday's edition of CNN's "Anderson Cooper 360," former Harvard Law professor Alan Dershowitz went on the defensive as Cooper and legal analyst Jeffrey Toobin confronted him with his prior statements that impeachment doesn't require a criminal act for President Bill Clinton — which he now says is required for President Donald Trump.

"Back then you said that it certainly doesn't have to be a crime if you have somebody who completely corrupts the office of president, who abuses trust, and who poses great danger to our liberty, you don't need a technical crime," said Cooper.

"But that's not what you said then," said Cooper. "You didn't say criminal-like behavior. You said completely corrupts the office of president, abuses trust, imposes great danger."

"I've done a lot of research. Back then I took the word of many academics who said that," said Dershowitz.

"So you were wrong?" said Cooper.

"No, I wasn't wrong. I have a more sophisticated basis for my argument now," said Dershowitz.

"What is clear is Alan was right in 1998 and he is wrong now," said Toobin. "I mean, the two — the two statements cannot be reconciled. One is right or one is wrong. And the one in 1998 is right. The idea — look, every single law professor that has looked at this issue except you seems to think there is a—"

"He just lied," shouted Dershowitz. "Professor Bowie, who is a professor at Harvard takes my view. Read his article, Jeffrey ... please withdraw that argument that no professor has said it. So you're saying that Professor Bowie doesn't exist?"

"I want to go back," said Cooper. "Previously you said it doesn't have to be a crime if the person in office completely corrupts the office of president and who abuses trust and poses great danger to our liberty, that is impeachable. Now you're saying criminal-like. So corrupting the office of the president, is that in your criminal-like behavior?"

"No, it's not. That was rejected by the framers," said Dershowitz.

"You were wrong back then?" said Cooper.

"I was saying that I'm much more correct right now," said Dershowitz.

"Much more correct? What does that mean?" said Cooper.

"Let me explain. Please don't shut me off. Two against one here," whined Dershowitz. "Let me make my point."

"No. I'm not on anyone's side. I'm trying to rationally understand," said Cooper.

"I still don't think you need a technical crime," said Dershowitz. "And I think your viewers are entitled to hear my argument without two bullies jumping on everything I say ... let's talk what the issues are instead of trying to attack the messenger."