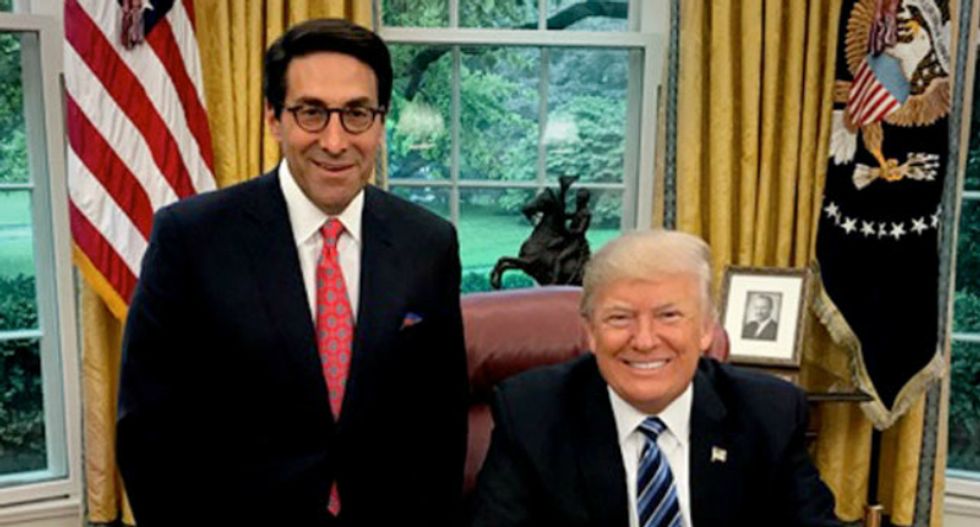 Donald Trump's penchant for telling reporters about his crimes doesn't leave his legal defense team a lot to work with. In the first week of his Senate trial, they've pounded the desk and rended their garments over how mean their Democrats opponents are toward their client. But the worst is yet to come--WaPo reports that during the next phase of the proceedings, Trump's legal team will offer "a scorched-earth defense of President Trump in the impeachment trial, mounting a politically charged case aimed more at swaying American voters than GOP senators — and damaging Trump’s possible 2020 opponent, Joe Biden."

One thing they haven't done is attempt to defend Trump's conduct, and you really can't blame them. But one does have to wonder whether more competent attorneys might be able to come up with a minimally plausible defense, or at least not embarrass themselves.

Trump does have a couple of boring white-shoe lawyers on his team, but the... "colorful characters" he's tapped to represent him have so far been front and center.

Jay Sekulow is not only infamous for filing an endless stream of dubious litigation but, according to The Guardian, is also quite the grifter in his own right.

[In 2009, Sekulow] approved plans to push poor and jobless people to donate money to his Christian nonprofit, which since 2000 has steered more than $60m to Sekulow, his family and their businesses.

Telemarketers for the nonprofit, Christian Advocates Serving Evangelism (Case), were instructed in contracts signed by Sekulow to urge people who pleaded poverty or said they were out of work to dig deep for a “sacrificial gift”.

“I can certainly understand how that would make it difficult for you to share a gift like that right now,” they told retirees who said they were on fixed incomes and had “no extra money” – before asking if they could spare “even $20 within the next three weeks”.

In addition to using tens of millions of dollars in donations to pay Sekulow, his wife, his sons, his brother, his sister-in-law, his niece and nephew and their firms, Case has also been used to provide a series of unusual loans and property deals to the Sekulow family.

Sekulow provided some comedy relief this week when Democratic Rep. Val Demings mentioned "FOIA lawsuits" and he went on a rant about how indecorous it was to demean "lawyer lawsuits" on the floor of the Senate.

Then there's Pam Bondi, the former Florida AG who dropped an inquiry into Trump's fraudulent "university" in 2013 after "personally soliciting" a $25,000 campaign donation from the then-reality TV star (who paid her off out of his fraudulent charity).

And former Clinton prosecutor Ken Starr, who defended Jeffrey Epstein, was fired from his gig as Baylor University president after a scandal over his administration's handling of sexual assault complaints, and later admitted that he had held a fundraiser for a football player who had been accused of rape.

And of course there's Alan Dershowitz, whose arguments today are diametrically opposed from the positions he took back when a Democrat was being impeached and who not only joined Starr in defending Epstein but is also accused of participating in his sexual exploitation of young girls.

What a crew. Any other president would shun them, but they're probably the perfect people to be defending this one.

After claiming that no US servicemen were hurt in the missile strike that Iran launched against American bases in Iraq in retaliation for the Suleimani assassination, Trump said that the traumatic brain injuries we now know many of them suffered were just "headaches" and "not very serious." The nation's leading veterans' group is not happy.

Huffington Post: "The president’s Miami golf resort that puts money into his pocket more than doubled its room rates just before the White House announced his Thursday visit ― possibly increasing taxpayer costs for staff who must travel there in advance."

Trump has spent one-third of his presidency staying at his own luxury properties.

Politico also took a deep dive this week into how "Donald Trump has accomplished something no president before him has done: fusing his private business interests with America’s highest public office."

At The Bulwark, Tim Miller writes that our government is doing this to justify one of the regime's endless stream of lies:

Omar Ameen is an Iraqi-American refugee currently housed in a maximum security cell an hour up the road from me in Sacramento. The United States government contends that Ameen is an ISIS commander who infiltrated the refugee stream coming out of the Middle East. He awaits a hearing next week that could result in his extradition back to a certain death in Iraq.

And yet all of the evidence indicates Ameen is not, in fact, an ISIS commander, but instead an innocent man who fled the sectarian violence and bloodshed that we contributed to in his home country in order to live out what was once considered the American dream with his family here.

New York Times: "The Trump administration on Thursday finalized a rule to strip away environmental protections for streams, wetlands and groundwater, handing a victory to farmers, fossil fuel producers and real estate developers."

It's also a gift to golf clubs and their owners.

This, via Politico, is a stealthy way of cutting federal programs...

The Trump administration is finalizing a plan to let states convert a chunk of Medicaid funding to block grants, even as officials remain divided over how to sell the controversial change to the safety net health program.

According to NPR, Immigration and Customs Enforcement (ICE) has a detention facility in California that its own watchdog says is a mismanaged Hellhole, but despite knowing about a host of serious problems since at least 2017, the agency "decided at the end of 2019 to renew and expand a contract" to keep the facility open.

ICE's sister agency, Customs and Border Protection (CPB), has funneled millions of taxpayer dollars into a sponsorship of the Professional Bull Riders association that amounts to a thinly-concealed propaganda operation.

USA Today reported this week that several of the sport's biggest stars chased suspected unauthorized immigrants on horseback during a PR stunt at the border last July.

Speaking of the rule of law, a district court blasted the regime this week for simply ignoring one of its rulings.

A federal appeals court had scathing words for the Justice Department after it ignored a remand order and called the panel’s original order incorrect...

“We have never before encountered defiance of a remand order, and we hope never to see it again,” [Judge Frank] Easterbrook wrote. “Members of the board must count themselves lucky that Baez-Sanchez has not asked us to hold them in contempt, with all the consequences that possibility entails. The Board seemed to think that we had issued an advisory opinion, and that faced with a conflict between our views and those of the Attorney General it should follow the latter.”

"A Law Required The US’s Top Intelligence Official To Turn Over A Report On Jamal Khashoggi’s Killing. He Blew The Deadline."

Your government's priorities, in a nutshell...

Very pro-life of them.

This week, we leave you with a couple of reading recommendations.

The Guardian ran an exposé of The Base, a violent neo-Nazi terror organization, and also unearthed the identity of the group's shadowy leader, who may or may not be a federal agent.

And at Mother Jones, Ari Berman explains the Trump regime's new "stealth" effort to use this year's Census to "preserve white electoral power."