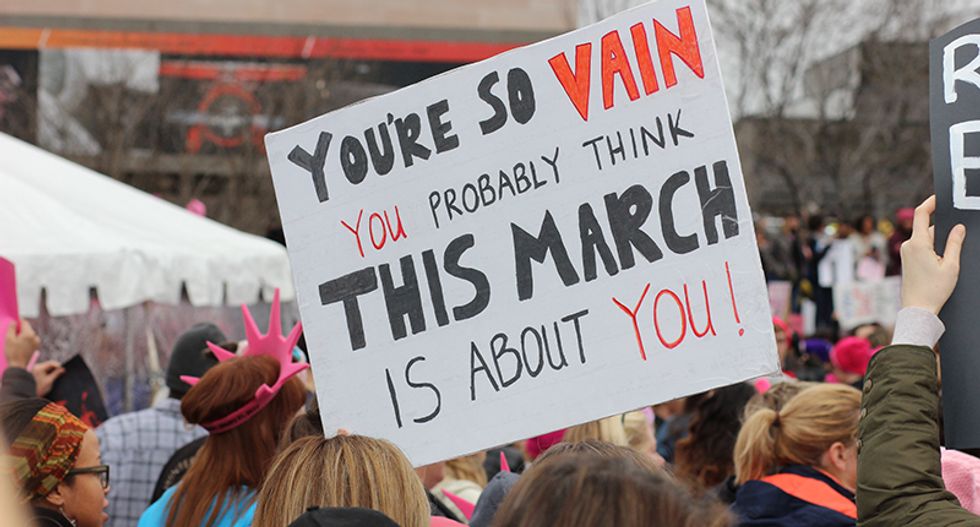 The National Archives were caught editing an artifact from the Trump administration to remove criticism of the president, according to a bombshell new report in The Washington Post.

The newspaper reported on a "large color photograph" at the National Archives exhibit marking the centennial of women's suffrage.

"The 49-by-69-inch photograph is a powerful display. Viewed from one perspective, it shows the 2017 march. Viewed from another angle, it shifts to show a 1913 black-and-white image of a women’s suffrage march also on Pennsylvania Avenue. The display links momentous demonstrations for women’s rights more than a century apart on the same stretch of pavement. But a closer look reveals a different story," the newspaper noted.

"The Archives acknowledged in a statement this week that it made multiple alterations to the photo of the 2017 Women’s March showcased at the museum, blurring signs held by marchers that were critical of Trump. Words on signs that referenced women’s anatomy were also blurred," the paper explained.

"A placard that proclaims 'God Hates Trump' has 'Trump' blotted out so that it reads 'God Hates.' A sign that reads 'Trump & GOP — Hands Off Women' has the word Trump blurred out," The Post explained.

The word "vagina" was also blurred out.

“As a non-partisan, non-political federal agency, we blurred references to the President’s name on some posters, so as not to engage in current political controversy,” Kleiman argued.

Rice University historian Douglas Brinkley blasted the National Archives for the decision to photoshop the image.

"There's no reason for the National Archives to ever digitally alter a historic photograph," Brinkley explained. "If they don't want to use a specific image, then don't use it. But to confuse the public is reprehensible. The head of the Archives has to very quickly fix this damage. A lot of history is messy, and there's zero reason why the Archives can't be upfront about a photo from a women's march."

"Doctoring a commemorative photograph buys right into the notion that it's okay to silence women's voice and actions," Kline told the newspaper. "It is literally erasing something that was accurately captured on camera. That's an attempt to erase a powerful message."