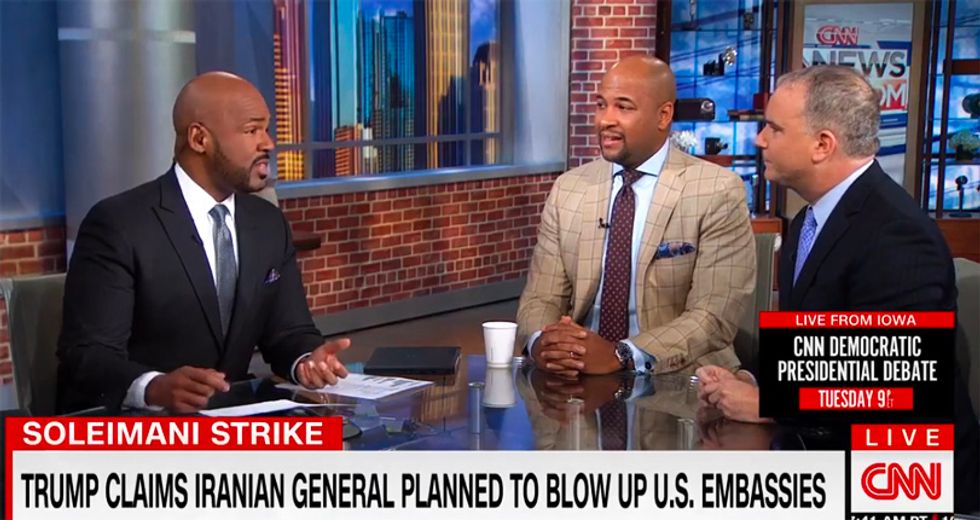 "You do need to defend the argument that it's imminent, right?" said anchor Victor Blackwell. "You have to defend that element. Otherwise it's illegal."

"I think he can go out and say it was imminent," said Robinson. "We had good intelligence to work on. We know what this guy's record is. Even Democrats admit this guy is a terrorist and murderer of innocents. We know he was a bad guy."

"Bad guy, killer, he should be dead — none of that equals imminent," said Blackwell.

"Two, three weeks is imminent when you only get so many opportunities," said Robinson.

"It was not imminent, and at the end of the day we're playing with national security," said Johnson. "The number one objective is protect the homeland. Keep American lives safe. For him to basically, I believe, just act off belief or a feeling, not the intelligence, not the numbers, not the departments that are there to make sure they give him the intelligence to make these decisions, I think you see a waffling flip-flop from this president. Again, I think he needs to today, tomorrow show this imminent factual evidence that made him go over and attack Iran. If he can prove it, great. If he can't, we've got to call it what it is, that he's lying and taking us to war, putting American troops' lives on the line basically on re-election efforts and political beliefs. If it's not imminent or factual and based on intelligence, what is it?"

Arizona taxpayers could be on the hook for a $9 million bill after GOP subpoenas routers: report

On Monday night, Bill Gates, a Republican member of the Maricopa County Board of Supervisors, revealed on CNN that the Republican-controlled Arizona Senate has had Maricopa County officials served with a new subpoena seeking their routers for its audit of the 2020 election.

Appearing on CNN, Gates stated, "Right before I came on here, the board of supervisors received another subpoena from the state Senate ordering us to turn over the routers, in addition to some other information. And they threaten us in these papers that if we do not turn those over by Aug. 2. So that's next Monday, then we could be held in contempt."

Rep. Adam Kinzinger (R-IL), one of the two GOP members of the House Select Committee to Investigate the January 6th Attack on the United States Capitol, choked up during his opening statement on Tuesday.

"I never expected today to be as quite as emotional for me as it has been. I've talked to a number of you and have gotten to know you, I think it's important to tell you right now, though, you guys may, like, individually feel a little broken. You guys all talk about the affects you have to deal with, and you talk about the impact of that day. But you guys won," he said, holding back tears.

A congressional committee held its first hearing investigating the Jan. 6 U.S. Capitol attack on Tuesday with testimony by four police officers who struggled against a mob of then-President Donald Trump's supporters engaging in "medieval" violence and warnings from lawmakers against whitewashing the riot.

At the Democratic-led House of Representatives investigatory committee's first hearing, the officer, Aquilino Gonell, described being pummeled by rioters fired up by Trump's false claims that the election was stolen from him through widespread voting fraud.