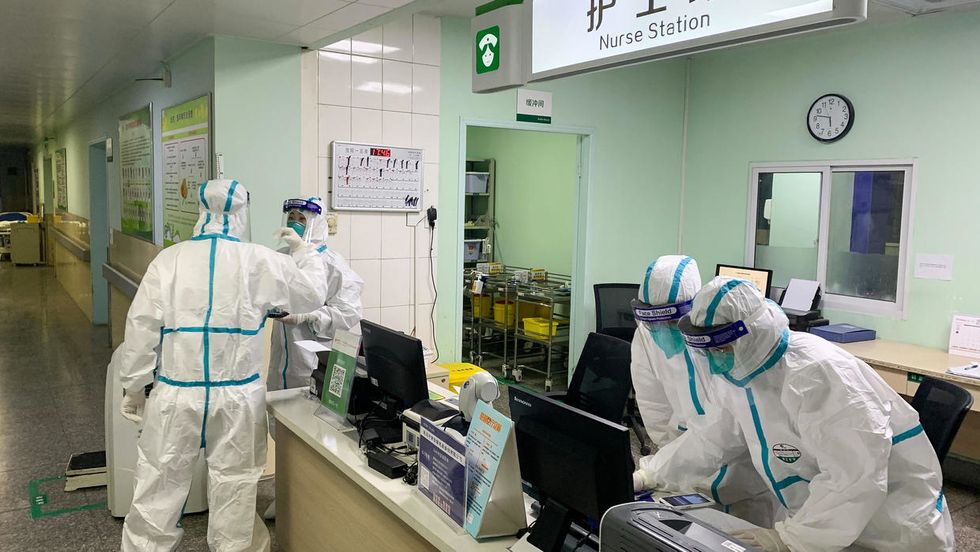 China reported its biggest single-day jump in novel coronavirus deaths on Thursday, as confirmation that three Japanese evacuated from the outbreak's epicentre were infected deepened fears about a global contagion.

The World Health Organization, which initially downplayed the severity of a disease that has now killed 170 nationwide, warned all governments to be "on alert" as it weighed whether to declare a global health emergency.

As foreign countries evacuated their citizens from Wuhan, the locked-down city where the virus was first detected, concern over the economic impact has steadily intensified.

Airlines have suspended services to China and companies from Starbucks to Tesla have shuttered stores and production lines.

Chinese authorities have taken extraordinary steps to arrest the virus's spread, including effectively locking down more than 50 million people in Wuhan and surrounding Hubei province.

But that was yet to pay dividends, with the government reporting 38 new deaths in the 24 hours to Thursday, the highest one-day total. All but one were in Hubei.

The number of confirmed new cases also grew steadily to 7,711, the National Health Commission said. Another 81,000 people were under observation for possible infection.

The pathogen is believed to have been spawned in a market that sold wild game, spreading far and wide by a Lunar New Year holiday season in which hundreds of millions of Chinese travel domestically or abroad.

Japan's infection rate grew to 11 after three Japanese citizens among more than 200 on an evacuation flight Wednesday tested positive.

Officials had already confirmed two cases in which patients tested positive without having travelled to China, adding to anxiety over human-to-human transmission of the respiratory disease.

"We are in a truly new situation," Health Minister Katsunobu Kato told parliament.

The fact that two of the three new confirmed Japanese cases showed no symptoms underscored the scale of the challenge for health workers.

The WHO has come under fire after it last week declined to declare a global health emergency.

The global health body's chief Tedros Adhanom Ghebreyesus expressed regret for what he called a "human error" in the WHO's assessment.

WHO's Emergency Committee will meet Thursday to decide whether to declare an emergency -- which could lead to travel or trade barriers.

"The whole world needs to take action," Michael Ryan, head of the WHO Health Emergencies Programme, told reporters in Geneva.

A US charter flight from Wuhan arrived Wednesday at a California military base with nearly 200 consular staff and other Americans, who "cheered loudly" when the jet touched down, said an official with US Centers for Disease Control and Prevention.

All passengers were declared symptom-free but will remain isolated for days while they are monitored.

Some 250 French citizens and 100 other Europeans will be flown out of Wuhan on board two French planes this week.

Australia plans to house any citizens it evacuates from the city on an island normally used to detain asylum seekers.

A growing number of governments -- including the United States, Britain and Germany -- have advised their citizens to avoid non-essential travel to China.

China also has urged its own citizens to delay trips abroad, after more than 15 countries confirmed infections.

Major airlines that have suspended or pared back service to China include British Airways, German flag carrier Lufthansa, American Airlines, KLM, and United.

China efforts to halt the virus have seen the suspension of classes nationwide and an extension of the Lunar New Year holiday.

Most street traffic in and around Wuhan has been banned.

"This is the first day since the lockdown that I've had to go out," a man in his 50s told AFP on the mostly deserted streets of the industrial city.

"I have no choice because I need to buy food."

China's football body meanwhile said it was postponing "all levels and all types of football matches across the country", including the country's top-tier Chinese Super League, in response to the outbreak.

As the "world's factory", the disruptions in China are expected to send ripples through supply chains globally, denting profits.

US Federal Reserve Chairman Jerome Powell said the new coronavirus posed a fresh risk to a fragile world economy, adding that the US central bank was on alert.

"There will clearly be implications at least in the near term for Chinese output and I would guess for some of their close neighbours," Powell said.

The contagion has spread to nearly every corner of China, with remote Tibet reporting its first case on Thursday.

It has triggered fears in part due to its striking similarity to the Severe Acute Respiratory Syndrome (SARS) outbreak of 2002-03, which also began in China and eventually killed nearly 800 people worldwide.