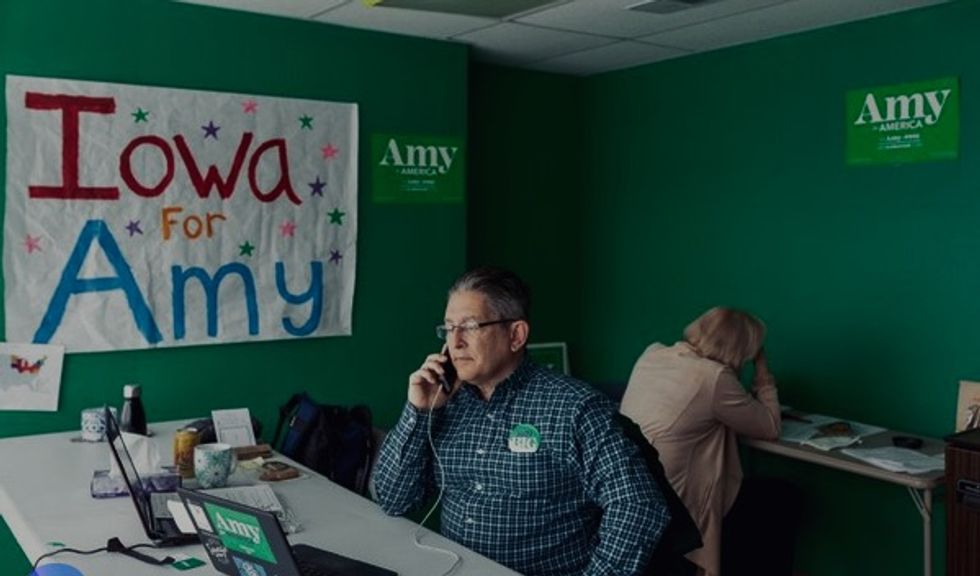 In the snow and bitter cold of an Iowa winter, thousands of volunteers from across the United States knock on doors and tout their candidate for next week's Democratic primary, their unpaid labor a testimony to how crucial they believe the vote is likely to be.

Wearing a bright yellow teeshirt emblazoned with the name Pete Buttigieg, the youngest candidate in a very large field, volunteer George Biagi had just arrived at Des Moines airport to join the fray from the sunnier climes of California.

Like some 2,300 other volunteers who have come here off their own bat, with no official ties to the campaign, Biagi -- a council worker from San Diego -- said that he had paid for the trip from his own pocket.

"It's these early states we're concentrating on because we feel like if we can make a big splash for Pete in those states then ... it'll just take off and then the rest will be history, hopefully," he told AFP.

The first openly gay candidate with a shot at the presidency, Mayor Pete, as he is popularly known, "is very inspiring. He's kind, he's thoughtful, he's articulate, you know, he's a veteran. He's a generational change," said Biagi, 59, who like the former mayor of South Bend, Indiana, is also gay.

Polling fifth across the nation and third in the Iowa polls, Buttigieg is among the front runners for the nomination. But even lesser known candidates are managing to rally their troops in Iowa ahead of next week's primary.

At 23 years old, Iowa was the first time Negede Tadesse had seen snow.

Inspired by the wealthy business leader and presidential hopeful Andrew Yang, he did not think twice about taking an unpaid leave of absence from both of his jobs -- as a telemarketer and an X-ray technician -- to fly from Los Angeles to Iowa.

He has spent a couple of weeks knocking on the doors of hundreds of Democrats whom he hopes to convince that Yang, an unknown on the national stage just a year ago, is the best bet to unseat President Donald Trump in November.

"It's not easy for me, it's not like I'm rich," he said. "I need money, I need the work, but I believe in this campaign and we only have one shot."

Yang's proposal to pay everyone in the United States a monthly basic income of $1,000 to make up for the losses likely to be incurred from the automation of jobs by artificial intelligence has resonated across party lines in Iowa, the young man said.

He said he is confident for Monday night's caucus, when Democratic voters will gather in 1,700 meeting halls across the state to choose their candidate publicly, by standing in one part of the room or another.

Even if one candidate out of the dozen in the running emerges as the sure-fire favorite, a good performance in Iowa can fire up the campaign of a lesser known wannabe.

That's what Tadesse is hoping for Yang, but also what Winston Taylor, 20, wants to see for his preferred candidate, the moderate senator Amy Klobuchar.

A student of political science, from Minnesota like Klobuchar, he has taken a break from classes to work for her team.

"Amy's the one who I think even in this incredibly divided partisan time actually has the best chance to keep her promises," he said.

The best time to knock on doors, he said, is early afternoon, when it's light out and a little warmer in this state where temperatures can plunge to five degrees Fahrenheit (-15 Celsius).

Everything will depend on turnout on Monday night, especially for the two favorites, former vice president Joe Biden and independent senator Bernie Sanders.

That means it is now down to the volunteers and campaign organizers to make the crucial difference in this final stretch.

"It is all hands on deck, reaching out to as many people as humanly possible," said Taylor.