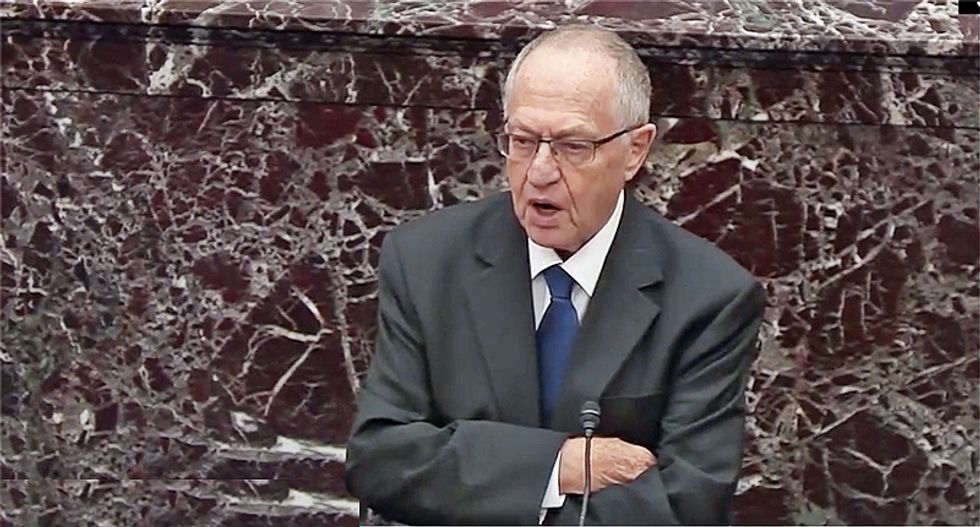 Trump defender Alan Dershowitz is once again being mocked for his latest claim, that presidents can use the tools of the State to win re-election because they believe holding office is in the public interest.

The Harvard law professor made the claim during  the question and answer session of Wednesday afternoon’s Senate impeachment trial.

Am I wrong to interpret Dershowitz’s argument to be that if a president were to walk down the street and start exec… https://t.co/gmjxPArYJL
— Bradley P. Moss (@Bradley P. Moss) 1580326679.0

This is absurd. Dershowitz is arguing that as long as you believe that you winning an election will be a good thing… https://t.co/4vCeZbmBIX
— Brian Klaas (@Brian Klaas) 1580326509.0

Dershowitz -- cheating in an election is ok as long as the candidate thinks he's a better candidate.
— Joe Lockhart (@Joe Lockhart) 1580325715.0

That was the craziest 5 minutes of this whole thing. Dershowitz looks like he's trying throw the case.
— Joe Lockhart (@Joe Lockhart) 1580325465.0

.@AlanDersh just argued that a president who believes only he can fix it — who thinks his re-election is vital to t… https://t.co/Qnpnun8zCC
— Laurence Tribe (@Laurence Tribe) 1580327350.0