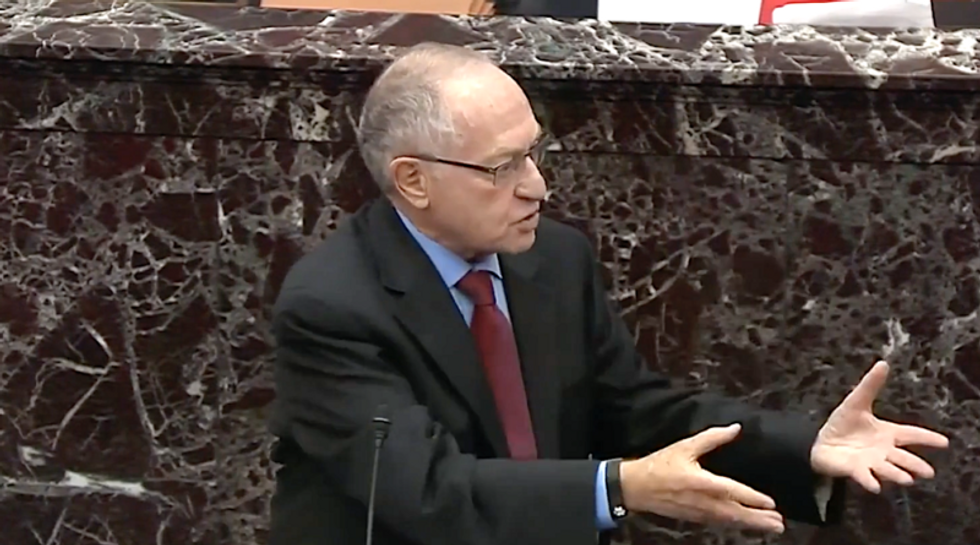 "What if a Democratic president were to be elected and Congress were to authorize much money to either Israel or the Palestinians, and the Democratic president were to say to Israel: 'No -- I'm gonna withhold this money unless you stop all settlement growth,' or to the Palestinians: 'I will withhold the money Congress authorized to you unless you stop paying terrorists,' and the president said -- quid pro quo -- 'If you don't do it, you don't get the money; if you do it, you get the money.' There's no one in this chamber that would regard that as in any way unlawful."

"The only thing that would make a quid pro quo unlawful is if the 'quo' were in some way illegal," Dershowitz continued. "Now, we talk about a motive -- there are three possible motives that a political figure can have: one, a motive in the public interest ... the second is in his own political interest, and the third, which hasn't been mentioned, would be in his own financial interest."

"And if a president does something which he believes will help him get elected in the public interest, that cannot be the kind of quid pro quo that results in impeachment."

In the wake of Alan Dershowitz's argument, Washington Post reporter Jacqueline Alemany tweeted that she spoke with one of Dershowitz's former colleagues at Harvard Law, who said that Dershowitz actually gave the "very best argument for getting Bolton’s testimony" in order to determine whether Trump's motives were "different from in the [national] interest to be re-elected."