Economists 'surprised Americans aren't revolting' over $8,000 tax they pay each year due to for-profit healthcare system 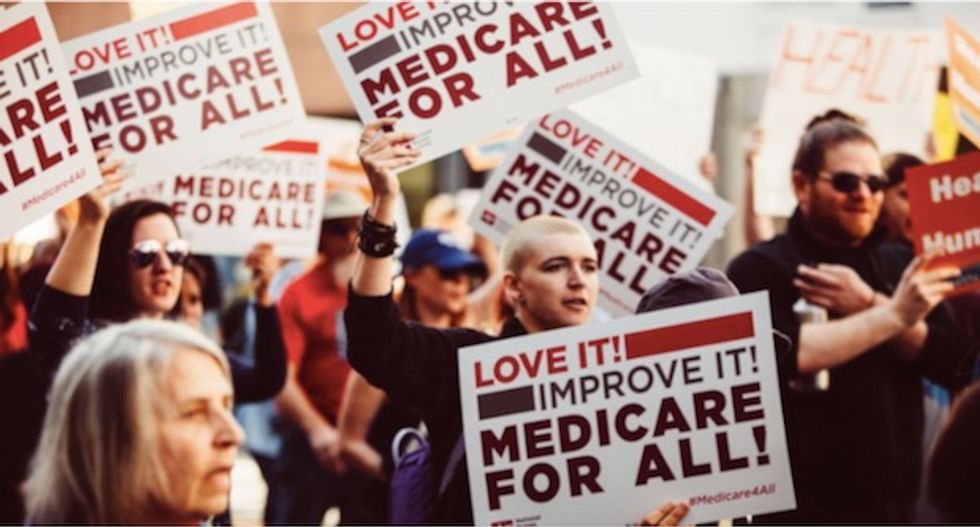 Image by Molly Adams via Flickr and a CC license

Highlighting the thousands of dollars American households are forced to pay in healthcare costs that people in other wealthy countries save thanks to universal healthcare plans, two top economists wondered aloud this weekend why Americans have accepted increasingly high costs and poor health outcomes for decades.

At the annual meeting of the American Economic Association in San Diego on Saturday, Princeton University economists Anne Case and Angus Deaton said they were "surprised Americans aren't revolting against" the $8,000 per year that U.S. households pay to doctors, hospitals, health insurance companies, the pharmaceutical industry, and the rest of the for-profit healthcare system, compared to what people in other countries.

"A few people are getting very rich at the expense of the rest of us," Case said.

Case and Deaton compared the yearly costs to a poll tax, or head tax, because the costs apply to all Americans regardless of their ability to pay. Americans pay $8,000 a year more than what people in Switzerland pay to that country's system—the second-most expensive healthcare system in the world after the United States.

The payments made to the U.S. healthcare system are "like a tribute to a foreign power, but we're doing it to ourselves," Case said.

Calling the expenditures "a tax" led one single-payer healthcare advocate on social media to question the premise used by many people who oppose Medicare for All on the grounds that some Americans' tax bills would rise slightly to pay for the program.

"I've been trying to get this message across for years now," tweeted former congressional candidate and physician Kathie Allen. "So what if your taxes went up modestly?"

While campaigning for the Democratic nomination in the 2020 presidential race, Sens. Bernie Sanders (I-Vt.) and Elizabeth Warren (D-Mass.) have also rejected the notion that Americans should fear higher taxes under Medicare for All, considering the annual "tax" they essentially pay to the for-profit healthcare industry.

Case and Deaton, who are the authors of an upcoming book called Deaths of Despair and the Future of Capitalism, say skyrocketing healthcare costs over the past two decades have helped drive the rising number of deaths from opioid overdoses, alcohol-related diseases, and suicide.

"We can brag we have the most expensive healthcare. We can also now brag that it delivers the worst health of any rich country," Case said.

Case and Deaton spoke two days before researchers at the University of Michigan released a study showing that because of price-gouging by the for-profit healthcare industry, the cost of childbirth in the U.S. went up by about $1,500 from 2008 when it cost about $3,000 to 2015 when the average rose to more than $4,500—an increase of more than 50 percent.

Although the net costs associated with childbirth remained relatively stable over that time period, the Affordable Care Act's "relative lack of restrictions on things like co-pays and deductibles" allowed insurance companies to "sneakily shift the financial onus onto [patients] by charging them more upfront," according to Claire Lampen at The Cut.

Case and Deaton's statements on healthcare costs led to renewed calls on social media for Medicare for All.

"Nobody should have to choose between their health and providing for their family, yet that is the reality for so many Americans," tweeted Rep. Carolyn Maloney (D-N.Y.).