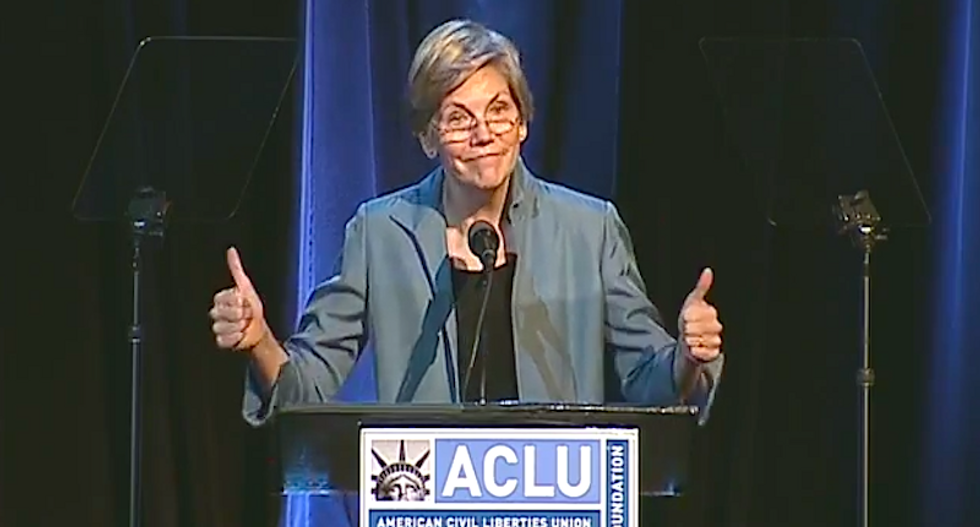 Sen. Elizabeth Warren (D-MA) received a coveted endorsement on Saturday evening when her 2020 bid was endorsed by the Des Moines Register newspaper.

"Who would make the best president at this point in the country’s history? At a time when the economic deck has become so stacked against working Americans that the gap between rich and poor is the highest in more than 50 years? At a time when a generation of war has stressed military families and sapped the treasury?" the newspaper asked. "The Des Moines Register editorial board endorses Elizabeth Warren in the 2020 Iowa Democratic caucuses as the best leader for these times."

"She believes access to health care is a human right.

"She would make climate change a top priority and use her executive power to roll back Trump administration policies that prop up fossil fuels. She says corporations should have less Washington influence, children should be protected from gun violence, child care should be affordable, immigrants deserve compassion, mass incarceration should end and the wealthy should pay more in taxes," the editorial board noted. "Those ideas are not radical. They are right."

"We need a president who can work the levers of government to translate ideas into signed laws and effective regulations. We need a president committed to bringing our troops home from open-ended foreign entanglements. We need a president who understands that the American dream itself is at risk: the ideal that someone who works hard and plays by the rules can get ahead, and that their children will do even better," the newspaper explained. "With Warren, the Oval Office will be occupied by someone who has made rebuilding the middle class her life’s work."

"Warren’s competence, respect for others and status as the nation’s first female president would be a fitting response to the ignorance, sexism and xenophobia of the Trump Oval Office," the editorial added. "At this moment, when the very fabric of American life is at stake, Elizabeth Warren is the president this nation needs."

Wednesday in Philadelphia bore witness to one of those moments in politics where it's hard to avoid succumbing to pure cynicism. Florida's Republican Gov. Ron DeSantis made his way to the City of Brotherly Love to receive an "award" from a group called the Union League, a once-venerable institution that has turned itself into a right-wing country club. Unsurprisingly, he was most definitely not welcome in the very liberal, racially diverse city, especially after recent reports that DeSantis had banned African-American history courses on the grounds that they have no "educational value." Sure enough, his appearance was met with a robust protest that featured Black community leaders giving speeches denouncing racism and a crowd of people waving queer inclusivity flags and holding up Black Lives Matter signs.

Watching this spectacle on social media, I was torn.