'Erratic, reckless, impulsive and destructive': Group of psychiatrists urge a evaluation of Trump as he poses 'a maximum danger' 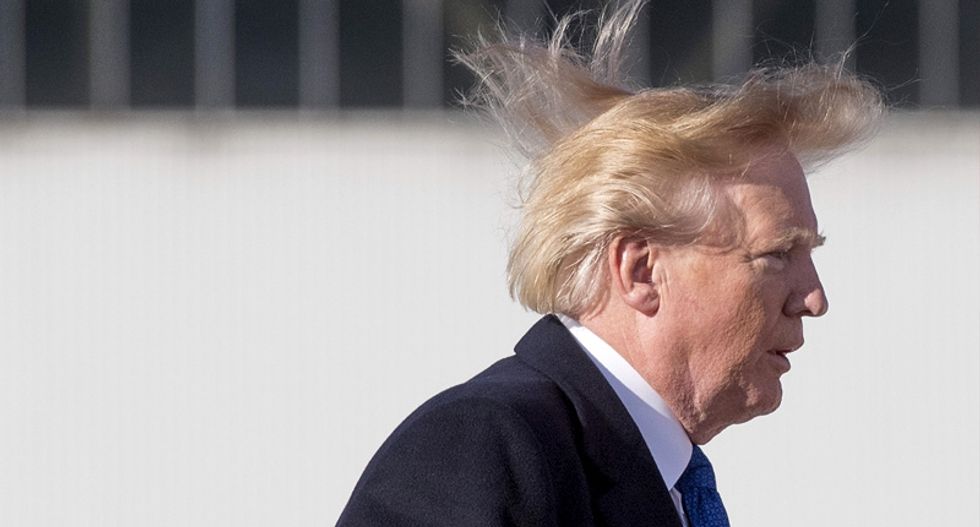 A Yale psychiatrist leads a group of medical professionals who have called on Congress to demand that President Donald Trump undergo a mental health evaluation after he ordered a drone strike that killed top Iranian military official Qassem Soleimani.

"We have been seriously warning about this for some time. The U.S. Congress must act immediately and forcefully without further delay," the group said in a statement, describing Trump as "psychologically and mentally both dangerous and incapacitated."

Senior military leaders must pass annual psychiatric evaluations, but Trump is exempt from such evaluations, even though he is "the person in most need and who is a maximum danger," according to the statement.

The psychiatrists warned that Americans "cannot wait any longer to deal with the dangerous situation caused by a mentally compromised person acting in erratic, reckless, impulsive and destructive ways."

Since Congress has the constitutional authority to fund military action, the statement urges Congress to "act immediately to take any war-making powers out of his hands," adding that it is "imperative that the Congress be equipped with accurate information" from medical professionals qualified in "assessment and management of psychological dangers."

"We urge Congress to consult with us for a profile, if not evaluation, and to take seriously the mental health aspects that are at play in this mentally impaired president," the statement concluded.

Lee spoke with Salon about the need for Trump to undergo a psychiatric evaluation, the danger posed by his actions in the Middle East and the criticisms her comments have received from other mental health professionals. Lee said her views represent those of the World Mental Health Coalition and no other institution.

The World Mental Health Coalition recently urged Congress to demand Trump undergo an evaluation. What do you hope this statement will accomplish? What would this look like? Is there a congressional process for demanding the president be evaluated by a psychiatrist?

The statement was in response to Qassem Soleimani's assassination, which was precisely the kind of emotion-driven incident we warned against in our petition a month ago. Now that his own defense secretary contradicted that there was an imminent threat to four embassies — the reason the president gave — I believe most people can now see how his internal processes supersede security considerations. We barely averted an all-out war — not for our doing — and we shouldn't wait until a similar crisis erupts again.

If the Congress continues to treat this matter as pure politics, it will misunderstand the nature of the problem and be compromised in handling it. Congressional committees consult with experts all the time, and the nation's top mental health experts are eager to be of service. We have also established an independent expert panel for the evaluation of presidential fitness based on medical criteria only. It does not have to be us, but the panel needs to be independent, given the usual compromise of White House-employed physicians.

The statement came in response to Trump's speech following Iran's retaliatory attack last week. What do you make of the president's apparent difficulty in pronouncing words and his repeated sniffling during his statement?

These are obviously abnormal signs. He has shown severe emotional, cognitive and neurological signs, including intoxication, for some time. Getting him an urgent evaluation, as well as treatment, would only be the humane thing to do — both for him and for the country.

You note in the statement that senior military leaders must undergo annual psychological evaluations, thus the military officials advising Trump are presumably of sound mind. Why do you think these officials publicly support the president's actions if he poses as large a danger as you say?

We know that Pentagon officials were stunned that he chose the most extreme option. The statements are extraordinary, if we consider that military officials are trained not to question their commander-in-chief. I believe it is clear we have no control over him. People mistake Donald Trump for being less likely to go to war because of his timidity and his promise to "end endless wars." But a cowardly person with a fragile sense of self is exactly the kind of person who resorts to violence — or can be manipulated into doing so if there are nefarious interests.

You suggest that the president should undergo an evaluation the same way military officials get annual evaluations. Would you want to see all presidents undergo an annual psychological evaluation?

Yes. Almost every job dealing with life-and-death matters in this country has a psychological fitness-for-duty test built in. Yet, the most consequential job, now capable of extinguishing multiple species on the planet based on one person's decision, is not required to possess even basic rationality.

Salon recently spoke with Amy Barnhorst, a psychiatrist at UC Davis. She said she doesn't believe an evaluation or even an involuntary mental health hold would be effective in impacting Trump's behavior or position. How do you respond to your peers who argue that your proposals damage the profession and do little if anything to rein in Trump?

The interview exemplifies our problem of scale. We can explain away the need for intervention —even when we have the medical and legal authority — through absurd technicalities. It comes out of fear. This is what the American Psychiatric Association did in the beginning of this presidency when it dug up the obscure "Goldwater rule" and turned it into a gag order, losing sight that the original rule was meant to protect society — not the public figure. Now we have the extraordinary situation of facing the greatest public mental health emergency in our lifetimes, and the mental health authorities are missing in action. I say the profession has already damaged itself, and some of us are trying to salvage it.

Encroaching tyrannies want professionals to be mere technicians that they can control and use. Medical professionals, without a moral compass, can become instruments of the worst atrocities. This is precisely the situation for which the Declaration of Geneva was created: "Do not lose sight of your humanitarian obligation for technicalities" is basically its message from the experience of Nazism. Our critics compare us to Nazi and Soviet psychiatrists, but they abandoned professional standards to serve the state. We are advocating that we keep with professional standards, even if it displeases the state.

To assess legal or constitutional feasibility is not our job. Would we not treat a heart attack simply because it is happening in the president? Our job is to meet the medical need. Members of Congress who have direct interactions with the president can request an evaluation. They could also request an involuntary fitness-for-duty evaluation. In my view, citizens, who are direct stakeholders, are also appropriate auspices.

Mental health professionals could then order the hold if the situation warrants it based on uniform standards. Given that our last petition drew more than 800 signatories, we could expect a near-consensus. Whether security staff will comply is another concern that will be a decision of their own conscience. The military should take the protocol measures it does when a fellow serviceperson poses a danger. The Congress would do well to draw up additional articles of impeachment on the latest bypassing of constitutional requirements in launching an act of war, which would serve as limit setting that can help prevent future dangers. We each need to do our part, and we should not stop until the danger is removed.

Unless we are conscientious, independent moral agents of our own, we can easily be coopted into the machinery of domination. We should not let what happened to Nazi doctors, who abandoned medical principles to serve power, happen here.

This interview has been lightly edited for clarity and length.
Report typos and corrections to: corrections@rawstory.com.