Fox News’ Chris Wallace busts Dershowitz with clip of his 1998 impeachment argument: ‘Exactly the opposite of what you’re arguing today’ 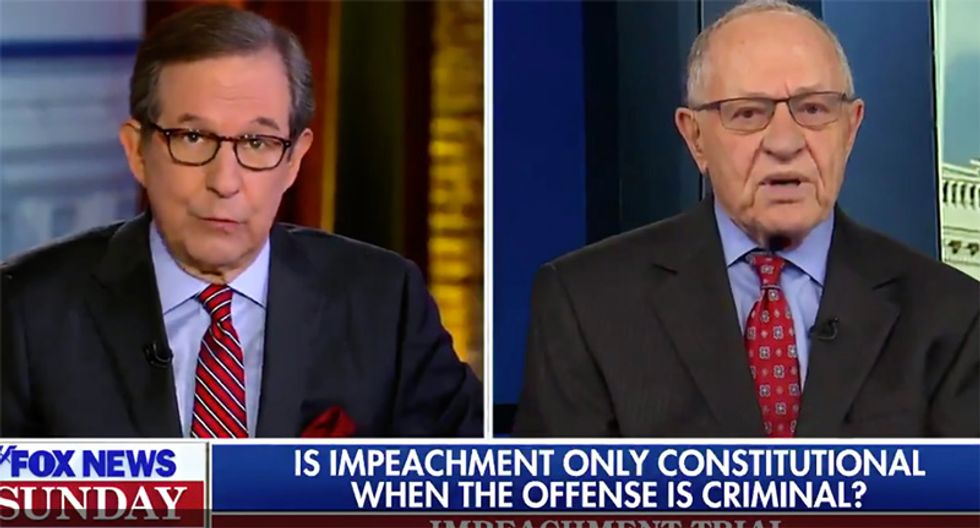 “I want to talk about the framers, because you keep bringing them up,” Wallace began. “In Federalist 65, Alexander Hamilton argues that a criminal offense is not essential to impeachment.”

Explaining that founder George Mason was concerned by the conduct of a “former British official in India who had been accused of mismanagement,” Wallace told Dershowitz, “Neither of these cases is there any mention of breaking a specific criminal statute.”

“Let’s start with mismanagement,” Dershowitz replied. “Yes, that was a criteria in England and that was rejected by the United States. That was one of the elements that was introduced by the framers and it was rejected.”

“That’s not true,” Wallace shot back. “George Mason was one of the people who came up with ‘high crimes and misdemeanors,’ and he meant to include things like misconduct and abuse of power.”

“I do want to point out that, we want to listen to a couple of people who — you bring up the impeachment trial — who argued exactly the opposite of what you’re arguing today,” Wallace said, rolling footage vintage Dershowitz insisting there “certainly doesn’t have to be a crime” for a president to be impeached.

“Professor Dershowitz, let me ask about this, because when you argue that case … I find it very hard to believe that you had not studied the only other presidential impeachment in history, which was the [Andrew] Johnson impeachment,” Wallace said. “So suddenly discovering that the key issue is what Justice] Curtis argued in 1860, you’re too good a lawyer not to have studied that back in 1998.”

Dershowitz attempted to argue that in 1998, Clinton was charged with a crime, but Wallace zeroed in on the recorded argument. “We just put the sound up … you said it doesn’t have to be a crime.”

“I did say that then,” Dershowitz replied. “And then I’ve done all the extensive research, I’ve been immersing myself in dusty old books and I’ve concluded that no, it has to be a crime. It doesn’t have to be a technical crime.”

The lawyer went on to list other people who’ve changed their views since the Clinton impeachment.

“That’s what scholars do,” Dershowitz claimed.

“It’s also what lawyers do,” Wallace retorted. “Which is depending on the facts of the case and the side they’re arguing, they find an argument to make.”

Watch the full video below, via Fox News: