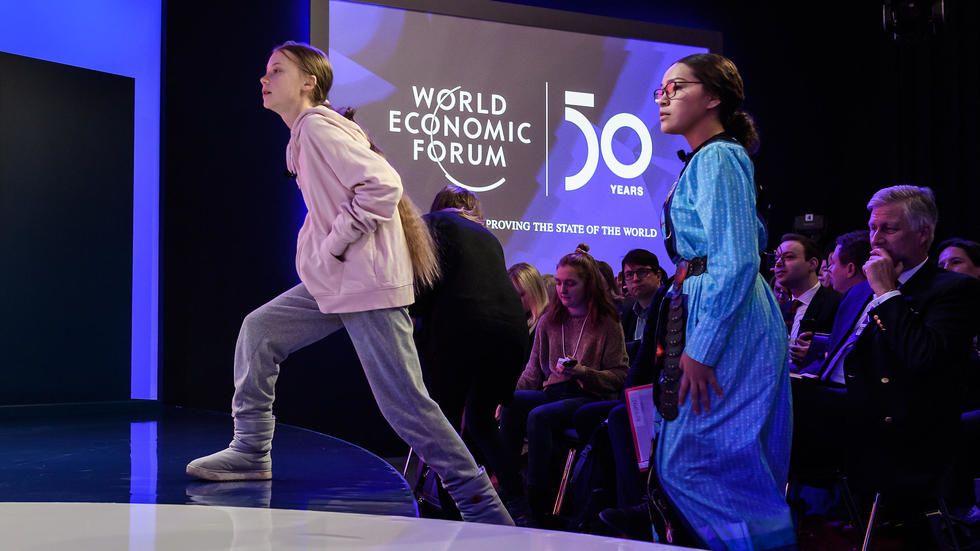 Swedish teen activist Greta Thunberg on Tuesday slammed global inaction on climate change in front of the world's top business leaders, as the annual Davos forum faced up to the perils of global warming while bracing for an address from US President Donald Trump.

The 50th meeting of the World Economic Forum in the Swiss Alps resort got under way seeking to meet head-on the dangers to both the environment and economy from the heating of the planet.

Trump, who has repeatedly expressed scepticism about climate change, is set to give the first keynote address of Davos 2020 on Tuesday morning, on the same day as his impeachment trial opens at the Senate in Washington.

But before his appearance, Thunberg underlined the message that has inspired millions around the world -- that governments are failing to wake up to the reality of climate change.

"We are all fighting for the environment and climate. If you see it from a bigger perspective, basically nothing has been done. It will require much more than this. This is just the very beginning," she said.

Speaking calmly and with a wry smile, Thunberg acknowledged that her campaign which began with school strikes had attracted huge attention without yet achieving change.

"There is a difference between being heard to actually leading to something," she said.

"I am not the person who should complain about not being heard," she said to appreciative laughter.

"I am being heard all the time. But the science and the voice of the young people are not at the centre of the conversation," she added.

The forum's own Global Risks report published last week warned that "climate change is striking harder and more rapidly than many expected" with global temperatures on track to increase by at least three degrees Celsius (5.4 degrees Fahrenheit) towards the end of the century.

There are no expectations that Trump and Thunberg, who have exchanged barbs through Twitter, will actually meet, but the crowded venue and intense schedule mean a chance encounter cannot be ruled out.

When Trump and his entourage walked through UN headquarters last year at the annual General Assembly, a photo of the teenager staring in apparent fury at the president from the sidelines went viral.

Tweeting as he headed to Davos, Trump appeared in bullish mood, writing he would "bring Good Policy and additional Hundreds of Billions of Dollars back to the United States of America!"

"We are now NUMBER ONE in the Universe, by FAR!! he added.

Sustainability is the buzzword at the forum, which began in 1971, with heel crampons handed out to participants to encourage them to walk on the icy streets rather than use cars, and the signage paint made out of seaweed.

Trump's opposition to renewable energy, his withdrawal from the Paris climate accord negotiated under his predecessor Barack Obama, and the free hand extended to the fossil fuel industry puts him at odds with the entire thrust of the event.

Business leaders attending the forum will be keen to tout their awareness on climate change but are likely also to be concerned by the state of the global economy whose prospects, according to the IMF, have improved but remain brittle.

"We are already seeing some tentative signs of stabilisation but we have not reached a turning point yet," said IMF chief Kristalina Georgieva.

Greenpeace meanwhile complained that some of the world's biggest banks, insurers and pension funds have collectively invested $1.4 trillion in fossil fuel companies since the Paris climate deal.

"I am angry about the state of the world but I am also determined to engage and provide solutions and deliver," WWF director general Marco Lambertini told AFP. "There needs to be healthy balance between these two sentiments."