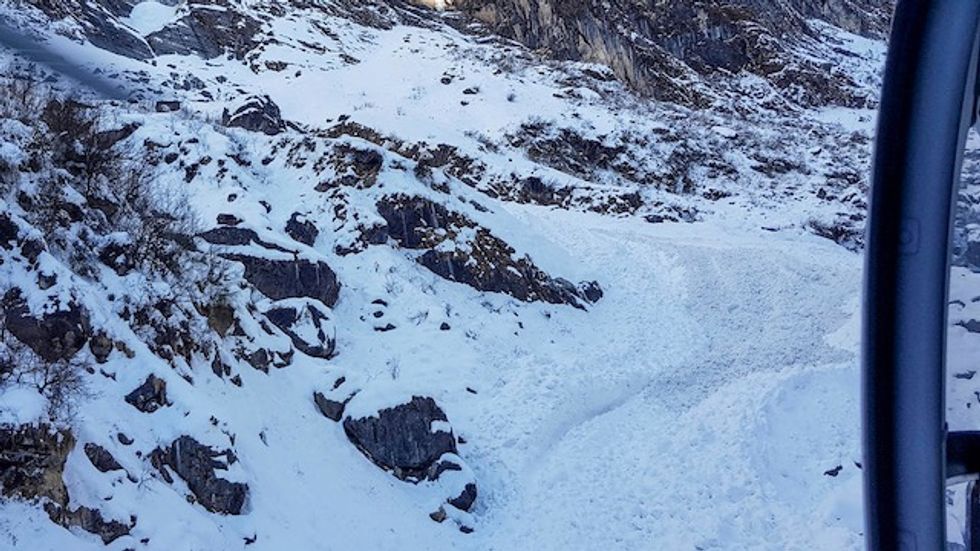 Rescuers intensified an increasingly desperate hunt Monday for four South Korean trekkers and three Nepalis swept away by an avalanche in the Himalayas as a guide told how he saw people carried off by the snow.

Krishna Hari Subedi was helping a Chinese trekker on the trail near the Annapurna base camp when the wall of snow hit on Friday.

"We were descending when an avalanche came rumbling down. Three people were swept down by it in front of my eyes," Subedi told AFP.

"I ducked down and my guest followed, we were safe. If we had moved forward, there was a cliff edge, we would have been swept down."

Subedi said he saw three people carried away but did not know how many others had been hit in the line of trekkers on the route.

"When we began heading down again, we heard a cry for help," he added.

"One of them survived and was walking up. It was nearly 300 metres down. When he saw us, he fainted... he was taken to a hospital."

The fate of the other two remains uncertain.

Soldiers have joined a team using drones and helicopters and digging in deep snow at 3,230 metres (10,600 feet) where the avalanche struck.

Small helicopters were being used to drop rescuers at the site, Shanta Bir Lama, president of the Nepal Mountaineering Association, told AFP.

"The narrowness of the area makes the search difficult," explained Lama.

"There is also a lot of snow. But teams today will try to remove the snow and search. Devices are also being used," he added.

A nine-member army team has joined the operation while the South Korean embassy also sent an official to assist.

"The snow from the avalanche is piled four to five metres (13 to 16 feet) deep at the site. No signs of the missing have been reported as of Monday," an official of the South’s foreign ministry said.

Experts say there is a very low chance of survival for those buried in an avalanche for more than two hours.

Relatives of the missing Koreans who arrived in Kathmandu on Saturday have also visited the avalanche area.

Six of the missing were part of the same expedition, while one Nepali porter was escorting a different group.

The four foreigners -- two men and two women -- were part of an 11-member South Korean team. Others have safely descended.

Education officials in Seoul said they were part of a team of volunteer teachers working with children in Nepal.

Helicopters were sent out on Saturday to rescue about 200 people stranded around Annapurna and other nearby mountains after the avalanche.

Annapurna is an avalanche-prone and technically difficult mountain range with a higher death rate than Everest, the world's highest peak.

Thousands of trekkers visit the route every year for its stunning views of the Himalayas.

A snowstorm killed about 40 people on the circuit in 2014, in one of the biggest trekking tragedies to hit Nepal.

What is causing record floods and heatwaves in China?

Record floods in southern China this month displaced more than half a million people, while searing heat buckled roads in other parts of the country.

Authorities have issued extreme weather warnings in multiple regions, while experts warned that these phenomena were more evidence of the impact of climate change.

At a farm in northern Ukraine, a spooked-looking heifer has been limping since one of her hind legs was shredded by shrapnel in a Russian attack that has been mirrored on farms across the country since the war began.

The four-month-old survived bombardments that killed around a third of animals on the meat and dairy facility in Mala Rogan, a village around 25 kilometers (15 miles) south of Ukraine's second city Kharkiv.