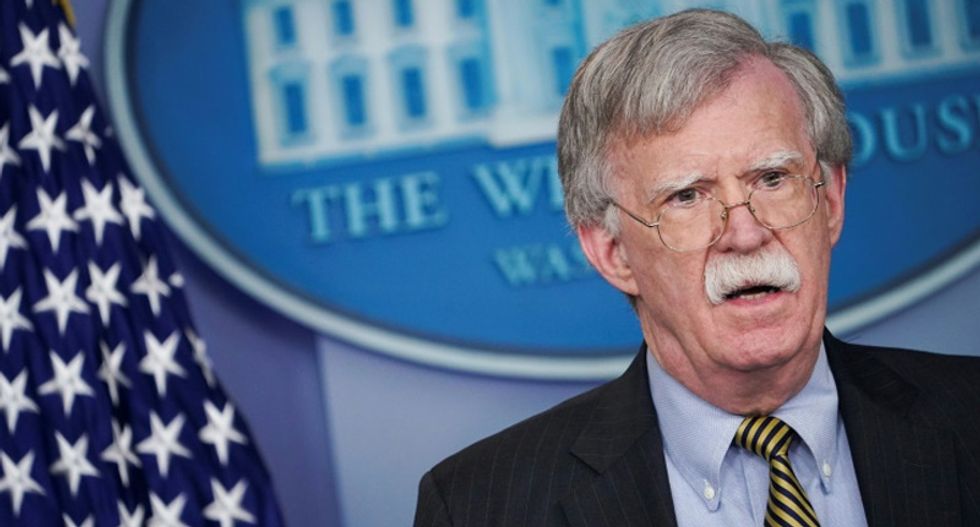 As the U.S. Senate continues to debate the possibility of witnesses in the impeachment trial of President Donald Trump Thursday, two prominent experts are making the case that Democrats should allow testimony from former Vice President Joe Biden's son Hunter Biden in exchange for compelling Trump's former National Security Adviser John Bolton to speak under oath about what he knows.

American political reporter and author Elizabeth Drew, who covered and published a book about Watergate, wrote in an op-ed for the New York Times Wednesday that Senate Democrats trading Hunter Biden, who sat on the board of Ukrainian energy company Burisma, for Bolton "might well be highly valuable—for the country."

"For some time, I was against the Democrats' offering any Biden as a witness in Mr. Trump's trial, on principle," she explained. "Just because the Republicans want to batter Hunter Biden is no reason to submit either him or his father as fodder to hostile Republicans. But principle can be turned on its head; calling Hunter Biden could backfire on the Republicans big time."

Although critics have suggested that Hunter Biden sitting on Burisma's board while his father was in charge of Ukraine policy for Trump's predecessor created at least the appearance of a conflict of interest, no evidence has emerged suggesting that either Biden engaged in any wrongdoing in their separate dealings with Ukraine. Drew argued that "having [Hunter Biden] appear as a witness could expose the fatuity of the Republicans' efforts to smear him and his father."

"An appearance by Hunter before Senate questioners now could also go some distance toward removing him as an issue in the general election, should his father be the Democratic nominee," Drew continued. "In fact, Hunter could be the star witness as to why a president's (or vice president's) offspring should stay out of any business that might have something to do with their parents' job."

Drew also detailed the various benefits of Bolton testifying, arguing that it would undermine Senate Republicans' plans to vote to acquit the president this week; Bolton could challenge claims by the White House and GOP senators that there is no direct evidence of Trump personally tying a freeze of military aid for Ukraine to the country announcing a corruption probe of the Bidens; and "the longer the trial drags on the greater opportunity there is for more damaging information to arrive on the Democrats' doorstep."

"John Bolton might have answers. Democrats should strike a deal, even an implicit one, to get him on the witness stand," Drew concluded. In a Thursday op-ed for Common Dreams, Alan Hirsch—chair of the Justice and Law Studies program at Williams College and author of Impeaching the President: Past, Present, Future—made a similar argument.

"Democrats should reconsider their resistance to the proposed swap, for two related reasons," Hirsch wrote. "First, while Republicans may propose the deal solely for political advantage, it would likely backfire on them. Second, Hunter Biden's testimony is potentially relevant to the charge that Trump abused power."

Considering the consequences of the younger Biden testifying, Hirsch added: "What's the worst that can happen? Quite likely we will 'learn' what we already know: Hunter Biden was indeed hired with the hope that his presence on Burisma's board would help the company politically. Maybe Trump's impeachment trial isn't the ideal place to air the truth about nepotism and influence-peddling, but if that's a collateral benefit of this trial, so be it. And I'm hardly convinced that exposing these untoward practices will ultimately help the president; he is the last person who should throw stones from a White House he has turned into a Glass House of Nepotism."

"Granted, horse trading is not the usual way to determine what witnesses get called in a trial. But this is not a normal trial," wrote Hirsch. "A trial before the Senate necessarily involves a degree of politics, and Democrats should not unilaterally ignore political considerations. But we have no idea how the politics of this all will play out. We do know that Hunter Biden is a potentially relevant witness. John Bolton certainly is. Bring them on."

House Democrats last month impeached Trump, charging him with obstruction of Congress and abuse of power. Those charges were based on testimony from diplomats and others that Trump withheld military aid from Ukraine in an effort to pressure the country's president to announce a corruption probe into Hunter Biden and his father, a Democratic rival of Trump's in the 2020 presidential race.

The Times reported late Sunday that a forthcoming book by Bolton was sent to the White House to be reviewed for classified information. According to the Times, Trump told Bolton in August that he wanted to continue freezing the aid to Ukraine until the country helped launch an investigation into the Bidens, undercutting the president's impeachment defense that the aid freeze was separate from any potential probe.

The Republican-controlled Senate on Wednesday began a two-day question-and-answer session with House impeachment managers and Trump's defense team, and is expected to vote Friday on whether to call any witnesses. While Democrats and the public have long demanded a fair trial in the upper chamber that includes witnesses, the revelation from Bolton's book has increased pressure for him to testify.

GOP Senate Majority Leader Mitch McConnell (Ky.) allegedly said in a closed-door meeting Tuesday that he didn't yet have the votes to block new witnesses and documents, but the Times reported late Thursday that "for Republicans, it appeared as if they were on the verge of giving Mr. Trump what he has wanted all along: an acquittal that he could boast about on the campaign trail."