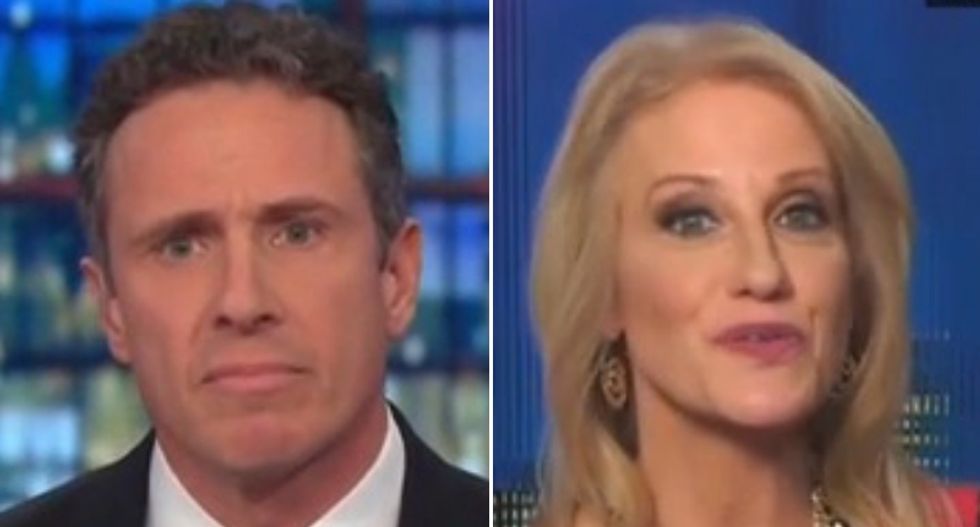 On CNN Wednesday, Chris Cuomo tried to fact-check White House counselor Kellyanne Conway — and the exchange melted down as she began shouting over him.

"These articles of impeachment are thin, they are specious," said Conway. "They've been presented to the Senate and we respect the process in the Senate. The trial process will be much more familiar to Americans who know what a trial is."

"Let's go one step at a time, Kellyanne," said Cuomo. "Not to get in the weeds of the past, because we need to focus on the present, but the way this went down, other than the fact that the House did the fact-finding, not a completely secret task force, as was the case for Clinton, as was the case for Nixon, the House did it. When it came to what kind of rights and access the White House had, it was the same as Clinton had once it reached the House Judiciary."

"Christopher, you invited me on the show tonight and there's got to be a question lurking in there," complained Conway. "First of all, it is not the deep past would happen in the House. The House rushed through the impeachment process, they didn't do their job fully and completely. And then they sat on the—"

"They weren't allowed because you hid witnesses and documents and even this information from [Lev] Parnas," said Cuomo. "They had to wait for federal prosecutors under the jurisdiction of this president's DOJ to release Parnas to give it."

The exchange soon broke down, as Conway began to shout more insistently.

"The Democrats wanted to get rid of Donald Trump," said Conway. "Here's how y'all have been trying to do it. First, you're going to overturn the results of the election and find the electors, the 70,000 votes in the three states. Then they're going to — he's not going to like D.C., he's going to want to go back to New York. That was weird—"

"This is all nonsense. What I'm talking about is wrongdoing." said Cuomo.

"Two years, recession — no, you're embarrassed because you pushed that for years. Then it's recession, then it's Ukraine. Collusion, you pushed it for two years," continued Conway. "I was his campaign manager. I was on CNN every day telling you how we would win, so I would never have talked to a Russian. We didn't need the Russians."

"You didn't. Others did," said Cuomo. "You've got a guy looking at jail time right now. You've got — too dumb to know they shouldn't have done it. They were doing dumb things."

"So you're going back to Russia collusion," said Conway.

"You brought it up!" said Cuomo.

Conway also denied knowing Parnas, who appeared in this photo with her.