'Like watching someone get worked up over a dog show': Internet mocks 'corrupt' Pam Bondi trying to impeach the Bidens 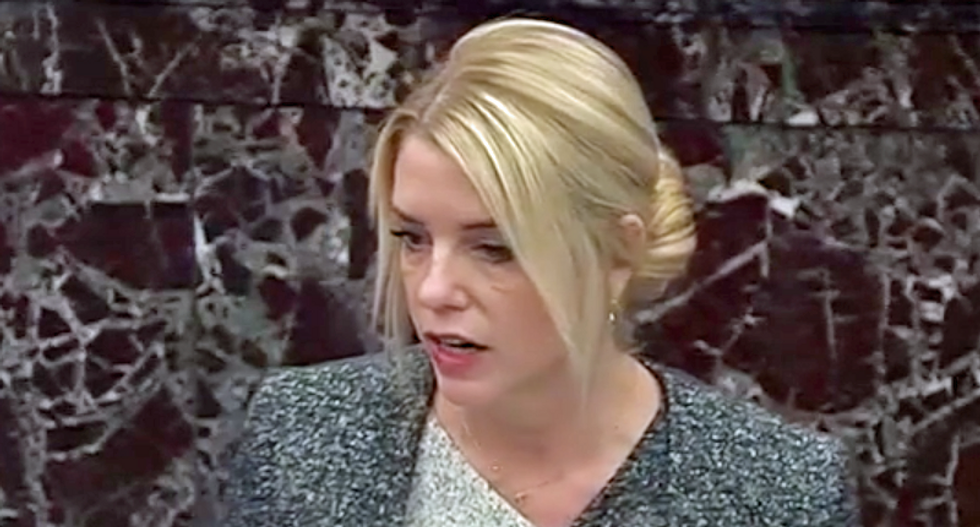 President Donald Trump's legal team brought up Pam Bondi at the end of the first day, where she proclaimed that the Republicans didn't want to have to address Joe Biden, but they're now forced to because the House brought it up. It was a hilarious claim since it has been the Republican's excuse for Trump breaking the law to begin with.

Bondi was criticized for basically doing what Ukraine refused -- smear the Biden family and put them on trial. But as one professor and legal analyst pointed out, if what the Bidens had done was illegal, Attorney General Bill Barr would have prosecuted them. It's been nearly four years and he still hasn't.

Bondy then went on to attack "nepotism," claiming that Biden's son working for a company in Ukraine wasn't above board. The web couldn't help but notice the hypocrisy of the statement, given Trump's own children work in the White House, are employed by his campaign and the Republican Party and many conservative groups who bought Trump's son's book to donate to their donors.

Pam Bondi has thus far outlined how Hunter Biden benefited from nepotism in defense of a president who has employed… https://t.co/fsOqwxKtYs
— Jacqueline Alemany (@Jacqueline Alemany) 1580162389.0

As Pam Bondi regales the Senate with the tales of Barisma and Hunter Biden (ironic she would raise the spectre of "… https://t.co/IhzcO5cKdl
— Michael Steele (@Michael Steele) 1580162392.0

The irony of Pam Bondi invoking nepotism as a defense. What about Jared and Ivanka? What qualifications do they ha… https://t.co/OIi2ZZRbLG
— Curly Chrys (@Curly Chrys) 1580162094.0

It's for this reason, some wondered if Bondi instead thought she was supposed to impeach the Bidens instead of defending the president.

Others couldn't help but recall the $25,000 bribe that Bondi took from Trump's foundation so she would drop Florida out of the lawsuit against Trump University. That donation ultimately got Trump into trouble and his charity was forced to close down and pay a hefty fine.

Bondi also was caught making double with Biden's son was from Qatar.

Funny Pam Bondi not mentioning she was making twice as much per month as Hunter from Qatar for no apparent reason.… https://t.co/pxlWiAkz4c
— Craig Crawford (@Craig Crawford) 1580162537.0

You can see the rest of the responses below:

We’ve now reached the point in impeachment where the president’s lawyers are playing his campaign ads against Biden.
— Joyce Alene (@Joyce Alene) 1580161721.0

Also a little something that #PamBondi left out — what @AshaRangappa_ said.👇 Why did the President of the United S… https://t.co/crQsabWiGX
— Ryan Goodman (@Ryan Goodman) 1580163517.0

Pam Bondi chastising people about corruption is like Jeffrey Dahmer giving a speech on the dangers of cannibalism.
— Adam Best (@Adam Best) 1580162310.0

Getting Pam Bondi to speak about corrupt prosecutors is like asking Ken Starr to speak on cheapening the impeachmen… https://t.co/Sn1kXImweg
— LOLGOP (@LOLGOP) 1580161165.0

if only Pam Bondi had put this much energy into investigating #TrumpUniversity ... https://t.co/TW0nTAEHVn
— Christine Pelosi (@Christine Pelosi) 1580161471.0

Escape from TrumpWorld: Former aide says many Republicans want to ditch fascism — but the damage may take decades to heal

Miles Taylor was chief of staff to former Homeland Security Secretary Kirstjen Nielsen during the Trump administration. Under the name "Anonymous," Taylor published the widely discussed 2018 New York Times op-ed "I Am Part of the Resistance Inside the Trump Administration."

In that article, Taylor attempted to assure those Americans horrified by the Trump regime that there were true patriots at the highest levels of the administration avidly trying to rein in the president's worst instincts, and by doing so to rescue the country and the world from calamity.

It’s been nearly two months since the Texas Board of Pardons and Paroles, in a surprising, unanimous decision, recommended that George Floyd be pardoned for a problematic 2004 drug conviction in Houston. Gov. Greg Abbott, who has the final say, has been sitting on the recommendation without public comment since.

For those hoping the pardon will be granted, the governor’s silence has been deafening.

Notre-Dame in Paris denies redesign is too radical

Plans to replace the gothic ambience of Notre Dame cathedral with a softer vibe of modern art and warm lighting have raised a few eyebrows, but the priest in charge denies any radical transformation is afoot.

With the cathedral set to reopen in 2024 -- five years after a fire devastated much of its roof and spire -- church authorities are putting forward new plans on December 9 for how the public will experience the iconic Parisian landmark.