Lindsey Graham screeches at reporters over impeachment: Trump 'did nothing wrong in his mind' 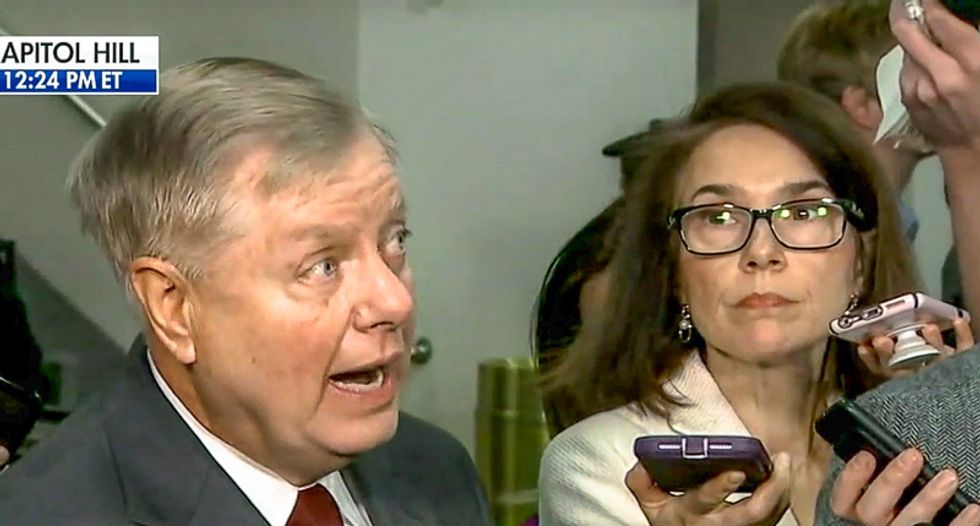 Sen. Lindsey Graham (R-SC), a close ally of President Donald Trump, on Thursday complained that the president's impeachment trial should end quickly because the American people "need a break."

"I love Joe Biden but I can tell you if the name was Trump, there would be a lot of questions asked," Graham said moments before House managers were expected to argue for the impeachment of President Donald Trump. "I want the public to understand, the claim Democrats are making -- there's no there there."

According to Graham, if Trump "thought he was doing something wrong, he would probably shut up about it."

"The president believes that the Ukraine interfered in out election," Graham continued. "I can tell you without any doubt it was the Russians who hacked into the DNC. It was not the Ukrainians. I cannot say that there was nobody in the Ukraine that had worked with [Trump campaign chair Paul Manafort] that did a number on him. I don't know."

"All I can tell you is from the president's point of view, he did nothing wrong in his mind," the South Carolina Republican insisted.

When it came to calling Joe and Hunter Biden as witnesses, Graham said that he preferred to "end this thing sooner rather than later."

"I want the American people to pick the next president, not me," he added. "And so I think the best thing to happen is to have oversight of Ukrainian potential misconduct and move on to the election. I am not going to use my vote to extend the trial."

"The country needs a break from this," Graham said. "If you think there's a whistleblower problem, we can deal with that outside impeachment."