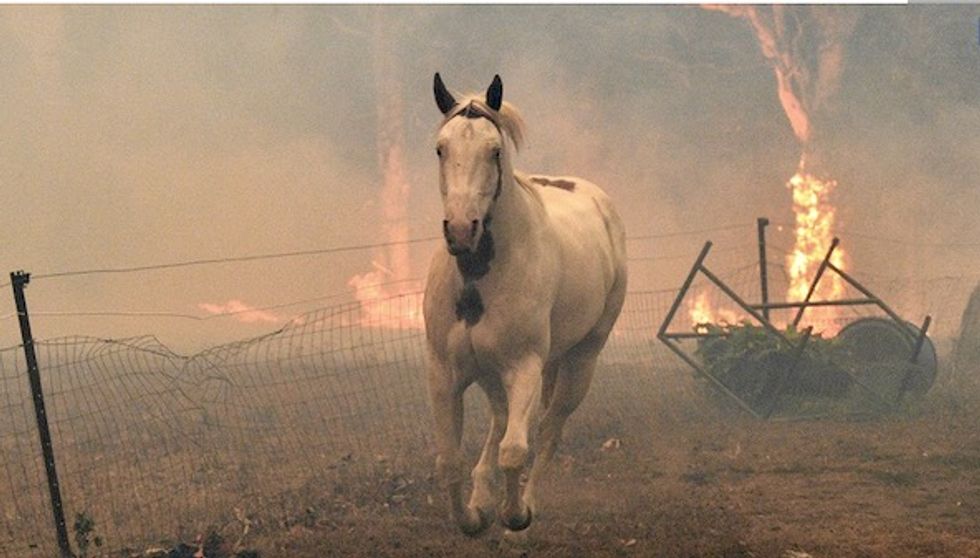 A horse attempts to move away from nearby bushfires Photo: Saeed Khan/AFP

As Australia's catastrophic wildfires rage on with no end in sight, University of Sydney ecologist Chris Dickman said the number of animals killed in the blazes has topped one billion—a horrifying figure that the scientist described as a "very conservative" estimate.

Dickman told HuffPost late Monday that the original estimate of nearly 500 million animals killed was based solely on figures from the state of New South Wales (NSW) and excluded groups of animals that have been devastated by the wildfires, which have scorched 18 million acres of land, destroyed thousands of homes, and killed at least 25 people.

"It's our climate impact and our obsession with coal that is helping wage war on our own country."

"The original figure—the 480 million—was based on mammals, birds, and reptiles for which we do have densities, and that figure now is a little bit out of date," Dickman said. "It's over 800 million given the extent of the fires now—in New South Wales alone."

When animals such as bats, frogs, and invertebrates are included in the total, Dickman said, "without any doubt at all" the death toll has exceeded a billion.

"Over a billion would be a very conservative figure," the ecologist said.

Stuart Blanch, scientist with World Wildlife Fund Australia, agreed with Dickman's assessment of over a billion animals lost to the fires.

"It's our climate impact and our obsession with coal that is helping wage war on our own country," Blanch said in an interview with HuffPost.

Ecologists at the University of Sydney and WWF Australia estimate that a billion animals has died in Australia’s bu… https://t.co/GjG1qevPPO
— Greta Thunberg (@Greta Thunberg) 1578393275.0

The unprecedented fires across Australia, fueled by record heat driven by the global climate crisis, have put several endangered species in Australia at risk of total extinction.

Janine Green, a volunteer at WIRES Wildlife Rescue, told CNN Tuesday that it will be extremely difficult for animal populations to recover in the aftermath of the fires.

"They're not coping, and now they've got no grass, no water, no habitat," Green said. "Who knows if they can breed after this? We've never seen anything like this before."

‘Striking’ how close Georgia election investigation is getting to Trump: legal expert

As CNN points out, several state officials have already been subpoenaed and have appeared before the special grand jury led by Fulton County District Attorney Fani Willis.

WASHINGTON, D.C. — Now that Roe v. Wade is nullified – along with the reproductive rights it enshrined for women – progressives are increasing pressure on Democratic Party leaders to rip up their old playbook. They say two things are clear: 1. Roe was ripped away on their watch, and 2. they have no concrete plan to reinstate it.

A case in point, to increasingly restive progressives, is that even after the Roe decision was leaked back in May, Democratic Party leaders continued to support anti-abortion Texas incumbent Rep. Henry Cuellar over his progressive challenger Jessica Cisneros. That runoff divided establishment Democrats from the party’s growing ranks of progressives, many of whom are inspired and supported by Rep. Alexandria Ocasio-Cortez (D-NY).

Two men charged with plotting to kidnap Gov. Gretchen Whitmer have been called in for another trial after a trial in April ended with a split jury decision.

Judge Robert Jonker ordered Thursday that Adam Fox, 39, and Barry Croft, 46, will stand before another jury to “weigh the evidence.”