Nancy Pelosi could get the 'last laugh' during Trump's impeachment trial: conservative columnist 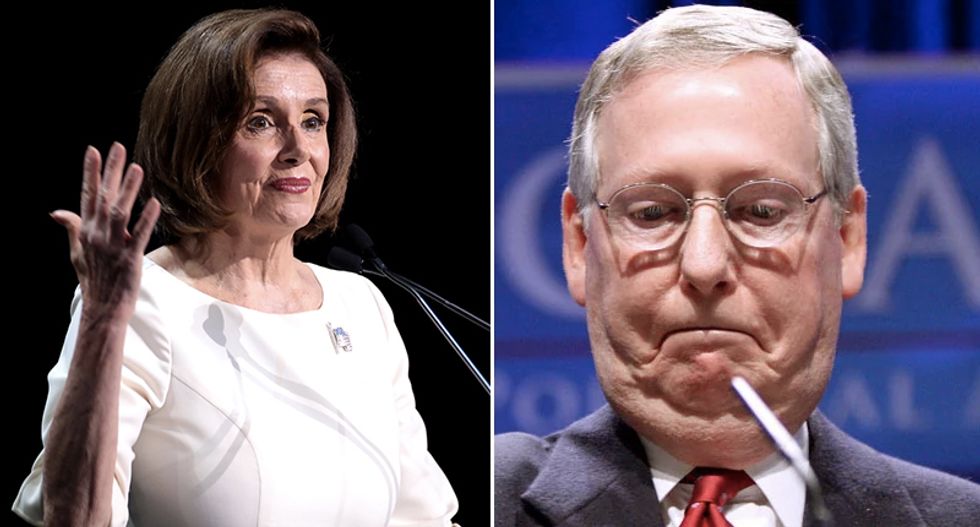 On Tuesday, Never Trump conservative columnist Jennifer Rubin wrote for the Washington Post that while House Speaker Nancy Pelosi (D-CA) may not have gotten a hard guarantee of witnesses at the impeachment trial by withholding the articles, she managed to put Republicans on the defensive — and that could ultimately get her the "last laugh" in opening the Senate trial to new evidence.

"Some voices in the punditocracy have insisted that House Speaker Nancy Pelosi (D-Calif.) 'lost' in finally agreeing to send the articles of impeachment against President Trump to the Senate," wrote Rubin. "Pelosi has responded that the delay resulted in a bunch of information coming to light, former national security adviser John Bolton’s announcement that he would testify if subpoenaed and the shoring up of public support for witnesses. With polling showing that the public overwhelming wants to hear from Bolton (two-thirds support it, including more than 70 percent of independents, according to a Quinnipiac poll released Monday) and a new report suggesting major defections on the Republican side, Pelosi may get the last laugh."

Rubin noted that Sen. Mitt Romney (R-UT) has said he will vote for witnesses, the White House and Senate GOP are more fractured than ever on their strategy for the impeachment trial, and the group Republicans for the Rule of Law is now running ads that put vulnerable GOP senators in the hot seat.

"Now, it is possible that potential Republican defectors have searched their souls, decided in good conscience that they need to conduct a fair trial and have grown spines to stand up to Trump and his cohort, Senate Majority Leader Mitch McConnell (R-Ky.)" wrote Rubin. "On the other hand, Republicans with rotten poll numbers may have spent the last few weeks testing public sentiment, only to discover it is politically untenable for them to aid in the Trump coverup. If that is the case, Pelosi should take a victory lap."

"We have yet to see whether a sufficient number of Republicans do demand a real trial rather than a sham. If so, it would be a major step in reestablishing checks and balances, as well as the stature of the Senate," concluded Rubin. "Let’s hope those Republican senators come through."