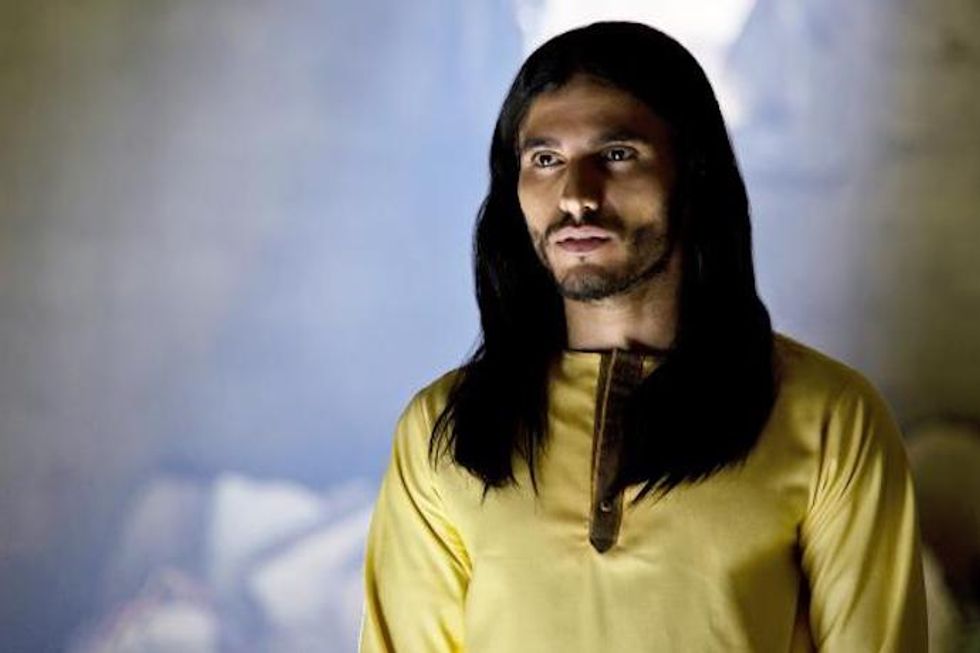 Amid horrific natural disasters and a global refugee crisis, an Iranian menace emerges. This might summarize the news cycle at the start of 2020, but it’s also the premise of Netflix’s controversial new series Messiah. Critics have blasted the series for its slow pace, meandering and inchoate storylines, and lack of a clear theological or political message. Beyond its post-truth smokescreen (it’s unclear whether the central character is the Messiah, the Antichrist, or a con-man), however, the show advances a clear and dangerous geopolitical narrative that panders to the Christian Right: America must team up with Israel to defeat Iranian terrorists whose influence permeates the Middle East.

Messiah tells the story of a mysterious messianic figure called Al-Masih (Arabic for “the Messiah”), who garners international attention when he attempts to bring thousands of Palestinians in Syria across the border into Israel. The CIA and Israeli intelligence tail him, first in Israel and then in Texas, trying to expose him as a fraud. All the while, he attracts masses of followers by performing apparent miracles that he might not actually be responsible for or which turn out to have been ineffective.

The CIA team discovers that Payam Golshiri, dubbed Al-Masih, learned how to be a magician and con-man from his uncle while growing up in Iran, became allied with an anti-capitalist political theorist during a semester at Williams College (one of America’s leading liberal arts colleges), and through this “terrorist” professor established ties to Russia. By the final episode, Golshiri is recognized as a fraud and terrorist, causing his followers to abandon their faith. But then the season ends with him surviving a plane crash and apparently raising other passengers from the dead. (Cue season 2 chatter.)

If Golshiri does indeed have superpowers but is also deceptive, he fits the profile of the Antichrist who will come before the world ends, or “the deceiving messiah” known as Al-Masih ad-Dajjal in Islamic traditions. The show’s depiction of Golshiri as a Russian operative qua Antichrist is not reliant on Muslim traditions. It is, however, indebted to right-wing Christian apocalyptic fantasies.

Mass-market Christian end-times fantasies have often followed the path paved by Hal Lindsey, whose best-selling The Late Great Planet Earth in 1970 interpreted a pastiche of biblical verses as proof that the end would begin with a Soviet invasion of Israel. He claimed that the ancient prophet Ezekiel’s warning about Israel being invaded by an enemy named Gog from the North must refer to modern Russia. Even more, this northern enemy could not succeed without the help of Iran, which Lindsey equated with a reference to Persia.

Since 9/11, Armageddon-anxious evangelicals have focused more on Russia’s Middle Eastern allies than Gog itself. Tim LaHaye, co-author of the best-selling Left Behind series, and Ed Hindson, Dean Emeritus of the divinity school at Liberty University, devoted much of their 2007 book Global Warning to framing Iran as an evil Islamic threat to Israel, and through Israel to Christianity. Like other evangelical apocalypticists such as Joel Rosenberg (author of The Twelfth Imam series), LaHaye and Hindson cast the Iranian government’s targeting of Israel as proof that the end is near. They contend that Iran is the mastermind attempting to usher in the end-times by establishing a new global caliphate with its capital in Jerusalem. The book leaves readers with the Christian Zionist idea that American Christians must protect the state of Israel, the Jewish Promised Land, from Muslims in order to secure their own salvation.

The slippage between geopolitical entities and monolithic religious groups in this apocalyptic media, whereby America represents Christians, Israel stands in for Jews, and Iran is a cipher for Muslims, has significant political purchase among America’s Christian Right. Reportedly, George W. Bush appealed to the Gog prophecy to justify going to war in Iraq, while the Trump administration’s relocation of the U.S. embassy to Jerusalem satisfied right-wing evangelicals’ desires to safeguard the platform of their impending rapture.

The speeches surrounding the move appealed to biblical prophecies as filtered through the lens of modern apocalyptic fantasies. In his speech before the Israeli Knesset about moving the embassy, Vice President Pence—whom a Haaretz reporter labeled the “Horseman of Trumpacolypse”—drew on scriptural texts to justify Israel’s claim to Jerusalem, implying that Jewish sovereignty over Jerusalem is a prerequisite for the extension of God’s promises to Jews to Gentiles—that is, Christians. He called out Iran’s “evil regime” as a threat to this Jewish-Christian union. The notorious Christian Zionist pastor John Hagee soon after affirmed Pence’s sentiment in his prayer at the embassy’s dedication, saying:

“[L]et every Islamic terrorist hear this message: Israel lives. …Let it echo down the marble halls of the presidential palace in Iran: Israel lives.”

Even the Trump administration’s ruthless campaign against the congressional “Squad” reeks of apocalyptic conspiracy theories. A day after the world learned about Trump’s assassination of the Iranian Major General Qasem Soleimani, Trump rallied his evangelical supporters around a pro-Israel, anti-Iran agenda. He justified his attack on Soleimani as defensive, because the General “was planning a very major attack …[and] as president, I will never hesitate to defend the safety of the American people.”

In the same speech, he repeated his frequent claim that any opposition to Israel’s treatment of Palestinians is akin to anti-semitism. “Where do these people come from?” he queried, ever so rhetorically, about Representatives Alexandria Ocasio-Cortez, Rashida Tlaib, and Ilhan Omar. “These people hate Israel. They hate Jewish people.” Trump wants his evangelical base to believe that support for Israel, an evangelical priority, is part and parcel of opposition to Iran—not to mention opposition to progressive Muslims like Tlaib and Omar.

Netflix’s Messiah fashions a puzzling drama on the foundation of this problematic apocalyptic narrative about Middle Eastern geopolitics. There can be little doubt that the show’s producers, Mark Burnett and Roma Downey, were aware of this, as they call themselves “Hollywood’s noisiest Christians.” They have produced Christian shows, like The Bible and A.D. The Bible Continues, and are raising millions of dollars to start a conservative Christian network through MGM. As the producer of The Apprentice, Burnett is the architect of Trump’s celebrity and is presently planning a new show with the president. Messiah’s creator, Michael Petroni, also has a record of working on Christian programs like Miracles, The Rite, and the third installment of C.S. Lewis’s Chronicles of Narnia.

Messiah is thus a series written by Christians for Christians. A Christian Post author even described it as “packed with several solid teachings and the resounding idea that sin brings punishment.” The only clear (but by no means “solid”) teaching this viewer could detect is that any Arab or Middle Easterner might be a terrorist, whether they are an adherent of ISIS or a new-agey faith like Golshiri’s.

It’s also worth noting that Golshiri’s message, presented as duping so many Americans, is a caricature of progressive positions: it’s opposed to capitalism, borders, and American military intervention abroad. The season ends with pious Christian families torn apart and a church in flames, all because Americans trusted the false truths of an Arab intruder—they put their faith in globalization instead of nationalist protectionism.

Messiah is essentially a disgraceful reboot of Cold War-era apocalyptic fiction for the xenophobic, post-truth age of Trump. The basic framework of its story reinforces dangerous right-wing prejudices about the role of Iran and Muslims in Christian end-times scenarios. It’s no wonder that Jordan’s Royal Film Commission has banned the series and that petitions have arisen condemning the show as anti-Islamic.

If Netflix renews the show for another season, we shouldn’t be surprised for a moment if the real “Chosen One” tasked with defeating Golshiri turns out to be a stocky, yellow-haired American businessman who builds walls, bans Muslims, and drops drones on Iranian generals.