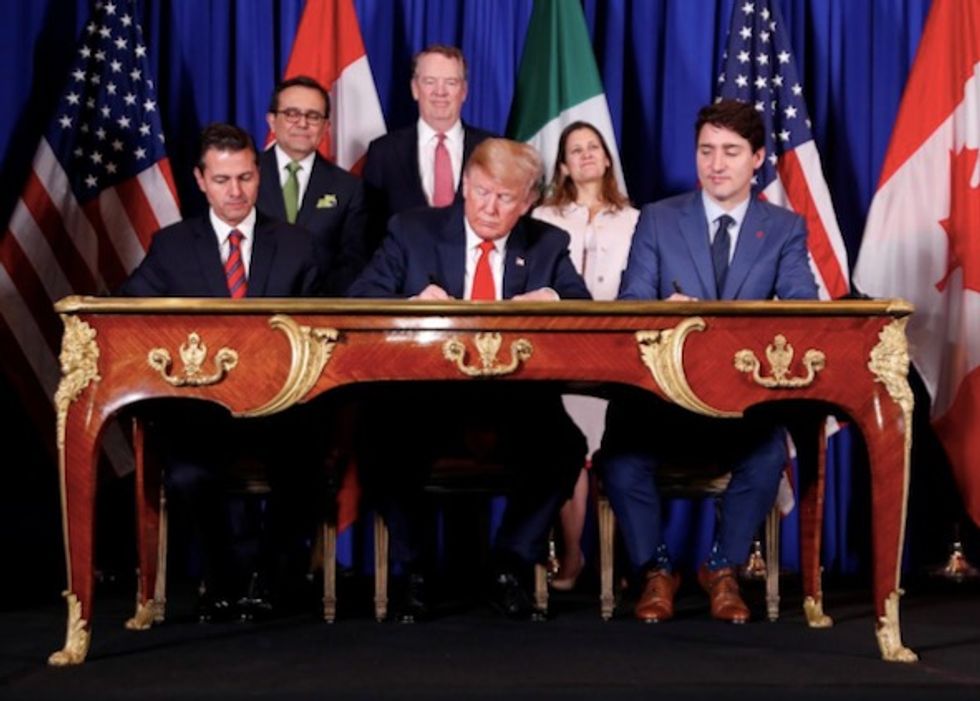 The US Senate was poised to approve a new North American trade pact on Thursday, handing President Donald Trump a second trade win in as many days as he simultaneously faces impeachment.

Lawmakers were expected to vote toward 1600 GMT to approve the US-Mexico-Canada agreement, which the three countries hammered out in more than a year of negotiations.

Adoption of the continent-wide agreement comes less than a day after Washington and Beijing reached a separate partial deal, pausing their trade war and letting US farmers and businesses breathe a sigh of relief.

The USMCA is billed as an update to the 1994 North American Free Trade Agreement, which Trump had long lambasted as a job killer and threatened to scrap outright.

House lawmakers voted last month to adopt the USMCA after winning changes to the text, including stronger guarantees that Mexican labor reforms can be enforced.

Mexican lawmakers adopted those changes last month while Canada has yet to vote on the text, the final step for it to enter into force.

Trump had long blamed NAFTA for the offshoring of American jobs and negotiations for what would become the USCMA began in August of 2017.

Mexican and Canadian officials likewise conceded that the 26-year-old NAFTA, ratified in an era before the rise of digital commerce, was in need of an update.

The new treaty was signed by the three countries in November 2018.

The earlier NAFTA created a vast free-trade zone across North America, leading to radical shifts in the makeup of industries in the three countries and vastly increasing cross-border exchanges in goods, services and people.

While the agreement produced winners and losers in some areas, economists say overall it increased economic growth and raised the standard of living in North America.

Businesses and the agricultural lobby in recent months had urgently pressed lawmakers to advance the treaty and help end trade uncertainty.

US trade with Canada and Mexico supports 12 million American jobs and 49 of 50 US states list Mexico or Canada among their three top export destinations, according to the US Chamber of Commerce.

Canada and Mexico together represent 40 percent of the growth in US goods exports. Trade with those two countries reached $1.4 trillion in 2018.

On approving the text of a law to implement the USMCA, Democrats last month said it would energize the US economy while supporting US workers, protecting the environment and improving access to affordable medications.

Trump aides believed it vindicated the president's maximum pressure strategy, including the use of punitive tariffs to extract concessions.

US Treasury Secretary Steven Mnuchin reiterated Sunday that the agreement and the new China trade agreement would boost US growth in 2020.

Trump is battling for reelection in 10 months but first faces an impeachment trial expected to begin Tuesday.