'No War With Iran' marches set for Thursday across US 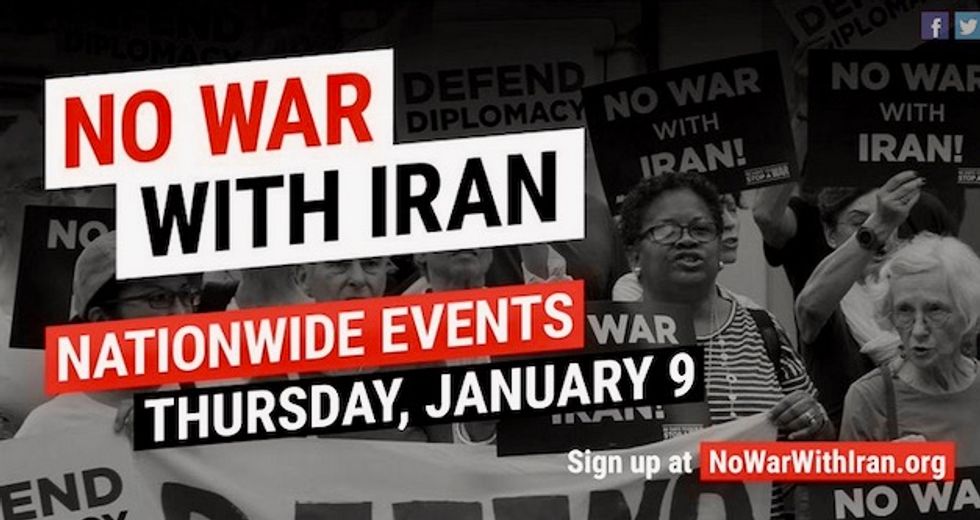 Marches against war with Iran will take place across the U.S. (Image: NoWarWithIran)

In communities nationwide, Americans "will urge restraint and that the United States avoid yet another unnecessary, costly war of choice in the Middle East."

A coalition of progressive groups have announced plans to come together this Thursday to lead marches across the U.S. against President Donald Trump's push to wage war on Iran.

Win Without War, MoveOn, Indivisible, Vets About Face, and the National Iranian-American Council (NIAC) are among the groups leading the demonstrations.

Conflict between Iran and the U.S. reached a new height last week when, on January 3, a drone strike ordered by Trump assassinated Iranian military commander Qasem Soleimani. Iran has vowed to retaliate for the killing of the popular—and powerful—Soleimani, with Iranian Foreign Minister Javad Zarif calling the attack "rogue adventurism."

According to a Tuesday press release from the coalition, Thursday's marches will focus on beating back continuing White House threats to attack Iran.

"In the wake of the Trump administration's reckless assassination of Iranian General Soleimani, and threats to escalate conflict, activists carrying a 'no war' message will urge restraint and that the United States avoid yet another unnecessary, costly war of choice in the Middle East," the group said.

At press time there were 66 marches and demonstrations planned, with more to come.

Find an event near you here.