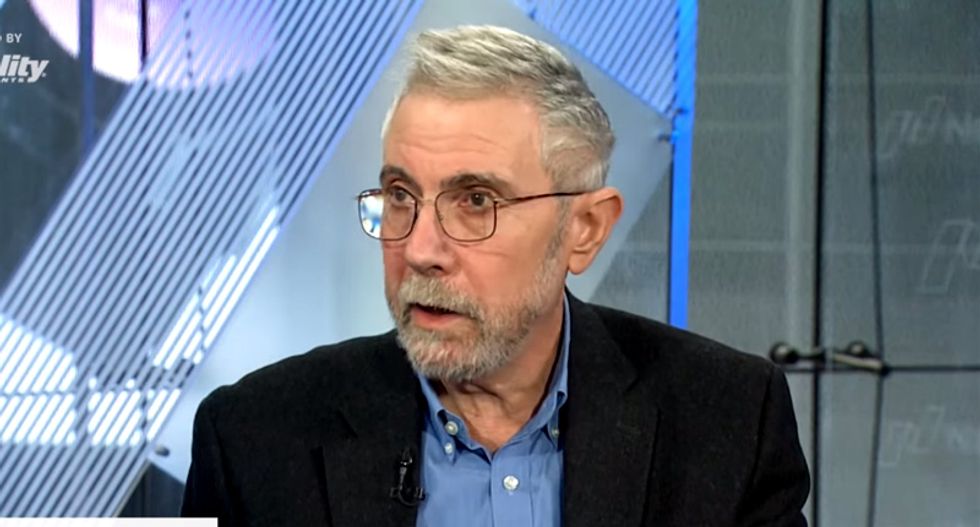 Monday on Twitter, President Donald Trump made the absurd claim that he “was the person who saved” protection for “preexisting conditions in your health care” and declared, “I will always protect your preexisting conditions, the Dems will not.” Economist Paul Krugman, in his New York Times column, denounces Trump’s claim as a bald-faced lie and stresses that if he has his way, millions of Americans who suffer from preexisting health conditions will find themselves without health insurance.

“Trump’s political health care strategy is to flat-out lie about what he has done and is trying to do,” Krugman asserts. “On Monday, he made the breathtakingly dishonest claim that he is ‘the person who saved preexisting conditions’ — breathtaking because he has tried at every stage to remove the protections for Americans with preexisting conditions created by the Affordable Care Act.”

Trump, Krugman adds, “wants to take away your health care, but he doesn’t want you to see him doing it until the election is behind him.”

Krugman stresses that Democrats who have been having heated debates on ways to achieve universal health care in the United States shouldn’t forget that whatever their policy differences, they have something in common: all of them support universal health care, while Trump and other Republicans don’t. And even though Krugman believes that Medicare-for-all can be an admirable long-term goal, he has a problem with Democrats who want to make it a purity test in 2020.

“Democrats running for president have spent a lot of time debating so-called Medicare-for-all, with some supporters of Bernie Sanders claiming that any politician who doesn’t demand immediate implementation of single-payer health care is a corporate tool, or something,” Krugman explains. “But the reality is that whatever its merits, universal, government-provided health insurance isn’t going to happen anytime soon. I say this because even if Democrats take the Senate in addition to the White House, the votes for eliminating private health insurance won’t be there.”

If Trump is reelected in November, Krugman warns, he will do everything he can to end the Affordable Care Act of 2010, a.k.a. Obamacare, and its protections for preexisting health conditions.

“In practice, any of the Democratic candidates — even Sanders — will, if victorious, end up building on and improving Obamacare,” Krugman emphasizes. “On the other hand, if Donald Trump wins, he will probably find a way to kill Obamacare, and tens of millions of Americans will lose health coverage.”

As long as Democrats have a majority in the U.S. House of Representatives and Nancy Pelosi is House speaker, Trump can forget about repealing the ACA via Congress. But Republicans, Krugman observes, have been trying to end the ACA via the Texas v. Azar lawsuit.

“The people who want to take away your health care haven’t given up,” Krugman warns. “The latest attempt is a lawsuit claiming that the 2017 tax cut, which reduced the penalty for not having insurance to $0, somehow made the entire Affordable Care Act unconstitutional. It’s a ludicrous claim…. But the Trump Administration has joined the suit, and a partisan Republican judge has indeed ruled that the ACA as a whole should be struck down.”

Krugman concludes his column by asserting that the “real health care issue this year” isn’t Medicare-for-all versus the ACA — its “will coverage” be expanded “under a Democrat…. or will it be tens of millions of newly uninsured Americans under Trump?”