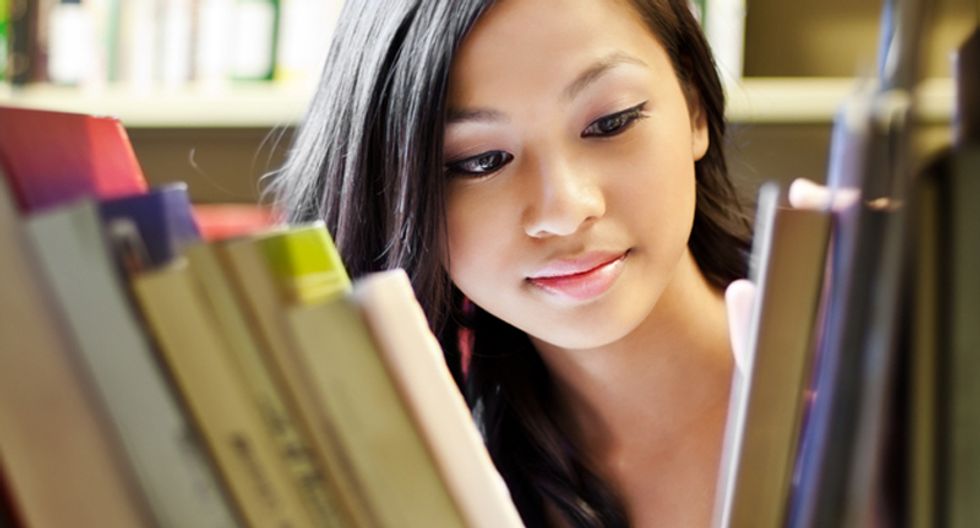 Asian-American student at the library (Shutterstock)

"Every reader and writer in the country should be horrified, absolutely horrified, at this bill."

The Missouri Library Association says it is monitoring a bill put forward in the state House by a Republican lawmaker, which, if passed, could create committees across the state with the power to jail librarians for distributing material the panels deem "inappropriate."

Under the Parental Oversight of Public Libraries Act (H.B. 2044), locally elected "parental library review boards" would be permitted to unilaterally remove books they decide are sexually explicit or otherwise inappropriate for young readers from library shelves.

Libraries that allow children to borrow books that have been banned or whose access has been restricted would risk losing state funding, and librarians could be ordered to pay fines of up to $500 or sentenced to jail time for up to a year.

The Missouri Library Association (MLA), a non-profit which advocates for library service and librarians, said in a statement and on social media on Wednesday that it "will always stand against censorship and for the freedom to read, and therefore opposes Missouri House Bill 2044."

Baker told local radio news station KOAM that the bill came out of his desire to ensure libraries are a "safe environment, and that [children] are not going to be exposed to something that is objectionable material."

"Public libraries already have procedures in place to assist patrons in protecting their own children while not infringing upon the rights of other patrons or restricting materials," Dudenhoffer said. "Missouri Library Association will always oppose legislation that infringes on these rights."

Libraries, authors, and others in the literary community also spoke out about the proposal.

"Books wrestling with sexual themes, books uplifting LGBTQIA+ characters, books addressing issues such as sexual assault—all of these books are potentially on the chopping block if this bill is passed," said James Tager, the group's deputy director of free expression research and policy. "Every reader and writer in the country should be horrified, absolutely horrified, at this bill."

On social media, Tager added that the bill, while only in the early stages of consideration in Missouri's legislature, shows why groups like PEN America are vigilant regarding the fight against censorship.

Others slammed the bill as "absolutely detestable" and "ominous."

Hard to imagine a more ominous name for a bill than the "Parental Oversight of Public Libraries Act." https://t.co/AGvUswrgWe
— Literary Hub (@Literary Hub)1579192634.0

In Cincinnati, the city's public library suggested on its official Twitter account that the bill is a warning that all organizations promoting free expression should "stand with Missouri libraries in the fight against censorship."