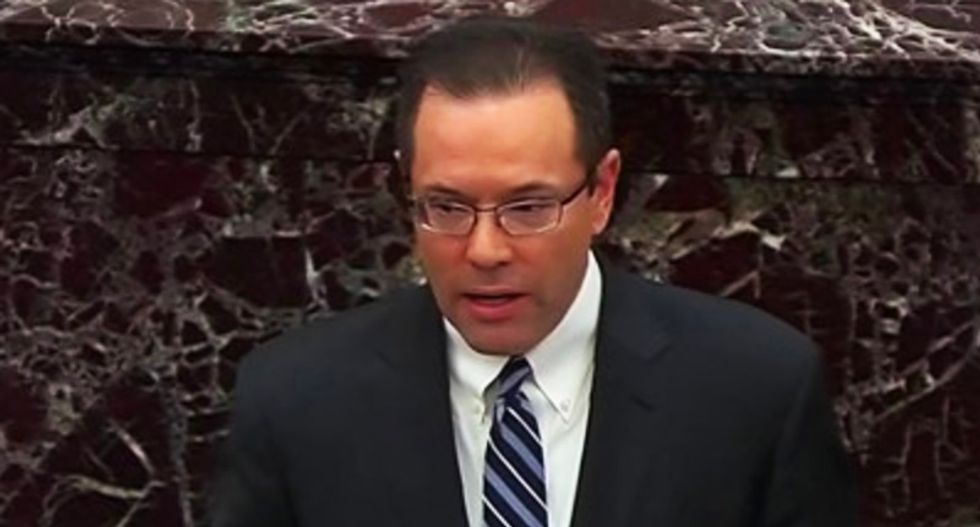 After three days of House impeachment managers’ brilliant prosecution of President Donald Trump – and “prebuttal” of the arguments the president’s team was expected to make – White House attorneys Saturday morning began their defense of President Trump.

Deputy White House Counsel Mike Purpura (photo) has been making the majority of today’s arguments – they have decided that not enough people will be watching on TV so Saturday’s defense will last not eight but just two hours.

Purpura is not doing a good job – unless his job is to lie to U.S. Senators and the American people.

Republican Senators are likely glad to hear yet again the lies spread on Fox News by the White House and its allies, but the American people know better. They know they are lies, and they were only too happy to discredit and debunk them in real time moments after Purpura uttered them on the Senate floor.

It doesn’t take an expert (or a blue check mark from Twitter) to understand facts in this case. In fact, the House’s delay in transmitting the Articles of Impeachment gave the American people more time to digest what they had learned during the impeachment inquiry.

And the American people are very well versed in what facts are – and what the facts in this case are. The president’s attorneys think they can gaslight the America people. Clearly they are wrong.

Dear Mike Purpura. It was not an actual transcript. That's what Trump called it. You sir, are already lying.
— Mama Tried Honey (@Mama Tried Honey) 1579965835.0

#AmericansWantWitnesses Why is Purpura lying with John Roberts sitting behind him? Ukraine Knew of Aid Freeze in J… https://t.co/g5ohlnaefR
— Conrad Sieber (@Conrad Sieber) 1579967184.0

They are lying again. Mike Purpura is saying they should get a gold star for declassifying a call transcript and re… https://t.co/GBDX1JXA1K
— angelavigil (@angelavigil) 1579966253.0

Hey Michael Purpura! So funny starting with the parody! Schiff called it didn’t he! Then attacking the republicans… https://t.co/94KEf9fqPw
— Laurie Evans (@Laurie Evans) 1579967088.0