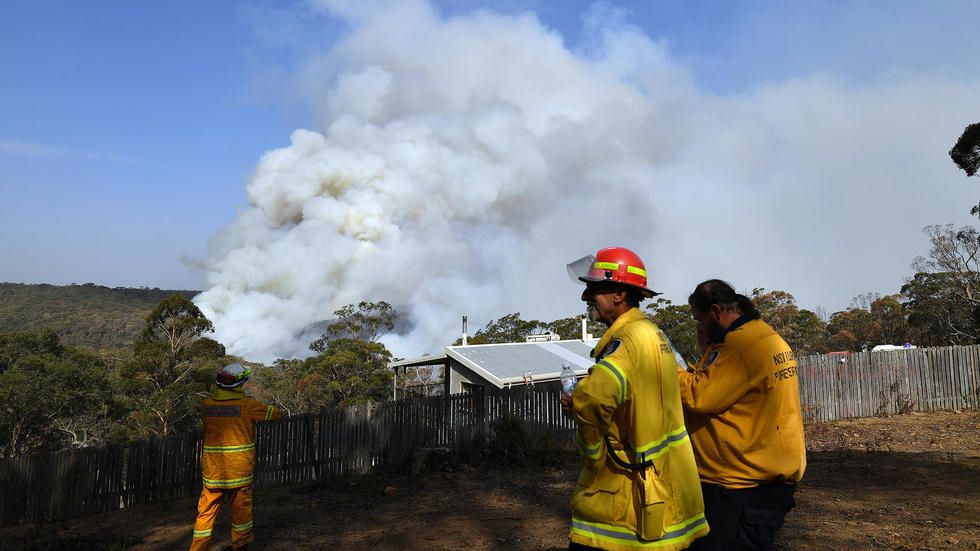 "It's the hot, dry winds that will prove once again to be the real challenge."

Temperatures soared above 40 degrees Celsius (104 degrees Fahrenheit) in parts of New South Wales and neighbouring Victoria, where attention was focused on the two fires that linked to form yet another monster blaze.

A "state of disaster" was extended 48 hours ahead of Friday's forecast of scorching temperatures, and evacuation orders were issued for areas around the New South Wales-Victoria border.

New South Wales Premier Gladys Berejiklian said there were more than 130 fires burning in the state, with just over 50 not yet under control.

On Kangaroo Island off south Australia, the largest town was cut off as firefighters battled dangerous infernos, forcing some residents to flee to the local jetty.

The catastrophic bushfires have killed at least 26 people, destroyed more than 2,000 homes and scorched some eight million hectares (80,000 square kilometres) -- an area the size of Ireland.

University of Sydney scientists estimate one billion mammals, birds and reptiles have been killed in the fires.

The severe conditions have been fuelled by a prolonged drought and worsened by climate change, with experts warning that such massive blazes were becoming more frequent and intense.

Australia experienced its driest and hottest year on record in 2019, with its highest average maximum temperature of 41.9 degrees Celsius recorded in mid-December.

In Sydney and Melbourne, thousands of people again took to the streets to demand Australia's conservative government do more to tackle global warming and reduce coal exports.

"Change the politics not the climate" read one sign, reflecting an increasingly charged argument over the cause of the fires.

Researchers say the bushfire emergency has sparked an online disinformation campaign "unprecedented" in the country's history, with bots deployed to shift blame for the blazes away from climate change.

One hashtag in particular, #arsonemergency, has gained traction rapidly and conservative-leaning newspapers, websites and politicians across the globe have promoted the theory that arson is largely to blame, rather than climate change, drought or record high temperatures.

Timothy Graham, a digital media expert at the Queensland University of Technology, told AFP his research showed half of the Twitter users deploying the hashtag displayed bot- and troll-like behaviour.

"Our findings show a concerted effort aimed to misinform the public about the cause of the bushfires," Graham said.

"The campaign is nothing on the scale of what we have been seeing in other countries, such as the 2016 US election, but this amount of disinformation in Australia is unprecedented."

"Look, we have covered that on a number of occasions now," Morrison said testily, adding that reviews will take place once the bushfire season is over.

Towamba volunteer firefighter Tony Larkings, 65, said battling the fires in recent weeks had been a "hot, dirty and dangerous" task.

"It's been horrendous. It's never been like this before," he told AFP.

He was deeply critical of Morrison's response to the bushfires, calling it mere "lip service" and slamming the leader's response to public criticism.

"His great statement was 'I don't take this personally'. Scott, take it personally," Larkings said.