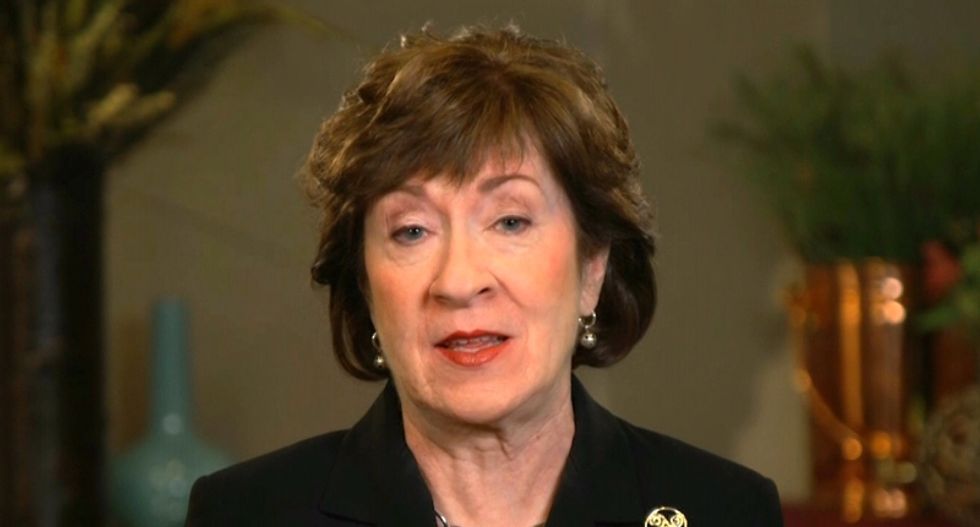 Senate Majority Leader Mitch McConnell (R-KY) announced on Tuesday that he had secured the unanimous votes from his caucus to pass a partisan rules package for the impeachment trial that could allow Republicans to advance straight to a vote without hearing from any additional witnesses — including several Republican senators who had expressed discomfort at McConnell's self-admitted coordination with the White House, including Mitt Romney (R-UT), Lisa Murkowski (R-AK), and Susan Collins (R-ME).

According to Politico, Collins, in particular, justifies her support for rigging the impeachment trial by saying she was annoyed at Minority Leader Chuck Schumer (D-NY) — the key figure trying to persuade her to give a promise of witness testimony — for trying to support a campaign against her re-election in Maine.

"I don't think Chuck Schumer is very interested in my opinion since he's just launched a website in Maine and just committed an additional $700,000 in additional negative advertising from the Majority Forward PAC," said Collins. "I don’t think he’s really very interested in doing anything but trying to defeat me by telling lies to the people of Maine. And you can quote me on that."

It should go without saying that Schumer doing his job as Democratic leader and trying to win more seats in November shouldn't have anything to do with whether the impeachment trial against President Donald Trump for abuse of power and obstruction of Congress is conducted fairly.

Collins, who has generally won re-election with no trouble, has been damaged in polls by her recent support of Trump on key votes, and faces a strong and well-funded challenger in Maine House Speaker Sara Gideon.

McConnell, for his part, has insisted that the rules package he is passing is no different from that used in the impeachment of Bill Clinton in 1998. The difference, however, is that in that impeachment, all relevant witnesses had already been reviewed in the House and in independent counsel Ken Starr's investigation prior to the trial, whereas in this impeachment, Trump managed to block several crucial witnesses from testifying at all, including former National Security Adviser John Bolton and White House chief of staff Mick Mulvaney, and Congress' only opportunity to hear them would be if they are called in the Senate.