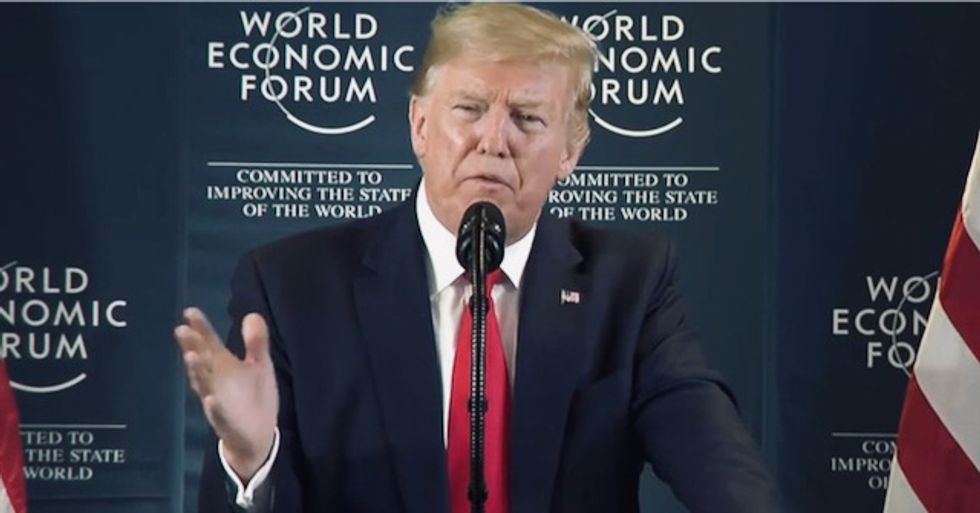 President Donald Trump is now bragging about his blatant obstruction of Congress – while discussing his impeachment trial for obstruction of Congress. Speaking to reporters at the Davos World Economic Forum in Switzerland Trump boasted about having all the documents – and that the House has none – because he's blocked them from being released.

Trump is being impeached for abuse of power and obstruction of Congress. He has refused to hand over to Congress hundreds if not thousands of documents, has blocked at least nine administration officials from testifying, and even refused to comply with lawful House subpoenas.

First, Trump lied about releasing the "transcript" of his call with Ukraine President Zelensky. He has not released the transcript. He has released a call summary, which even says it is not a transcript. He told reporters that "all hell broke loose" among Democrats when he released the "transcript," which is also false. The call summary was what convinced even those Democrats who had been unwilling to support impeachment to support impeachment.

After praising his impeachment attorneys, who lied over and over again while speaking before the Chief Justice of the Supreme Court during Tuesday's Senate impeachment trial, Trump moved on to bragging about obstruction.

Trump admits to obstruction of Congress — one of the impeachment charges against him. “But honestly we have all th… https://t.co/gUTLaqxl9Q
— Minh Ngo (@Minh Ngo)1579702577.0