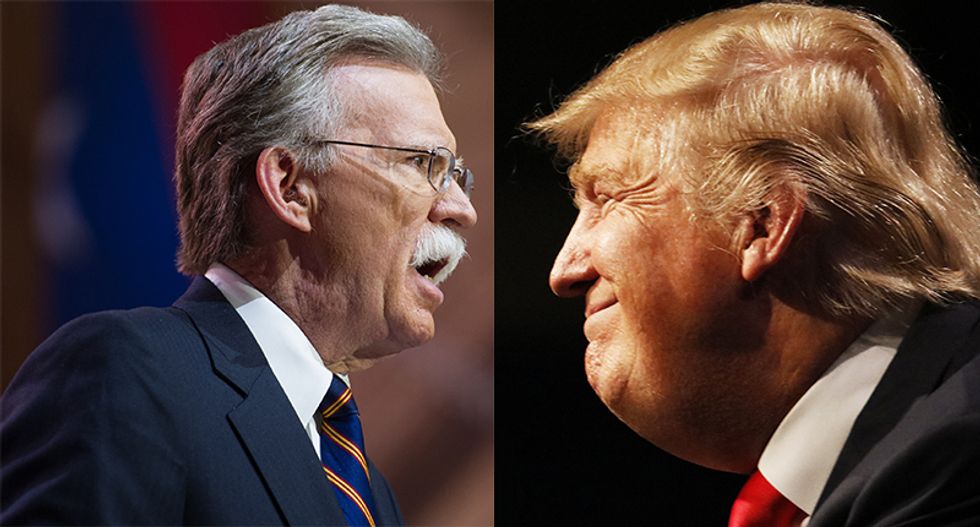 President Donald Trump's White House may be headed for another legal battle, if the email exchange John Bolton's lawyer released is any indication.

This week, the White House released a statement that they sent Bolton saying that parts of his unpublished manuscript are classified.

"The manuscript may not be published or otherwise disclosed without the deletion of this classified information," wrote NSC senior director for records Ellen Knight.

“We do not believe any of that information could reasonably be considered classified,” Bolton's lawyer Chuck Cooper wrote. The word “reasonably” is likely to become the key point of their argument.

Bolton, who refused to testify to the House, has instead been working on the manuscript since he left the White House over serious disagreements with the president.

It was revealed throughout the course of the Ukraine investigation that the president's team was putting all summaries and transcripts of international calls on a secret NSA server that would restrict who had access to them and log a record of anyone who looked at them. The move came after Trump lied about a conversation he had with the Mexican president. Someone within the White House leaked the official call summary proving the president lied.

Bolton has about two dozen pages that deal specifically with the Ukraine bribery scheme. Because the White House isn't transparent about their international calls and call summaries are no longer sent to the press as previous administrations did, most of that information is unknown. Bolton may have inside information about things that aren't actually classified, but the president is attempting to hide.

A Washington Post report explained Friday cited White house officials who declined to comment on whether Bolton was told to delete certain parts of his book.

"A person familiar with the discussions, who spoke on the condition of anonymity because of the sensitivity of the dispute, said Bolton’s team expects a lengthy fight over the issue but appears determined to see it through," the Post reported.

“If the administration simply doesn’t want the manuscript to see the light of day, they could just drag it out far beyond the March publication date,” said DOD speechwriter Guy Snodgrass.

The further the White House delays the manuscript, however, the closer it gets to election day. The last thing the president would want is a damning book published as people are going to the polls.

The other way out is that the president's team could try to declare executive privilege. If that happened, a legal battle would begin where a judge ultimately decides whether Trump's claims of privilege are valid national security concerns or not. Given Bolton's emphatic position that no reasonable person could find the manuscript classified, Trump could lose, and the book could still be released, but with even more free advertising from the president.

“The president has ultimate authority for deciding what is classified and what is not classified, and Mr. Bolton has an uphill battle to convince the president that there’s no classified information in there,” said former NSC records director John Ficklin.

"But people who violate the procedures can face severe consequences," the Post reported. "Courts have allowed the government to seize multimillion-dollar advances and royalties from authors who violated their nondisclosure agreements. The government could also bring charges under the Espionage Act, though that’s rare."

Given Trump's current anger over Bolton and his favorability of execution, it's entirely possible Trump would at least threaten it.